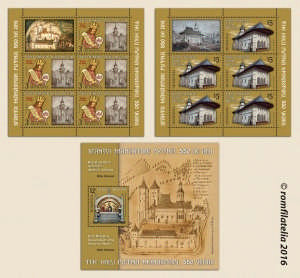 The Putna Monastery is the first and most important foundation of St. Stephen the Great (1457-1504) and has guarded, for over five centuries, the legendary land of Bukovina.
On July 10th, 1466, the cornerstone of the monastery was laid, on an ancient hermitage hearth, on the place where God took the arrow from the ruler’s bow, who fired it from Cross Hill.
“Ruler Stephen the Good, when they started to build the Putna Monastery, shot a bow from a mountain top near the monastery. And where his arrow reached, there the communion table in the altar was laid.” (Chronicler Ion Neculce)
The Putna Monastery’s church, dedicated to the “Dormition”(Assumption), was to be completed in three years and would be consecrated on September 3rd, 1469. The monastery was destined, from the beginning, as the necropolis of the ruler’s family. It was endowed by its founder with many properties and jewels meant to provide for its existence and fulfillment of its spiritual purpose: apparel and liturgical objects, neatly trimmed service books, icons, bells and durable buildings.
The Scriptorium, embroidery workshop, pottery workshop and music school, that existed here during Stephen’s time, are famous.
After the passing of St. Stephen the Great, on July 2nd, 1504, his grave at Putna became a place of worship for all Romanians. In 1992, he was canonized, and in 2010 the monastery received the holy celebration of its founder, on July 2nd as the second patron.
Although, over time, the rulers who followed on the throne of Moldavia themselves supported the monastery, in the 18th century it had reached a declined state. Therefore, the monastic ensemble underwent a major restoration, initiated and supported by Metropolitan St. Iacob Putneanul (1719 – 1778), who thus became the great second founder of the settlement, now in its second flowering years. Having entered at the age of only 12 into the Putna Monastery, he would become a bishop, fearless in defense of his parishioners, a particularly gracious soul and a scholar and teacher of vocation. He printed the first speller of Moldavia, in 1755. He was canonized in the session of the Holy Synod of the Romanian Orthodox Church of June 6-7, 2016, having a feast day of May 15th, the date of his transition to eternity.
Today, the Putna Monastery church houses three royal tombs: Stephen the Great, his son, Bogdan III, and his nephew, Stephen the Younger – Prince Stephen. In addition, within the necropolis other family members of St. Stephen are having their eternal sleep. The tomb of the second great founder, St. Iacob Putneanul is in the church porch, his relics being taken for veneration after his canonization.
In memory of the glorious ruler, considered by Dimitrie Cantemir a “ruler above all praise” in 1871, on the monastery’s dedication day, was held here the first Celebration of Romanians from Everywhere. In organizing the celebration, Mihai Eminescu, the matchless poet of the Romanian nation, made himself noted and synthesized the Putna Monastery’s place in the Romanian’s history, culture and spirituality, calling it the “Jerusalem of the Romanian people”, the site which houses the tomb of St. Stephen being seen as an “altar of national consciousness”.
As each Romanian’s thought heads also to Saint Stephen the Great when it comes to national dignity, none of the visitors can leave the Putna Monastery without passing by his tomb. Here, a silver votive has been alight for centuries, spreading the light of love for God and love of country.
The issue’s stamps illustrate the Putna Monastery, making a bridge between past and present. The stamp with the face value of Lei 3.00 presents the image of an aquatint etching by Antoine Kaindl, 1927, together with an icon painted in the Putna workshop which portrays Stephen the Great, holding in his hand the model of the monastery. The stamp with the face value of Lei 15.00 brings to our attention a current image of the monastery.
The stamp of the issue’s souvenir sheet illustrates the tomb of St. Stephen the Great, together with the image of an 18thcenturywatercolor of the Putna Monastery, which completes the sleeve of the perforated souvenir sheet.
Celebrating this year the 550th anniversary since the laying of the Holy Monastery of Putna’s cornerstone, Romfilatelia offers as a precious gift for collectors and not only, a special postage stamp issue, which can be metaphorically seen as a “ticket” to the show of history and those who have built it for us, their descendants… 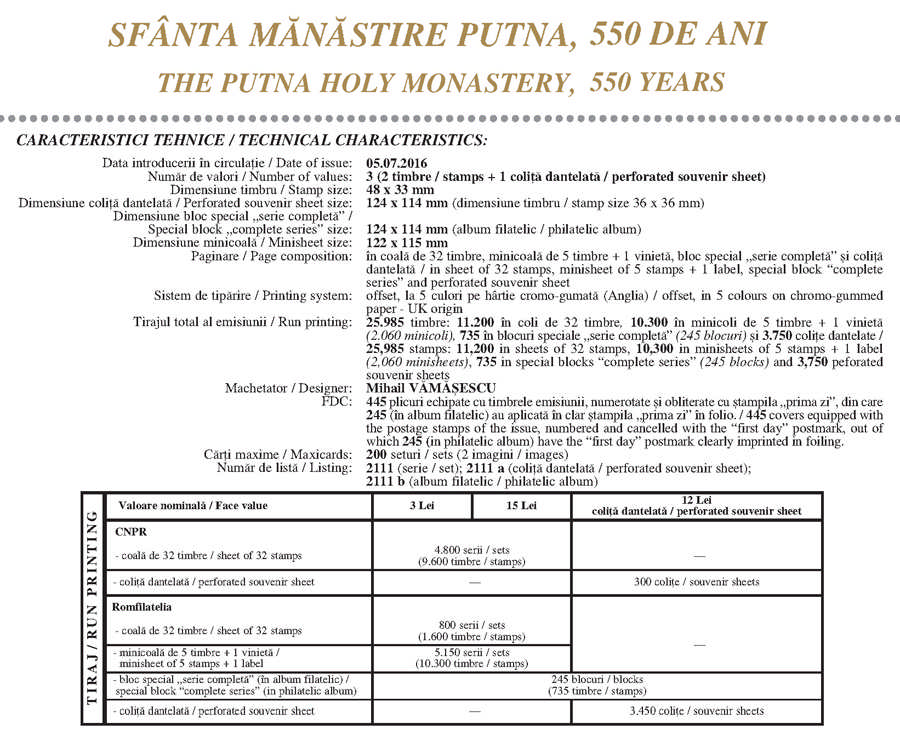