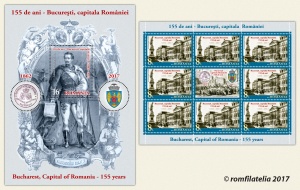 ”There is nowhere else in Romania a larger light centre, a population

with more national and liberal aspiration and an independent public

spirit. Nowhere else could the public opinion have developed

and reign longer than in Bucharest.” (Mihail Kogalniceanu, 1859)

Bucharest, as well as the capital of Moldavia, Iasi, was one of the arenas of the Unionists’ struggle for the creation of modern Romania. Here were held, in 1857, the sessions of the Ad Hoc Assembly of Wallachia, and the national victory was also materialized here in January 1859: the election of Alexandru Ioan Cuza as the prince of Moldavia and Wallachia.

Continuing the series of anniversary postage stamps issues dedicated to the city of Bucharest, Romfilatelia introduces into circulation on Wednesday, September 20th, the issue 155 YEARS, BUCHAREST CAPITAL OF ROMANIA. in its own shops network in Bucharest, Bacau, Brasov, Cluj-Napoca, Iasi and Timisoara and online on https://romfilatelia.ro/store/

The recognition of the two Romanian territories’ union by the Ottoman Empire, at the end of 1861, is followed by the reunion into one of the two Electoral Assemblies in Bucharest in January 1862, by the resignation of the two governments and the formation of the single government, the first government of Romania, this being the name under which the United Principalities would be known henceforth. The one who unswervingly supported Bucharest to become the capital was the great political man of the time, Mihail Kogalniceanu.

By the end of 1862, all the central bodies of the state would be transferred here: administration, archives, chancelleries, ministries, statistical offices, etc. The new quality of the city, officialized on January 24, 1862, will contribute to its increasing development, both from the territorial and demographic point of view, as well as urban, cultural and economical point of view.

An important factor in the modernization of the city was the promulgation of the Communal Law in 1864, during which the City Hall was founded, the first mayor being Barbu Vladoianu.

Changes in the urban area and constructions are obvious. We can observe the appearance of an accelerated rhythm of the constructions. There are new remarkable buildings, such as the National Theater, built in 1852. In 1857, began the construction of the Academy Palace, the future University, an institution that was enacted in 1864.

The citizens of Bucharest have knows all the public lighting systems of the great European cities. A remarcable edilitarian accomplishment was the introduction, in 1857, of the Kerosene lamp for the city’s illumination, Bucharest becoming the first city in the world to be illuminated this way.

The spectactular accomplishment belong in the last years of Alexandru Ioan Cuza reign. In a single year, 1864, the following institutions came into being: the University (whose building would be inaugurated in 1869), the Belle Arte School, the Conservatory, the Antiquities Museum; and in the following year, the future emblem of Bucharest springs up in the lanscape, the Romanian Athenaeum Society.

The stamp of the isuue, having the face value of Lei 8, includes the building of the University in 1938 and the statue of Ion Heliade Radulescu, a distinguished personality of Bucharest, writer, philologist and Romanian politician, founding member of the Romanian Academy and its first president, whom George Calinescu named „the second greatest personality of Romanian literature after Dimitrie Cantemir”.

The souvenir sheet of the issue, having the stamp with the face value of Lei 16, depicts in the medallion the portrait of Alexandru Ioan Cuza. During his reign, on January 24, 1862, Bucharest officially became the Capital of the United Romanian Principalities. The portrait of the ruler is seen from the semi-profile, holding the Constitution in hand. In the background, there is a palace interior with colonnades and antique accessories. The medallion, with 4 anthropomorphic figures, represents women and men in the specific dress of the 19th century and the Crown with the United Principalities Heraldic Symbol. On the middle line of the souvenir sheet (left and right) are the Bucharest seal of 1862, respectively the current coat of arms.

This postage stamp issue is completed by a First day cover and as composition there were used a sheet of 32 stamps, the minisheet of 8 stamps.

Romfilatelia thanks the Bucharest Municipality Museum and Mr. Emanuel Badescu librarian in the Romanian Academy Library – Cabinet of Engravings for the documentary and photographic support granted in the creation of this postage stamp issue.