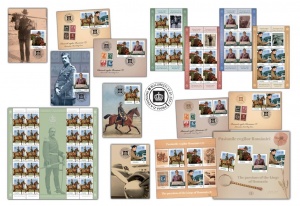 Romfilatelia introduces into circulation on Friday, January 22nd, 2021, a postage stamps issue with an exciting theme: The passions of the kings of Romania (I), which explores the particular interests of Romanian monarchs beyond their official occupations, their involvement in state affairs.

The issue consists of four postage stamps and two “first day” covers of the issue.

King Carol I is known as a passionate of bibliophily and horseback riding. To these were added his practical knowledge of wood and metalworking. When the project for the Royal Palace was completed, the architect Paul Gottereau had in mind three wishes of the sovereign: the throne room to be majestic, the building to incorporate the old palace built by Dinicu Golescu and to reserve an appropriate space to the impressive library belonging to the first king of Romania, counting not less than 60,000 units.

Speaking of horseback riding, we must consider the military education of the monarch, his presence as a true rider on the training grounds and on the battlefield of the War of Independence, to which must be added the impressive military parades, where the presence of Carol I was also a source of inspiration for the Croatian sculptor Ivan Meštrović, author of the statue of Carol I placed in front of the Royal Palace on May 10th, 1939, later demolished by the communist regime.

The first stamp representing King Carol I was issued in 1866.

The personality of King Ferdinand I is closely linked to the moment of the Great Union and the accomplishment of a historical project, the unification of Greater Romania. Passionate reader and endowed with a very good memory, Ferdinand I permanently enriched his knowledge in the fields of art, music and chemistry, to which he added the acquisition of foreign languages: Greek, Latin, English,

Russian and French. But the greatest passion of his life was botany. He was a good connoisseur of the names of many plants from different regions of Romania, both of Latin names and of those in the country’s language. He was in love with the mountain areas, their flora and fauna. He was the owner and author of some valuable herbaria.  The first stamp representing King Ferdinand I was issued in 1917.

A controversial sovereign, Carol II also remains in history for his qualities, those of a man interested in the great culture that he systematically sponsored through the prestigious institution of the Royal Foundations. He was also a pioneer in the systematization of Bucharest (we have in mind, along with the reconstruction of the Royal Palace, the landscaping of the most beautiful park in the capital, Herastrau Park, the inauguration of “Dimitrie Gusti” Village Museum). He voluntarily abdicated the throne twice and was forced to do so for the third time (1940) and ended up spending the rest of his life in itinerant exile.

But one of the king’s greatest concerns was related to what we call philately. He remained in history as one of the most important collectors in the world, both by the theme of the stamps and by the rarity of the philatelic pieces. Starting with the “Bull’s Head” coat of arm stamps, Carol II added to his collection graphic (author’s) stamp sketches, essays and typographic varieties, errors and chromatic variants of the same stamp. It seems that the wealth of his valuable collection allowed him to live a decent life in voluntary exile in Portugal. In recognition of his qualities as a great collector, on the occasion of the EFIRO 1932 Exhibition, the first philatelic block of Romania was issued, the stamp of which reproduces the portrait of Carol II. The first stamp with his effigy was issued in 1930.

A noble passion of King Michael I was that of flying, at the helm of an airplane. According to data provided by the House of Her Majesty the Crown Custodian, the king flew almost a thousand hours. He appears in history as the first monarch in the world to be an aviator, after learning to fly in Ghimbav. He began his training at the age of 20 on a flight simulator. He obtained the international 2nd degree pilot license in 1942 under the guidance of the pilot Traian Udriski. In 1944, King Michael I received the military pilot license, proudly wearing the military uniform of the Romanian aviation at the festivities in the country and abroad.

According to a BBC investigation, in the years of exile, the monarch was forced to earn a living as a pilot. Thus, in the 1950s, while living in Switzerland, he obtained the position of professional pilot on US multi-engine aircrafts, being employed as a pilot by the Geneva Branch of the American aviation company Lear Jet, having the obligation to perform test flights to check the flight instruments.

As a last homage to the aviator king, the Royal Train that transported his remains to Curtea de Arges was accompanied for a good while during its journey by aircrafts of the Romanian Aeroclub.

The first stamp with his effigy was issued in 1928 and represents him as a child, at the age of 7.

Each of the two “first day” covers of the issue brings together in a graphic composition stamps representing the four monarchs of Romania, issued during their reigns: between 1920 and 1944 (the first cover) and between 1909 and 1945 (the second cover).

Romfilatelia thanks the House of Her Majesty the Crown Custodian, the Peles National Museum and Mr. Daniel-Cosmin Obreja, the Library of the Romanian Academy, the National Museum of Romanian History and the Cotroceni National Museum for the documentary and photographic support provided to the development of this postage stamps issue.

The philatelic album is created into a limited run printing of 251 pieces and is equipped with the special block of 4 perforated stamps + 4 labels of the issue and the set of two First Day Covers with the postmark cleary imprinted gold foiling. Both products are numbered from 001 to 251.

The postage stamps issue “The passions of the kings of Romania (I)” will be available on Friday, January 22nd 2021, in Romfilatelia’s shops network in Bucharest, Bacau, Brasov, Cluj-Napoca, Iasi and Timisoara and online on https://romfilatelia.ro/store/. The postage stamps issue is completed by two “first day” covers, sheet of 20 stamps, minisheet of 5 stamps + 1 label and special block of 4 perforated stamps + 4 labels. 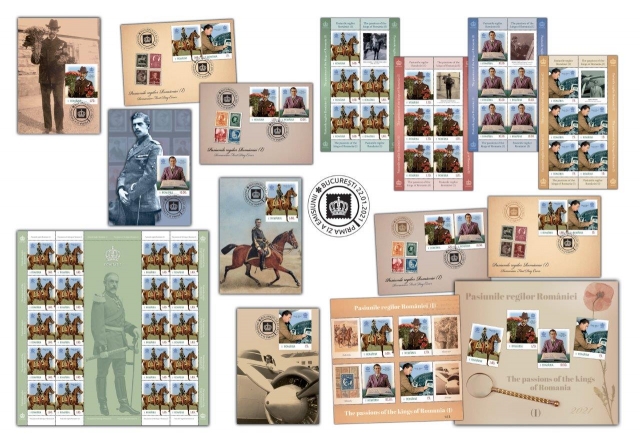 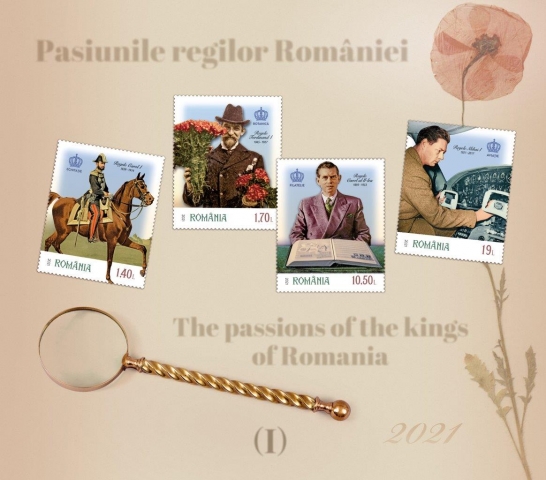 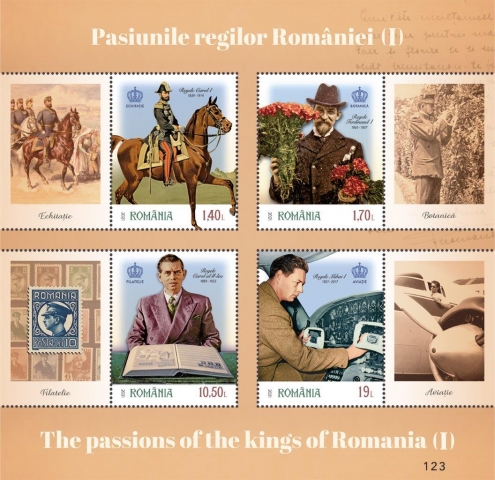 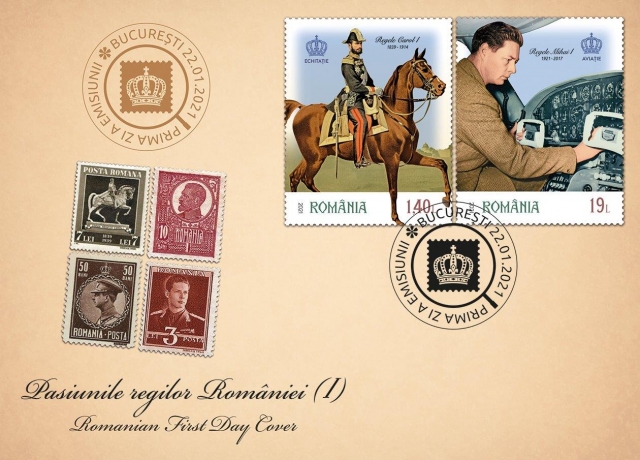 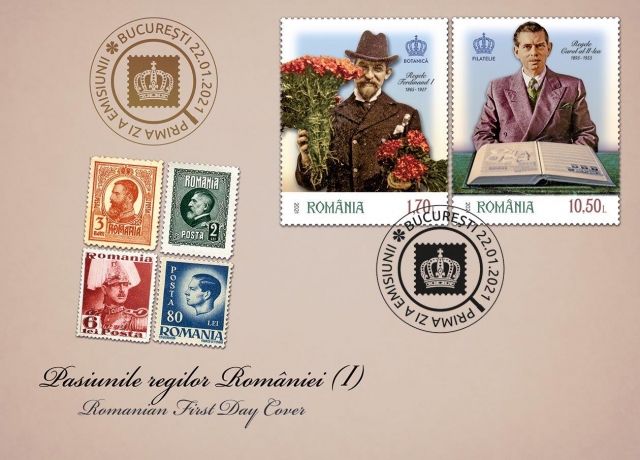 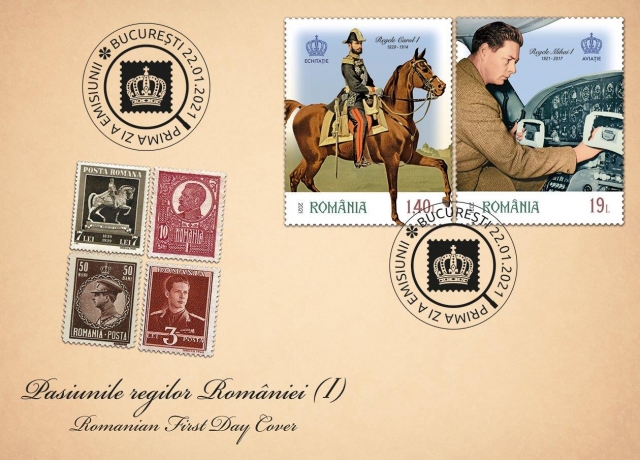 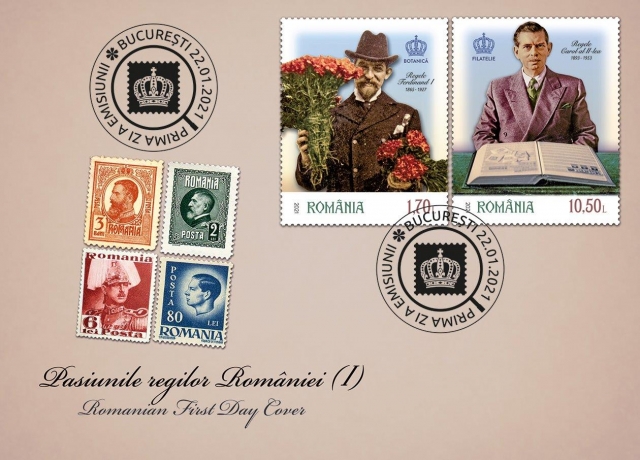 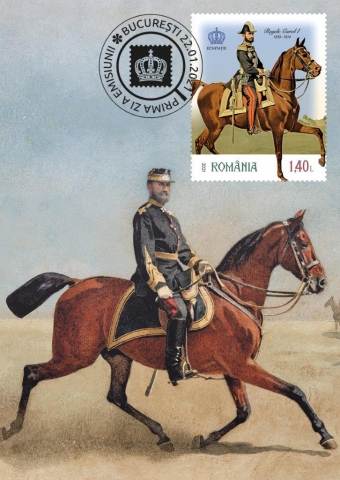 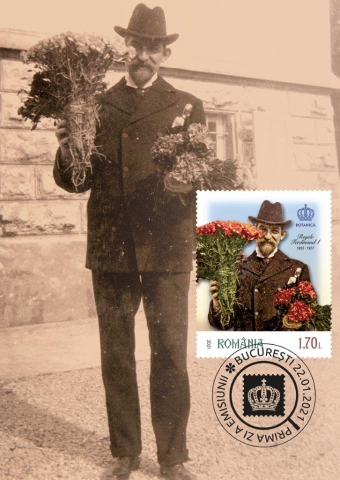 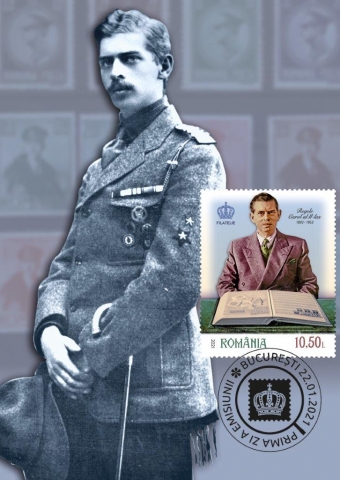 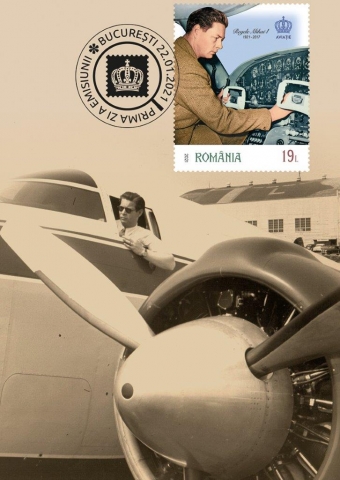 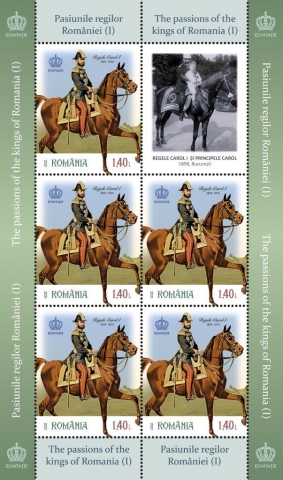 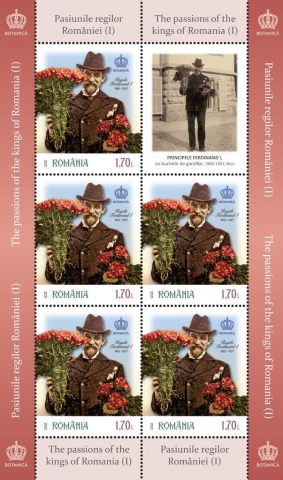 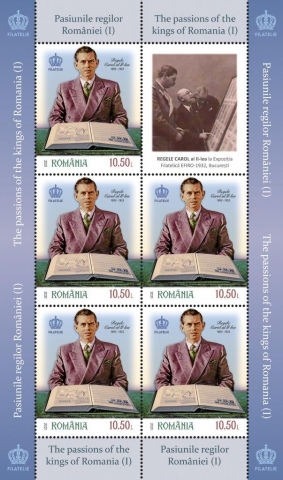 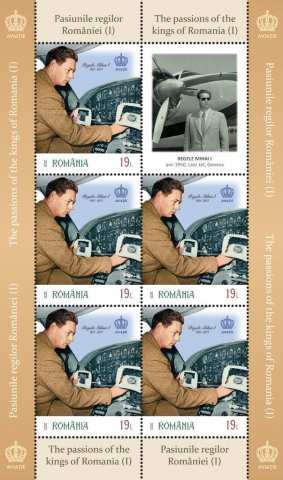 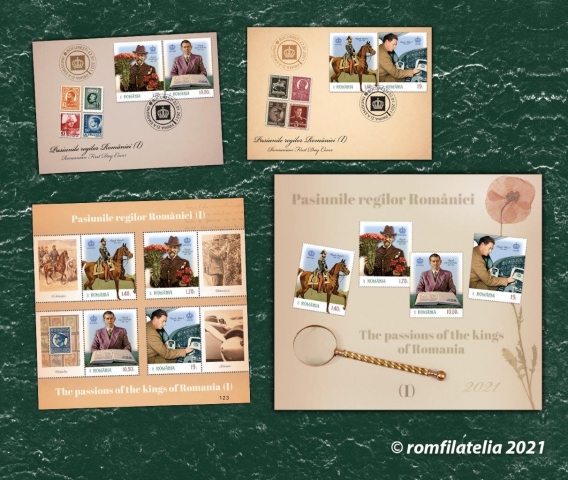 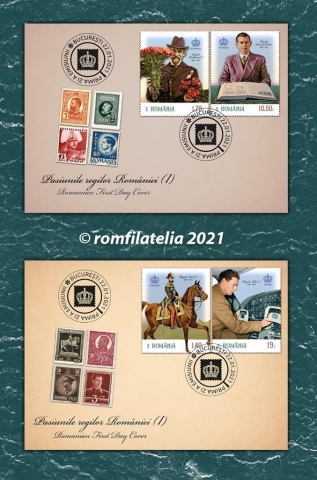 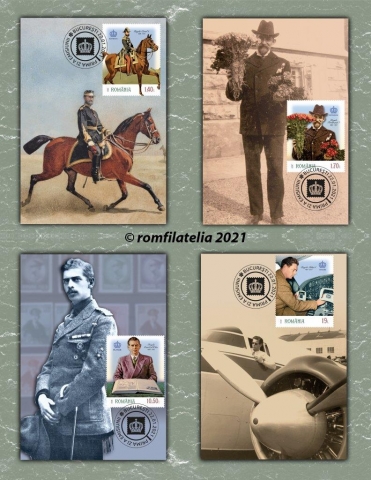 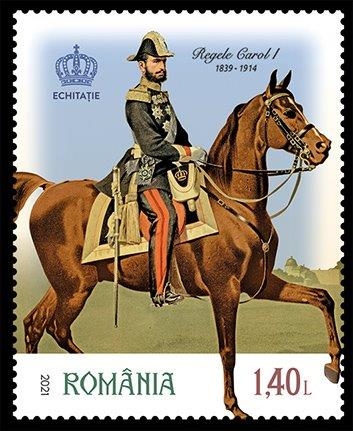 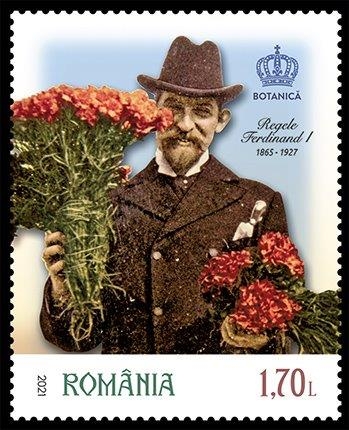 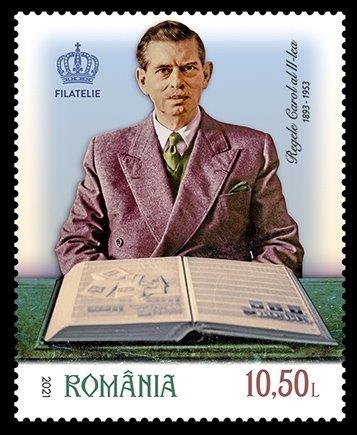 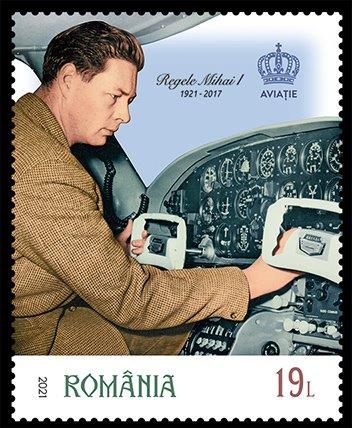