Lost in the mist of times, the legends about the founding of Bucharest bear till our present days the mystery of the first beginnings. And probably the most famous and widely accepted is the one of Bucur the Shepherd (Bucur Ciobanul).
The first mention of the existence of Bucharest settlement dates back to 20th of September 1459 and it is included in a letters patent of Vlad Tepes, whereas the oldest document which attests “the Citadel of the Throne Bucharest”, dates from 14th of October 1465 and belongs to Radu the Handsome (Radu cel Frumos).
Establishing the princely residence in Bucharest has had a decisive role in the subsequent evolution of the settlement. From the 15th century the surface of the city is doubled and merchants’ districts appear in the Sf. Gheorghe, Unirii Square, Coltea and “Ulita Mare” areas, the Lipscani street of present days.
Even if it was badly affected by the numerous natural disasters and foreign occupations, the city continued to develop, becoming one of the main urban centers of SE Europe. The 18th century is the century in which the first manufactures emerged.
The 1821 Revolution marks the beginning of the city’s modern history.
In 1830 the “City Council” is established and the city is divided in five areas (districts), and in 1846 the city hall establishes the first Cadastre Plan of the city.
Bucharest is the first city in the world that, in 1857, had streets lighted by gas lamps. From 1862 onwards when it became the capital of the young Romanian state, the city enters in a new development phase. After the 1st of December 1918, when Ardealul was unified with Romania, the city becomes the capital of the Great Romania.
In 1869 the first Bucharest-Giurgiu railway is inaugurated together with the first railway station built in Bucharest, the Filaret Station. Subsequently Targovistei Station was built (1870), today known under the name North Station.
In 1882 the electric public lighting was introduced and in 1892 the electrical plant Grozavesti was built. In 1894 the first electric tram line is inaugurated.
Under the rule of Charles I (1866-1914) are built important buildings, representative for the city, such as: the Romanian Athenaeum, the Charles I Foundation, the Posts Palace, the Palace of Justice, the Sturdza Palace, the Patriarchy Palace, the CEC Palace, the National Military Circle, the Hotel Athenée Palace.
After officially proclaiming the Romanian Kingdom, Bucharest becomes one of the most beautiful capitals from this part of Europe, which due to its cultural life, the atmosphere of a cosmopolite city but also due to its architecture it was named “The Little Paris”.
On the stamp with the face value of RON 0.30 are illustrated the vestiges from Curtea Veche (the Old Principal Court), along with the portrait of the ruler Vlad Tepes and of the letters patent in which the existence of a town named Bucharest is mentioned for the first time.
On the stamp with the face value of RON 0.50 the Sturdza Palace is pictured, the former headquarters of the Ministry of Foreign Affairs, established between 1897-1899 by the architect Julius Reinecke. The Palace was destroyed following the American bombardment on April 4th 1944.
On the stamp with the face value of RON 0.70 the building of the National Military Circle is illustrated, built in a French Neoclassical style, in 1912, after the designs of the architects Victor Stefanescu, Dimitrie Maimarolu and Ernest Doneaud.
On the stamp with the face value of RON 1.60 is illustrated the image of the former National Theatre, bombed by the American aviation on April 4th 1944. The building is the work of the Viennese architect Anton Hefft and it was inaugurated in 1852; at that time it was the third theatre, in size, from Europe.
On the stamp with the face value of RON 3.10 an overview image of the I.C. Brătianu Square is represented (today, the University Square).
On the stamp with the face value of RON 4.70 The Senate Square (today the United Nations Square) is represented, with the Adriatica and Agricola buildings, designed by the architect Petre Antonescu, built between 1928 and 1930.
On the souvenir sheet of the issue the symbol of the Romania’s
capital is included, recently inscribed in the cultural patrimony of the European Union, i.e. the Romanian Athenaeum. Built between 1886 and 1888, after the designs of the French architect Albert Galleron, the building is preceded by a peristyle, supported by six Ionic columns. Under the peristyle there are five mosaic medallions representing the country’s five greatest princes: Neagoe Basarab, Alexandru cel Bun,  Vasile Lupu, Matei Basarab and the King Charles I. The building ends with a richly adorned dome. The postage stamp of the souvenir sheet has the face value of RON 5.60.
We thank for the granted support to the Museum of Bucharest. 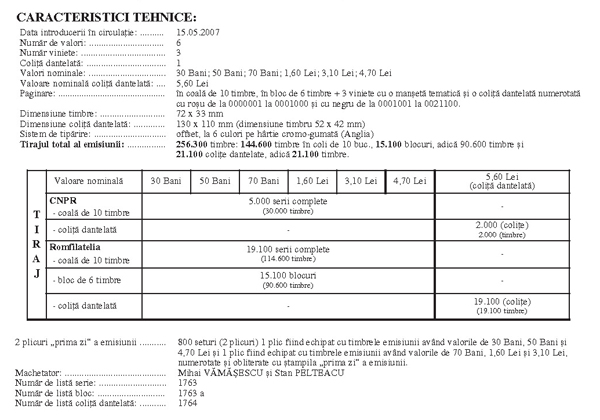