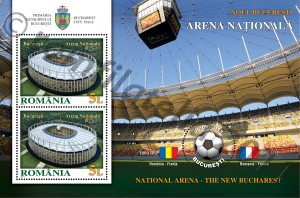 The biggest stadium, both in Bucharest and Romania, will be inaugurated in September 2011, and, on this occasion, Romfilatelia introduces into circulation a postage stamps issue dedicated to this event.

The biggest stadium, both in Bucharestand Romania, will be inaugurated in September 2011, and, on this occasion, Romfilatelia introduces into circulation a postage stamps issue dedicated to this event.

The former “23 August” Sports Centre – located, until 2007, on the place of the current National Arena – was built in less than a year for the World Festival of Youth and Students held inBucharest, in 1953.

The stadium, with a capacity of 80,000 seats, was built “by volunteers” and, because of the very limited time required for its construction, it had no foundations. It was built directly on the ground; nevertheless, it hosted important events, among which the Universiade in 1981. On this stadium also took place matches of the Romanian National Football Team and imposing demonstration dedicated to the country ruler on that time.

In 1990, the stadium was named “Lia Manoliu” and, until its demolition in 2007, it hosted many concerts of famous singers and bands worldwide.

Nowadays, in 2011, after four years of hard work, the Romanian capital city can be proud of an UEFA standards stadium, which will be inaugurated on the occasion of the Romania – France football match within EURO 2012 Preliminaries (6th of September 2011).

With a gross built-up area of almost 110,000 sqm and a capacity of 55,000 seats, two standing tiers (upper and lower tiers), 40 VIP boxes, including bars and restaurants, the National Arena has a modern retractable roof made of membrane on a steel cable structure. The semitransparent membrane (9,700 sqm) allows natural lighting on the stadium during daytime and can be opened or closed in only 15 minutes. The metallic cables supporting the roof weigh 700 tons. At roof level can be found four video screens 30 sqm each.

The new stadium will host grand sports events and music concerts of famous bands and artists, both Romanian and foreign.

In 2012, the National Arena will host the UEFA Europa League final.

Through its achievement, the National Arena becomes not only the largest and most modern stadium inRomania, but also a landmark construction of the Romanian capital city.

We would like to thank the Bucharest City Hall for the documentary consultancy granted in the accomplishmentof this postage stamps issue. The photographic support was provided by Laurentiu Balaceanu. 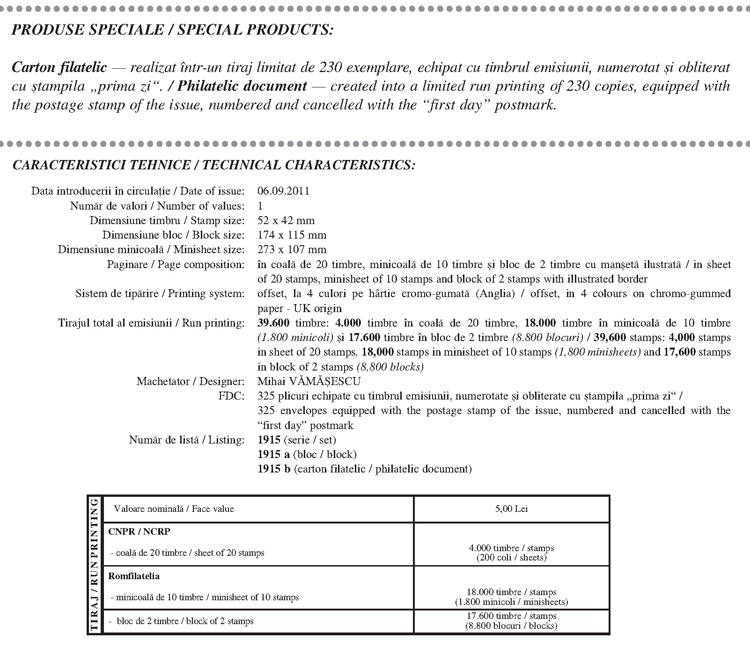