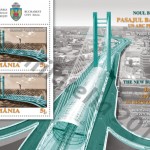 The idea of this overpass dates back to 1930, but what materialised in the ‘40s was just a metallic walkway from Basarab, stretching almost 100 m over the railways.

Today, the new overpass is running as an arch overplaces where the old neighbourhoods of Bucharest arose.

Their history begins in 1863 when Effingham Grant, secretary of the British consul in Bucharest, married to Ana Golescu’s daughter, builds the first foundry in Bucharest near the “Ground Barrier” or “Belvedere Alleyway”,as it was called. In that period, Grant also brings and plants orchids in the garden of his villa (the only ones in Bucharest at that time) and, for this reason, the name Basarab Road was changed into Orhideelor Road (Orchids Road).

In 1864, the “Belvedere Tobacco Manufacture” was established and in 1879 it will be called the “Administration of State Monopolies” and hence, the name of an entire neighbourhood – “Regie”. Grant parcels out the lands in the area and gives them to the railway company employees, subsequently appearing here “Grant” and “Giulesti” Neighbourhoods. In 1912 the Grant Bridge was built and, in 1982, it was replaced with a new structure.

Today, the Basarab Overpass is not only an arch over time and history, but, most likely, it will become one of the landmarks of the capital.

The overpass 1450 m long is itself a work of art which also holds two of the European records i.e.: the cable-stayed bridge of the overpass is the widest of a kind in Europe, having 44 m and it is the only cable-stayed bridge on the continent where a tramway stop is disposed (access to the ground level, where connections to public transportation means, the subway and railway transportation are ensured).

The cable-stayed bridge is 365 m long and is supported by two pillars, each being 80 m high and provided with 30 stays placed on each side of the pillars.

The arched bridge over Dambovita River is 124 m long and its deck is supported through rubber bearings by abutments, under which there are 40 m deep columns. The arch opening is 118 m.

Between the two bridge-structures, unique in Romania, the road traffic and the tramway circulation take place on a post-stressed reinforced steel concrete viaduct of 1500 m long, including also the access ways; the access ways are also stressed by an innovative method, and, just as the bridges, benefits of an advanced earthquake protection system used for the first time in Romania.

Basarab Overpass connects Nicolae Titulescu Boulevard and Grozavesti Road and will improve the road traffic in this area, therefore completing the main North-West traffic ring of the town.

By its construction, Basarab Overpass becomes the largest intermodal point in Romania, joining tramway lines on the bridge and under the bridge, bus and trolleybus lines, subway lines, two railway stations and bus terminals for domestic and international transportation.

We kindly thank the Bucharest City Hall for the documentary support granted in the accomplishment of this postage stamps issue. At the same time we also want to thank the photographer Laurentiu Balaceanu. 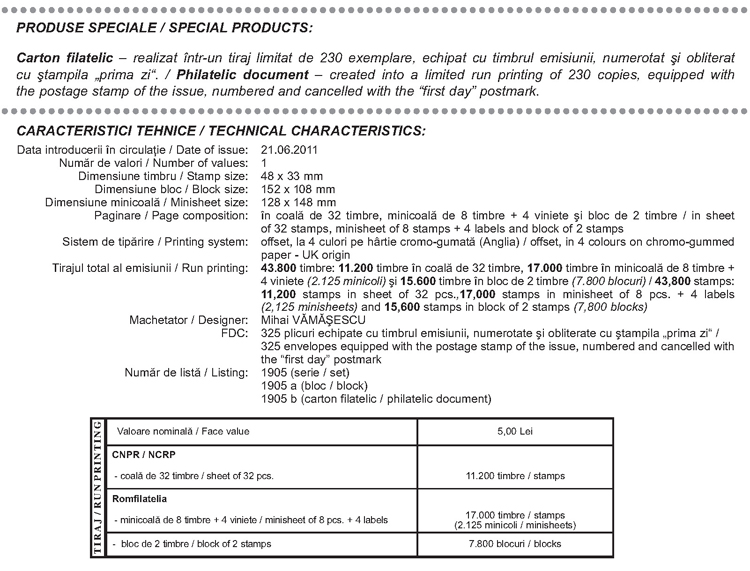