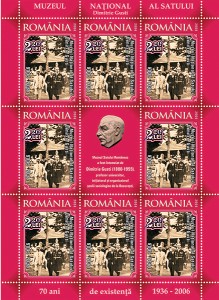 Romfilatelia introduces into the postal network a postage stamps issue dedicated to the National Village Museum “Dimitrie Gusti” that celebrates 70 years since its foundation.

In 1936, in Herastrau Park of Bucharest, one of the first outdoor ethnographic museums of Romania and of the World was created: The Village Museum.

The idea of the type of institution represented by the Village Museum is the materialization of the European theory of Frédéric le Play and of his School on a “social museum”, a “museum village” &#8211; as seen by Dimitrie Gusti and his disciples &#8211; that aggregates the features and the identity of all the villages of Romania.

The creation of the Village Museum is the result of intense and sustained theoretic and practical research, as well as of some museographic experiments dating more than a decade ago, coordinated by professor Dimitrie Gusti, founder of the Sociologic School of Bucharest.

Based on these experiments, on an assiduous conception activity and on the moral and material support of the Royal Foundation “Prince Charles II”, of March 1936, after only two months an exceptional museographic work was achieved: The Village Museum. In this short time interval, the teams of specialists and students managed by professors D. Gusti and H. H. Stahl purchased from the researched villages peasant constructions (houses, household facilities, churches, technical installations) and interior objects (furniture, ceramics, fabrics, tools), considered to be representative for their places of origin. The purchases, which are entirely original, are evidences of the Romanian traditional life, but, at the same time, these illustrate a certain museological conception and of preservation of the built patrimony; these have been illustrating the road covered since the first researches coordinated by Dimitrie Gusti until now, a road spread with another 18 museums inspired from it.

The official opening of The Village Museum took place on the 10th of May 1936, in the presence of King Charles II, and for the public, one week later (17th of May 1936).

Since its foundation, The Village Museum have had a strong impact on the international scientific world. After less than one year since its inauguration, in February 1937, Gusti and his collaborators &#8211; who had contributed to the foundation of the museum &#8211; were invited to participate, with a selection of representative objects for the Romanian popular culture, in the International Exhibition in Paris, in a pavilion reserved for Romania. Moreover, the Romanian specialists were provided with an additional space, at Porte Maillot, in an exhibition called “The Rural Lodging”. On the part dedicated to Romania, at Porte Maillot, the commissaries of the exhibition, H.H. Stahl and V.I. Popa, rebuilt, out of original pieces, among which a monumental Maramure&ordm; Gate and a house façade, by means of models and dioramas, a corner of Romanian village. Also the a scale model of The Village Museum was exhibited in order to announce the emergence of a new museum on the world museums map and to arouse the desire of the public to visit it, to get acquainted to it.

Today, the National Village Museum “Dimitrie Gusti” exhibits for its visitors more than 300 buildings (peasant households, outbuildings, churches, etc.) that cover 10 hectares of the 12.5 hectares of the entire surface of the museum space.

Due to its size, it has become one of the most significant museums of the kind in Europe, attracting year by year numberless Romanian and foreign tourists.

As recognition of its prestige at the international level, the National Village Museum “Dimitrie Gusti” is a member of international bodies and associations, among which the European Association of Outdoor Museums, affiliated to U.N.E.S.C.O.; I.C.O.M.; I.O.V. (International Organization of Popular Art).

For this postage stamps issue have been used documentary materials and photos, put at our disposal by the National Village Museum “Dimitrie Gusti”.