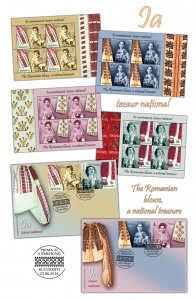 The Romanian blouse, as simple as its cut is, so is its profound meaning. It is not just a basic piece of the feminine folk costume or strictly a traditional piece of clothing, but much more: it is a national symbol, a story, a history book.

The Romanian blouse is the traditional shirt, bequethed by our ancestors, which is carefully worn from one generation to another to transmit and preserve as much of its spiritual symbolism and energy. It is the perfect mix of balance, beauty and tradition, a piece of clothing which not only stood at the basis of the Romanian folk culture, but was also a common witness to the writing of the national history pages, being proudly worn by Romanian women regardless of their age, social, civil, marital, religious and regional status.

Recognizing the historical and cultural importance of the Romanian blouse, as well as its high significance at a national level, which often exceeds the country’s borders, Romfilatelia dedicates its latest stamp project to this Romanian symbol, the philatelic issue being suggestively entitled The Romanian blouse, a national treasure. The project can be purchased starting with Wednesday, June 22nd, 2016, in Romfilatelia’s stores in Bucharest, Bacau, Brasov, Cluj-Napoca, Iasi and Timisoara.

The postage stamp issue The Romanian blouse, a national treasure illustrates in an original graphical approach four female Romanian personalities who have worn the Romanian blouse with pride and made it known abroad.

The stamp with the face value of lei 3.50 presents Queen Elisabeta of Romania wearing a Romanian blouse specific to the Romanati area, Olt county, with a small collar and embroidery on the top of the sleeve, made up of ribbons braids in a repeating “S” pattern. The decorative elements are geometrical, floral and anthropomorphic, while chromatically predominates the ultramarine, with alternate gold metallic thread.

The stamp with the face value of lei 4 depicts Queen Marie of Romania wearing a Romanian blouse from Dolj county. She dressed in traditional garb, along with members of the royal family or the ladies of the court, truly admiring the Romanian traditions and the folk costume which she made popular across the national borders. The Romanian blouse worn by the queen is characterized by chromatic harmony, geometric motifs and vivid tones of blue, red and white. The ornamentation is arranged particularly on the sleeve, on the “altita” (the embroidery at the top of the sleeve), on the “incret” (the ornamentation on the sleeves of Romanian blouses, made between the “altita” and “rauri”) and on the “rauri” (vertical embroidery which runs like a river across the chest of a Romanian blouse).

The stamp with the face value of lei 4.50 illustrates Smaranda Braescu, the first Romanian woman paratrooper with a patent, wearing a Romanian blouse from Muscel, Arges county. Smaranda Braescu was well known at that time for her love of the traditional folk costume, which she considered the best gala outfit, both at home and abroad. The Muscel female shirt is made of raw silk, pleated at the neck, with a drawstring over the folds, and the material used for sewing is the “arnici” (twisted and colourful cotton strand, painted scarlet, black, red, burgundy and purple, colours specific to the Muscel area).

The stamp with the face value of lei 16 represents Maria Tanase, the magic bird of the Romanian folk song, who loved the national customs and traditions, taking the Romanian blouse abroad, where it was admired and applauded. Maria Tanase wears a shirt from Padureni, Hunedoara county, in a colour combination of white, black and red, with discreet tones of purple, light blue and green. The blouse’s ornamentation is made in geometric motifs, which give the sow a rich, embossed look.

The stamps are completed by a set of two first day covers, and as page composition were used the sheet of 20 stamps and the minisheet of 4 stamps with illustrated border.

Romfilatelia thanks the Royal House of Romania, the National Museum of Romanian History, the “Dimitrie Gusti” National Village Museum, the National Romanian Peasant Museum and Mr. Emanuel Badescu for the documentary support granted in the creation of this postage stamp issue.