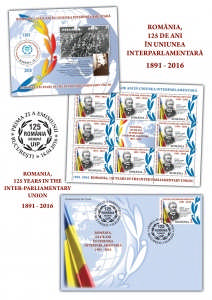 Romfilatelia adds to the Romanian stamp heritage a new project registering an important anniversary for our country, namely 125 years of Romania’s presence in the Inter-Parliamentary Union, global organization acting in favor of peace and international cooperation.

Initially bearing the name of Inter-Parliamentary Conference, and later the Inter-Parliamentary Union (IPU), this worldwide forum was created at the initiative of two parliamentarians, advocates of world peace, William Randal Cremer (United Kingdom) and Frédéric Passy (France). In 1889, the two were joined by 11 parliamentarians from Italy, Belgium, Spain, Denmark, Hungary, United States of America, Liberia, 55 from France and 28 from Great Britain, thus tranforming IPU into a permanent institution.

Today, the organization brings together 170 parliaments of the Member States and 11 associate members, with objectives addressing issues of global concern, such as international peace and security, human rights, youth involvement, gender equality, sustainable development by means of dialogue, cooperation and action at a parliamentary level.

The anniversary postage stamp issue Romania, 125 years in the Inter-Parliamentary Union celebrates our country’s presence within the global organization, the Romanian Parliament joining IPU in 1891, at the Third Inter-Parliamentary Conference held in Rome, and can be purchased starting with Monday, April 18th, 2016, in Romfilatelia’s stores in Bucharest, Bacau, Brasov,
Cluj-Napoca, Iasi and Timisoara.

The perforated souvenir sheet of the issue marks an important moment of Romania’s history in the Inter-Parliamentary Union, namely the 27th Inter-Parliamentary Conference, held in Bucharest in 1931, when participants were greeted by the historian and politician, Nicolae Iorga, as Romania’s Prime Minister at that time. The stamp of the souvenir sheet illustrates IPU’s logo, in a graphic round perforation concept.

The issue is completed by a first day cover, and as page composition were used the sheet of
32 stamps, the minisheet of 8 stamps + 1 label and the perforated souvenir sheet.

Romfilatelia thanks the Parliament of Romania for the documentary support granted in the creation of this postage stamp issue.