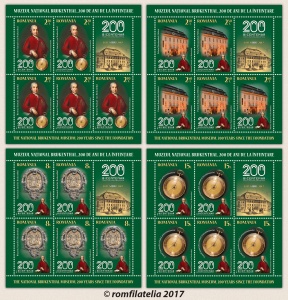 Celebrating 200 years since the opening of the National Brukenthal Museum, Romfilatelia diplays you a glimpse of its history through the anniversary issue of four postage stamps.

Baron Samuel von Brukenthal (1721-1803) was the only representative of the Transylvanian Saxon community who was awarded a major public office in the Austrian state led by Empress Maria Theresa (1717-1780). The Baron von Brukenthal’s basic collections (comprising paintings, a library and a coin collection) arose primarily in the period between 1759 and 1774.

Appointed as Governor of the Principality of Transylvania, a position that he occupied between 1777 and 1787, Samuel von Brukenthal built a Late Baroque palace in Sibiu, modelled on the palaces in the imperial capital, Vienna. The entire structure of the Brukenthal National Museum of today has evolved over time from a single core and a unique location: the Brukenthal Palace.

The portrait of Baron Samuel von Brukenthal, depicted on the stamp with the face value of Lei 2.20 was painted by Johann Nepomuk della Croce, in 1766, in the manner of aristocratic portraits, with bright accents highlighting the forehead and hands in the foreground. The portrait is the first representation of Baron von Brukenthal in painting, the Order of St. Stephen, the monogrammed ring with the initials of Empress Maria Theresa, document and inkpot in the composition suggesting a career in the ascendance, confidence, dignity and sobriety.

The stamp with the face value of Lei 2.50 illustrates the Brukenthal Palace façade bearing the Baroque style imprint: attic in three steps, with numerous decorative elements, horizontal profiles, double pilasters, garlands and boxes, executed in stone. The exceptional piece which delimits the main entrance is the stone portal, flanked by pairs of columns. The entire doorway is the work of Cluj-born sculptor Simon Hoffmeyer.

The Brukenthal family crest is shown on the stamp with the face value of Lei 8.00 The crest speaks eloquently about the evolution of the Brukenthal family and dominates the stone portal, alongside decorative elements such as garlands and urns crowning pillars supported by rosettes.

The pocket watch of Baron Von Brukenthal represented on the stamp with the face value of Lei 15.00, is the symbol of the bicentennial year 2017 because, like the museum, it continues to run throughout the centuries. The piece was made in the period 1780 – 1800, in the workshop of Geneva watchmaker Jacques Ruegger. The housing and the two back lids are made of gold as well as the dial, the latter showing embossed geometric and plant motifs, Arabic numerals and thin arrow hands.

Inside the watch there are two independent mechanisms that are still functional, one of the watch itself, the other one being a musical device cylinder. The song the watch plays reproduces variations of “Carnival in Venice” by Niccolň Paganini.

Romfilatelia thanks the National Brukenthal Museum for their documentary support granted in the creation of this postage stamp issue. 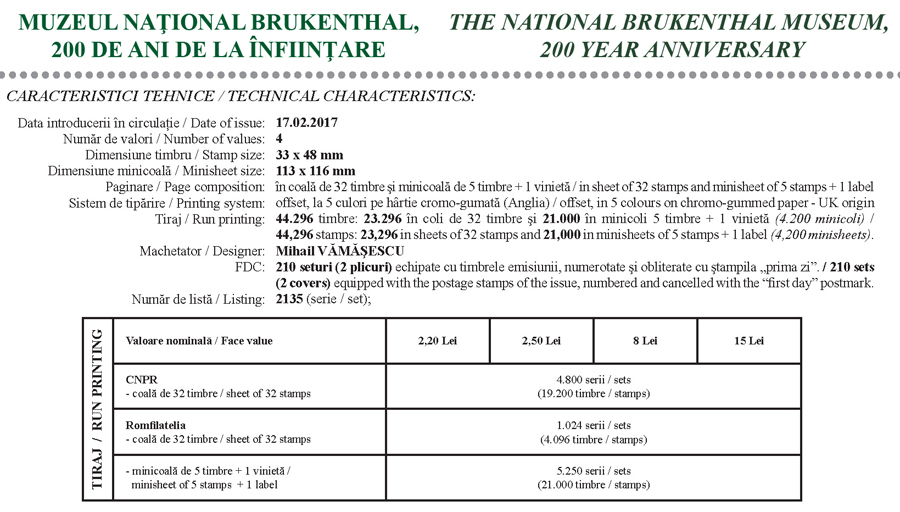