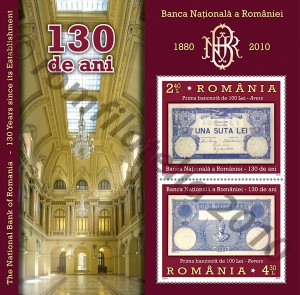 The National Bank of Romania (NBR) was established in 1880 by the Law on the establishment of a bank for discount and circulation, debated and voted by Parliament (March-April), promulgated by Prince Carol I (11/23 April) and then published in the “Official Gazette” (17/29 April 1880).

The operations performed by the NBR governed by its Statutes, published in May 1880, include: note issuance, discounting commercial paper and treasury bonds, trade in precious metals, taking holdings on current accounts and securities into custody. At the helm of the institution was appointed a Governor, assisted by the Board of Directors and the General Board. Ion I. Campineanu was designated as the first Governor.

In the autumn of 1880, the first NBR banknotes were issued. In fact, they were the former mortgage notes issued in 1877 on which the Bank overprinted its name and the signatures of the Governor, the delegated auditor and the head cashier. A year later, the NBR printed the first banknotes in its own workshops, with the face values of Lei 20, Lei 100 and Lei 1,000.

By the time World War I broke out, the NBR had constantly supported the fledgling Romanian economy by providing the necessary capital to perform specific activities in key fields.

During 1916-1918, given the predicament caused by the loss of its treasure, the NBR supported the Romanian State in covering war costs.

After the 1918 Grand Union, the NBR expanded its network across Romania; therefore, the domestic capital succeeded to penetrate all economic sectors. Even in the context of the Great Depression of 1929-1933, the NBR retained a balanced position and succeeded in steadily supporting both the State and the economy as a whole.

When the communists seized power in the aftermath of World War II, the NBR was subject to nationalization and lost its independence, becoming a mere instrument to implement the communist government’s monetary and credit policy.

Since 1990, the NBR has gradually resumed its functions as an independent central bank. This rather difficult process, given the social and economical conditions of the 1990s, unfolded at a fast, sustained pace. Today, 130 years after its establishment, the National Bank of Romania is a solid, reliable institution, fully connected to both Romanian and European economic, social and cultural values.

The two postage stamps of this issue illustrate the front-back images of the Lei 100 banknote.

We would like to take this opportunity and express our appreciation to the National Bank of Romania management for its support in achieving this postage stamps issue. 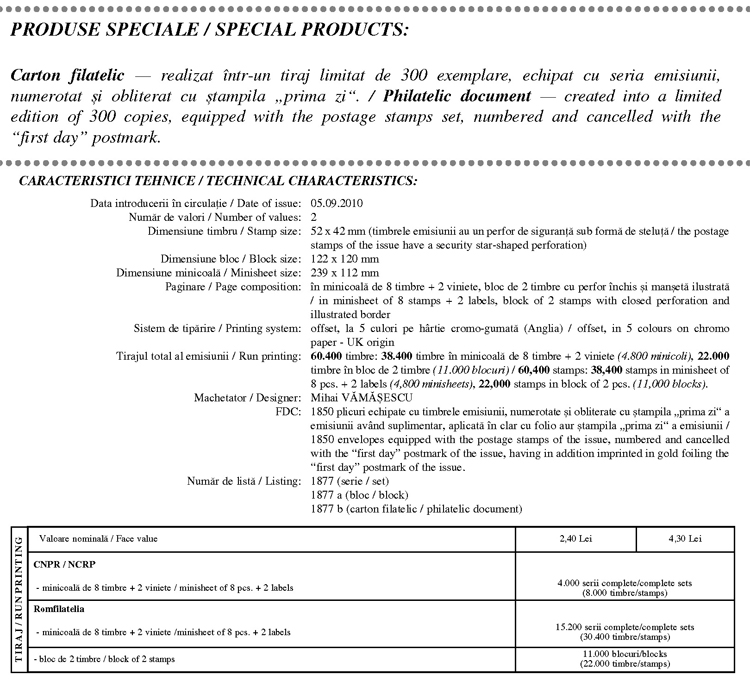