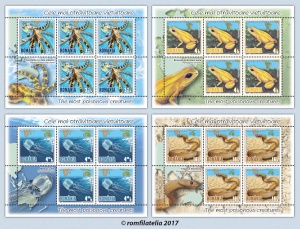 Trying to meet the desires of collectors and Fauna enthusiasts, Romfilatelia introduces into circulation the postage stamp issue “The most poisonous creatures”.

The animal kingdom, yet undiscovered in its entirety and still fascinating for the researchers, includes, both on and inside the earth, water or air, vertebrates and invertebrates, some harmless, other dangerous.

Among the most poisonous creatures of the planet we may identify: The Southern Blue-Ringed Octopus (Hapalochlaena maculosa), The Golden Poison Frog (Phyllobates terribilis), The Box Jellyfish (Chironex fleckeri), and The Desert Taipan (Oxyuranus microlepidotus).

The Southern Blue-Ringed Octopus (Hapalochlaena maculosa) is represented on the stamp with the face value of Lei 3.50. It weights on average 38 grams, and can be found in rocky cliff areas, tidal basins etc., of the southern coast of Australia.

Despite its small size, up to 20 cm, the octopus from Hapalochlaena genus is known to be one of the most venomous marine animals on the planet. Its poison, for which no antidote was found, is 1,200 times stronger than cyanide, causing motor paralysis and respiratory arrest that may lead to heart attack. Despite of its venom, the Southern Blue-Ringed Octopus is a shy creature that camouflages until it feels challenged to attack.

The stamp with the face value of Lei 4 illustrates The Golden Poison Frog (Phyllobates terribilis), a sociable batracian that lives in small groups of five or six on the Pacific Coast of Colombia. The ideal living environment for this variety of frogs is represented by tropical forests located at an altitude of 100-200 m. The species, diurnal and predominantly terrestrial, is very sensitive to any form of anthropic pressure. With a length up to 45 mm, the frogs have a dorsal color of bright yellow, orange or metallic green, depending on the area they come from.

From the studies of the specialists, it resulted that the Golden Poison Frog contains one of the most toxic substances in the animal world; only the Conus snail’ venom is more powerful at an equal dose.

Its toxins, secreted by skin glands, are taken over by the body from food, respectively from certain insects. Due to extreme toxicity, the little frog has no natural enemies, except the snakes of Erythrolamprus epinephelus species, the only species immune to little frog’s toxin.

The poison of a single little frog is enough to kill two African elephants or 10-20 people.

Known for its extremely powerful venom, The Box Jellyfish (Chironex fleckeri) is illustrated on the stamp with the face value of Lei 4.50. Hosted mainly by the coastal waters of Australia and the Indo-Pacific area, The Box Jellyfish, like other Cubozoa class’ jellyfish, has a more complex nervous system than other jellyfish and integrates multiple sensory information having eyes capable of forming images and differentiating colors, as well as other sensory organs that help to detect the vibrations that can endanger it, and maintain its balance and orientation in the water.

This jellyfish is translucent, has a diameter of about 15-35 cm, and its 60 tentacles can reach up to 3 m long. Each tentacle contains millions of cells with small venomous thorns in the form of microscopic harpoons; cells have a trigger mechanism that plants the thorns in the prey. Its sting is very painful, attacks the heart and the nervous system.

The Box Jellyfish is hunted by sea turtles, immune to the jellyfish venom.

The holder of the most powerful venom among all species of snakes that crawl on the Earth’s surface is The Desert Taipan (Oxyuranus microlepidotus) illustrated on the stamp having the face value of Lei 16, an endemic species for the arid and rocky areas of central and southern Australia. Large-sized and with a length of 1.8-2.5 m at maturity, the Desert Taipan adapts its coloring to the season, making it lighter in warm season and darker in the cold season.

According to some estimates, the taipan’s venom is about 70 times more powerful than the one of The King Cobra; he acts very fast. A single bite of it can kill about 110,000 mice, and a bitten man may die as early as 45 minutes. The venom affects the nervous system and paralyzes the respiratory system.

On the “First Day” Cover is illustrated The King Cobra (Ophiophagus hannah), the largest species among the venomous serpents, who usually reaches a length of 3-4 m, and the largest ones, nearly 6 m. We may find it in dense tropical rainforest regions, close to water, in Southeast Asia. Its name, which in Latin means “snakes eater”, is justified because it feeds only with snakes and lizards.

The King Cobra lives on the ground, is active diurnally and less frequently at night. It is monogamous, quite unusual in snakes, and oviparous, being the only snake species that builds a nest. The cobra venom contains powerful neurotoxins that, at a certain dose, are lethal to humans.

Romfilatelia expresses its gratitude to “Grigore Antipa” National Museum of Natural History from Bucharest for the documentary support given for this postage stamp issue. 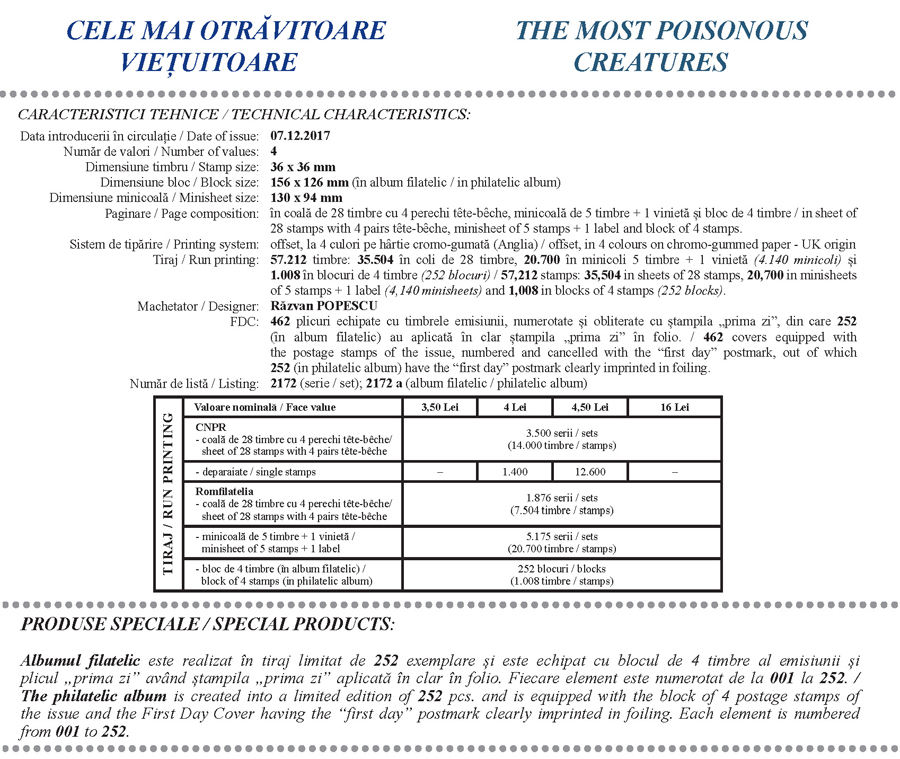