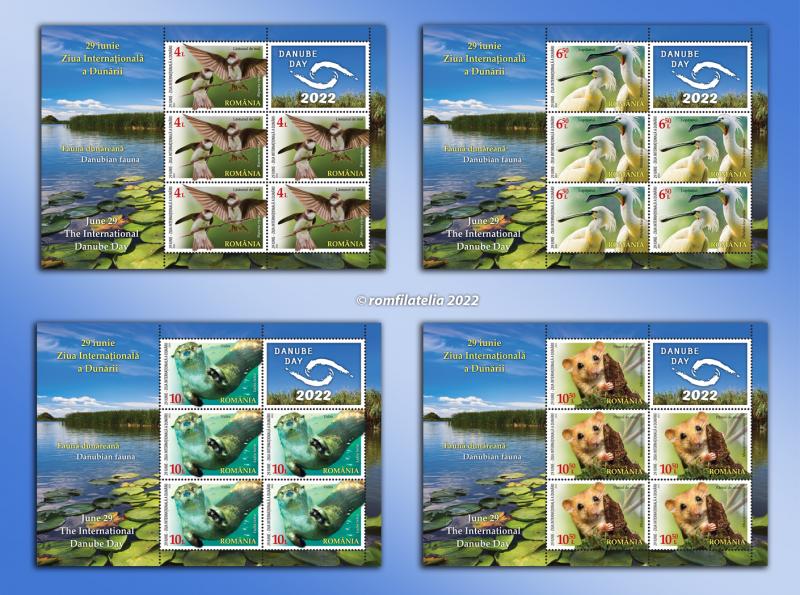 Every year on 29 June, under the auspices of the International Commission for the Protection of the Danube River (ICPDR), the International Danube Day is celebrated. This day was established to mark the signing of the Convention on Cooperation for the Protection and Sustainable Use of the Danube River at a meeting held on June 29, 1994 in Sofia (Bulgaria). Events dedicated to Danube Day are held in all the Danube states to mark their common desire to join forces in support of the protection of one of Europe’s most important rivers.

Romania holds this year the presidency of the International Commission for the Protection of the Danube River (ICPDR), and our country’s position in the Danube river basin is extremely important for the protection of biodiversity and the environment.

On the occasion of this event, Romfilatelia will introduce into circulation the International Danube Day postage stamps issue, on Wednesday, 29 June, this year.

The issue, consisting of four postage stamps, four minisheets and two First Day Covers, in which the following species of the Danube fauna are illustrated alongside beautiful landscapes with water lilies in the context of biodiversity: the sand martin, the Eurasian spoonbill, the otter and the hazel dormouse.

The sand martin (Riparia riparia), illustrated on the stamp with a face value of Lei 4, is the smallest species of swallow found in the Danube river basin. This bird nests in colonies comprising a variable number of individuals, the nests being arranged at the end of galleries dug into the vertical walls of the banks of the Danube meadow.

The Eurasian spoonbill (Platalea leucorodia), depicted on the stamp with a face value of Lei 6.50, is a large, rare, beautiful bird with a “finery” that naturally attracts human admiration. The Eurasian spoonbill is declared a natural monument and protected by law. It is a migratory bird and comes to Romania in the second half of April and leaves in September for its wintering grounds in North Africa. It is found in the Danube Delta.

The otter (Lutra lutra), which is illustrated on the stamp with a face value of Lei 10, lives in a wide variety of aquatic habitats from low-lying areas to the mountains. It is a carnivorous, semi-aquatic mammal that feeds mainly on fish. Otters are most active at night, but in quiet areas they can also be seen during the day.

The hazel dormouse (Muscardinus avellanarius) is illustrated on the stamp with a face value of Lei 10.50. Approximately the size of a house mouse, the hazel dormouse is an excellent climber and jumper. Feeding mainly in trees, it has a diversified diet consisting of flowers, larvae and bird eggs in spring and summer, seeds, berries, fruit and nuts in autumn. It is found in old-growth forests along the Danube, in mixed forests, in hazel bushes.

Romfilatelia thanks the Ministry of Environment, Waters and Forests and the “Grigore Antipa” National Museum of Natural History for the documentary support provided for the development of this postage stamps issue. 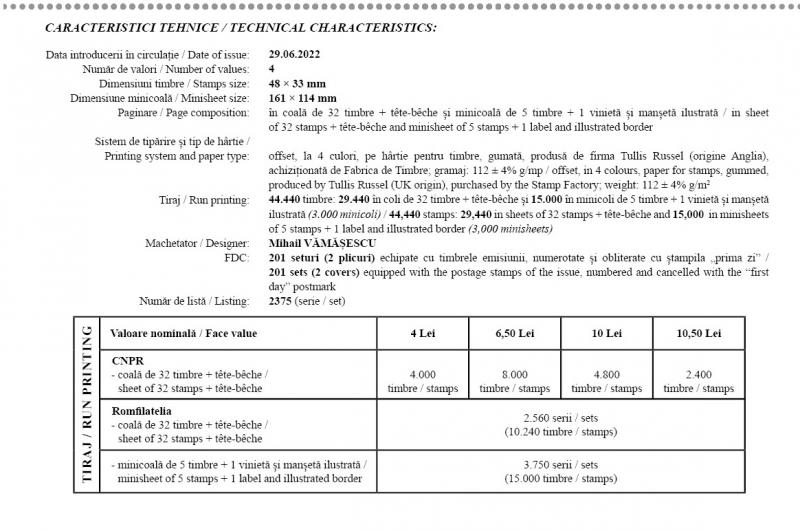