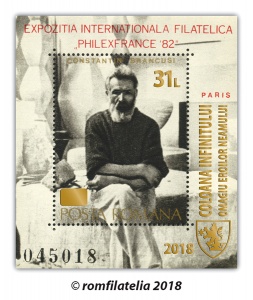 “Go! Embrace the Infinity Column with the palms of the opened hands. Then, lifting your eyes, look at it and you will thus know, indeed, the self of the sky.”

In the Centenary year celebration of the Great Union, as a sign of respect and gratitude for the sacrifice of the World War I soldiers, Romfilatelia introduces in circulation the postage stamp issue The Infinity Column, tribute to Romanian heroes.

The perforated souvenir sheet, with the face value of Lei 31, is an overprint of the postage stamp issue The International Philatelic Exhibition “Philexfrance ’82”, that illustrates Constantin Brancusi in his Paris workroom, next to a version of his work, The Infinity Column.

The postage stamps issue will be introduced into circulation on February 19, the birthday of the great artist.

Constantin Brancusi, the titan of the world art, gave Romania, out of passion for art and infinite love for his country, a unique legacy in the world – The Column of Endless Gratitude, known as The Infinity Column.

Throughout his life, the genius Brancusi experimented with all kinds of materials to finalize the shape and the dimensions of this artwork, which figures among his emblematic sculptures.

The first attempts were made in his workroom, 100 years ago, in 1918, when he completed a column with a height of 203.2 cm, created from a series of symmetrical elements set on top of each other, inspired by the pillars of the Oltenia rustic houses.

A few years later, in 1926, another version of the column, over 700 cm tall, with nine whole modules and two semi modules, was installed in Voulanais, France, in a friend’s courtyard. It was for the first time that it was displayed as an independent work of art, openly exposed to the gaze of the visitors.

At the initiative of the National League of the Romanian Women from Gorj, between 1937 and 1938, Brancusi created The Column of Infinite Gratitude, in the memory of the Romanian soldiers fallen on duty during the World War I, in the battles of Jiu Valley.

The remarkable work, later renamed The Infinity Column, is a stylization of the funerary columns specific to the South of Romania. The sculpture has three essential elements – the buried foundation, the core or the central pillar of resistance, and the column itself. The column counts 32 half rhombus (15 whole elements and 2 base and top semi-elements) pieces of cast iron and of steel similar to hourglasses, through which time did not seem to flow, but to tend towards infinity. The monument, with a height of 29.35 m and a weight of 29,137 kg, was cast at the Central Workshops in Petrosani, in September 1937. Brancusi requested for it to be covered in brass by pulverization, a technology developed in Switzerland and used for the first time during that time in Romania.

The column is part of the Calea Eroilor (Heroes’Path) Monumental Assembly from Targu-Jiu, inaugurated 80 years ago, on October 27, 1938. The ensemble stretches over 1.5 km, on an East-West axis, and is composed of The Table of Silence, The Alley of Chairs, The Gate of Kiss and The Infinity Column, running on its way into the Saints Peter and Paul Church.

In April 2007, in Targu-Jiu was unveiled the plaque which attests the inclusion of the Monumental Assembly Calea Eroilor into the European cultural patrimony.

The Infinity Column passes on over centuries the legacy of the sacrifice of our national heroes. 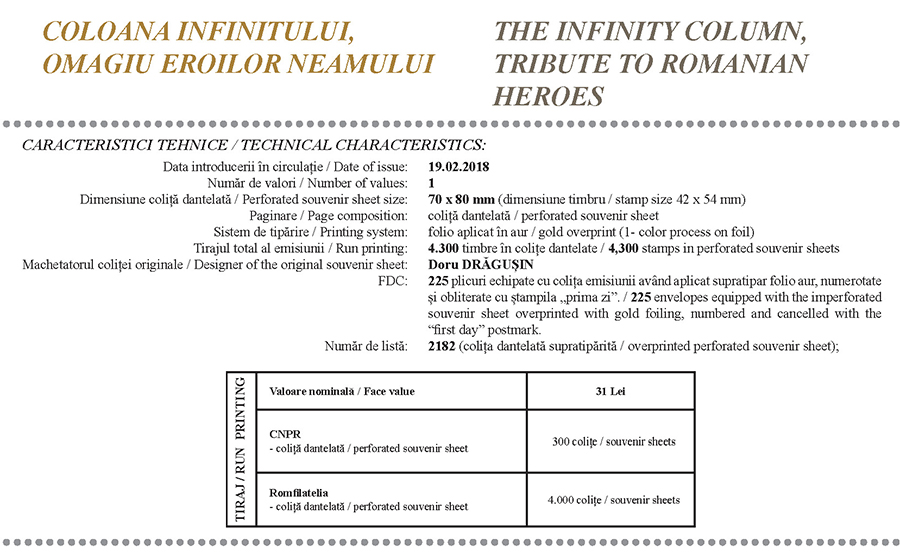