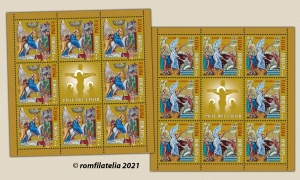 Around the most important event of Christianity, Romfilatelia introduces into circulation, on Friday, April 2nd , this year, the postage stamps issue Holy Easter 2021, which commemorates the turning points from the life of Jesus Christ – The Entry into Jerusalem, The Last Supper and The Resurrection.

The two postage stamps of the issue, having the same face value of Lei 2, illustrate the icons The Entry of the Lord Jesus Christ into Jerusalem and The Resurrection.

On the stamp of the perforated souvenir sheet, with the face value of Lei 31.50, is depicted the icon The Last Supper.

The Orthodox Church celebrates the event of the Lord’s Entry into Jerusalem one Sunday before the Feast of the Resurrection of the Lord Jesus Christ, that is, on Palm Sunday.

According to the Byzantine Erminia, also described by the theologian Constantin Cavarnos, in his volume entitled Guide to Byzantine Iconography, the representation of the Lord’s Entry into Jerusalem depicts the Saviour Christ entering the city of Jerusalem on a donkey’s colt. The city of Jerusalem is illustrated on the right of the scene, in the form of a fortress with open doors. A group of men, women, and children came out of the city gate, cutting branches and laying them in the way of the Lord Jesus Christ, shouting “Hosanna to the Son of David!” They represent the people who lived in Jerusalem and went out to meet the Lord Jesus Christ, about whose miracle of the resurrection of Lazarus they had heard and were amazed. The Lord Jesus Christ blesses humbly with his right hand and holds a phylactery in his left hand. The Byzantine representation of this icon depicts Christ the Lord seated with both feet on the same side of the donkey, facing the viewer of the icon, as opposed to Western religious paintings in which Christ is usually depicted riding with his feet on either side of the donkey.

The Entry of Christ into Jerusalem is a moment that illustrates the humility of the Saviour, Who is acclaimed by the multitude of people, who, in a short time, would cry out that He would be crucified.

In the Orthodox Church, the Last Supper is celebrated during the Holy Passion Week of our Lord Jesus Christ, on the Holy and Great Thursday.

At the Last Supper, the Lord Jesus Christ instituted the Sacrament of the Holy Eucharist. This Holy Sacrament, which is also called Holy Communion or Viaticum, is the centre of the life of the Church. Through the Last Supper, Christ shows that the gifts of creation, represented by bread and wine, are gifts of His love for people, and when He sanctifies these gifts, transfiguring them through His very presence, He gives us eternal life: “Whoever eats My flesh and drinks My blood has eternal life, and I will raise them up at the last day. For My flesh is real food and my blood is real drink.” (John 6:54-55).

The icon of the Last Supper is never absent from the iconographic programme of the Orthodox churches, being painted in the nave, on the iconostasis or even in the altar.

This icon depicts the Lord Jesus Christ having dinner with His disciples before His Holy Passion. On the table are plates, bread, jugs and wine. Byzantine iconography depicts the table of the Last Supper as semicircular. Christ is placed in the middle of the semicircle of the table, thus being the centre of the icon. He is also represented a little larger than His disciples. Christ blesses with his right hand; the disciples are seated on either side of Christ; John is seated on the left side, bent on the chest of Jesus (according to John 13:23-25), and Peter is on the right side of Jesus, since he was the eldest of the disciples. Also on the right is depicted Judas, who extends his hand to the dish and looks at Jesus, thus showing his intentions as a traitor. The disciples are represented without halos, and the expression on their faces shows turmoil and sadness because Christ tells them that one will sell Him and He will be condemned to death. At the same time, the faces of the disciples are all oriented frontally, towards the viewer of the icon.

The resurrection of the Lord Jesus Christ from the dead is central to His earthly activity and the history of human salvation. The Holy Evangelists recount in detail this shocking and mysterious event, full of divine glory, by which the Saviour Jesus Christ restores man and all creation (Matthew 28; Mark 16; Luke 24; John 20).

The common icon, especially in Byzantine painting, of the Lord’s Resurrection is known as “Anastasis” (the Greek term for “Resurrection”), which represents Jesus Christ as Conqueror over hell and death. This icon is also called the icon of the Lord’s Descent into Hell.

The Lord Jesus Christ is represented in hell as the Master of life and death, the Conqueror of hell, the Redeemer of those here. Christ the Saviour looks tenderly at Adam’s face, who begs for forgiveness. To Adam’s right side is Eve, who is also on her knees, with her hands raised in prayer to Christ the Saviour. The clothes in which Eve is represented are reminiscent of the clothing of the Mother of God, thus suggesting that Jesus Christ, the Incarnate Son of God, the New Adam, was born as a man in the world through the new Eve, the Virgin Mary. To the left of the Lord Jesus Christ are painted King Solomon and King David, dressed in royal robes, wearing crowns, ancestors and prophets of the Messiah. They recognize Christ the Lord – the Messiah, showing to all the One of whom they had prophesied and whose coming they had announced. Behind Solomon we can see Saint John the Baptist, the Forerunner who prepared the way of the Lord.

His Beatitude Father Daniel, Patriarch of Romania, teaches that the Resurrection of Christ is the beginning of the resurrection of all people, it is the Good News in its fullness and uniqueness, it is a guarantee of our resurrection. The Saviour Christ Himself said, “I am the resurrection and the life. The one who believes in me will live, even though they die; and whoever lives by believing in me will never die.” (John 11:25-26).

Romfilatelia thanks His Beatitude Father Daniel, the Patriarch of the Romanian Orthodox Church, for the support granted in the accomplishment of this postage stamps issue. 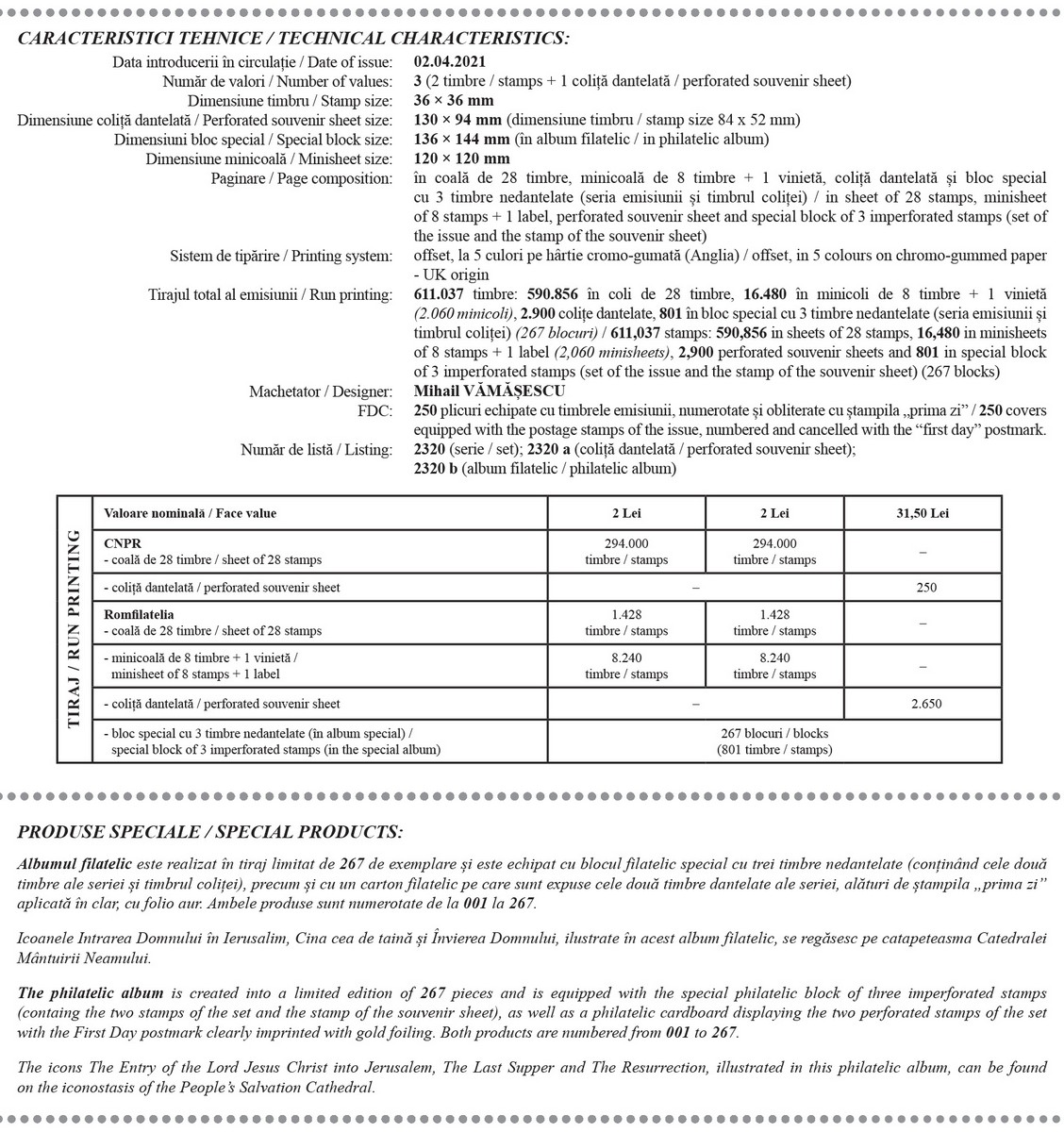