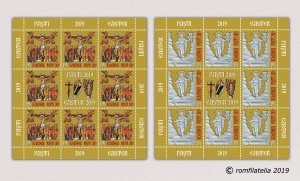 Easter, the Christian holiday that calls on people to take the Holy Light, brings the unique joy of the Resurrection, but also rituals and religious traditions. Among which that of the salute known by even the youngest ones: Christ is risen! Truly He is risen!

On the last night of their bondage in Egypt, the Jews followed the command of the Lord, sacrificing a lamb that they roasted and took with them, alongside the unleavened bread (wafer) while they left the land of the Pharaohs.

Transformed into an annual celebration under the name of Pesah (from Hebrew: to skip over, to spare, to overcome), this was also celebrated by Christ.

“Every year Jesus’ parents went to Jerusalem for the Festival of the Passover. When he was twelve years old, they went up to the festival, according to the custom.” (Luke 2:41, 42)

“When it was almost time for the Jewish, Passover, Jesus went up to Jerusalem.” (John 2:13)

The last supper that Jesus ate with His disciples at Jerusalem shortly before He was crucified, was a Passover meal.

“On the first day of the Festival of Unleavened Bread, the disciples came to Jesus and asked, ‘Where do you want us to make preparations for you to eat the Passover?’ He replied: ‘Go into the city to a certain man and tell him, ‘The Teacher says: My appointed time is near. I am going to celebrate the Passover with my disciples at your house.’ So the disciples did as Jesus had directed them and prepared the Passover.” (Matthew 26:17-19)

The Christian Easter is the celebration of the Lord’s Resurrection, the third day after the descent in the grave of Messiah’s body, as we pray in our Credo: “…  and that he rose again the third day according to the Scriptures… ”

The third day was Sunday, so Christian Easter is always celebrated on Sunday. By the glorious victory of Jesus Christ on death, we celebrate Easter and the Resurrection of the Lord, but also the consequence of the Resurrection, that is, our passing from death to life.

Regarding the date in the calendar for the celebration of the Christian Easter, the Ecumenical Synod of Nicaea in 325 established that all the Christian world should celebrate Easter on the first Sunday after the full moon of the vernal equinox, preceding the Jewish Passover. The practice of our Church establishes that Easter cannot be celebrated earlier than April 3rd and mandatory on a Sunday.

The postage stamps reproduce the images that are found in the Miscellany works of church chants, having as authors Mitrofan, the Patriarch of Constantinople (306-314) and St. Gregory of Sinai (1255-1346), respectively The Bishop’s Missal of Stephen, the Metropolitan of Wallachia (17th century), from the patrimony of Library of the Romanian Academy.

The work is a brilliant example for bringing Western elements into miniature art. Taking on foreign elements what corresponded to the Romanian plastic language, in the spirit of his own artistic tradition and vision, the copyist made a masterpiece of the Romanian miniatures.

The postage stamps reproduce the scenes of the Crucifixion and respectively, the Resurrection of Jesus Christ, imagined in drawings made by the writers and illustrators of the pages of the mentioned works.

The perforated souvenir sheet of the issue entirely reproduces the image of the page bearing the number 44 in the Bishop’s Missal, being illustrated the Crucifixion of Jesus Christ’s scene.

On the First Day Cover of the issue is represented the ornamental letter The Last Supper, and in the lower register are illustrated: The Crucifixion Cross, The Myrrh-bearing women at the empty tomb, The Resurrection, The Holy Trinity, the second coming of Jesus, the elements being taken over from the work the Bishop’s Missal of Stephen, the Metropolitan Bishop of Wallachia (17th century).

Romfilatelia thanks to the Library of the Romanian Academy for the documentary and photographic support granted to the achievement of this postage stamps issue. 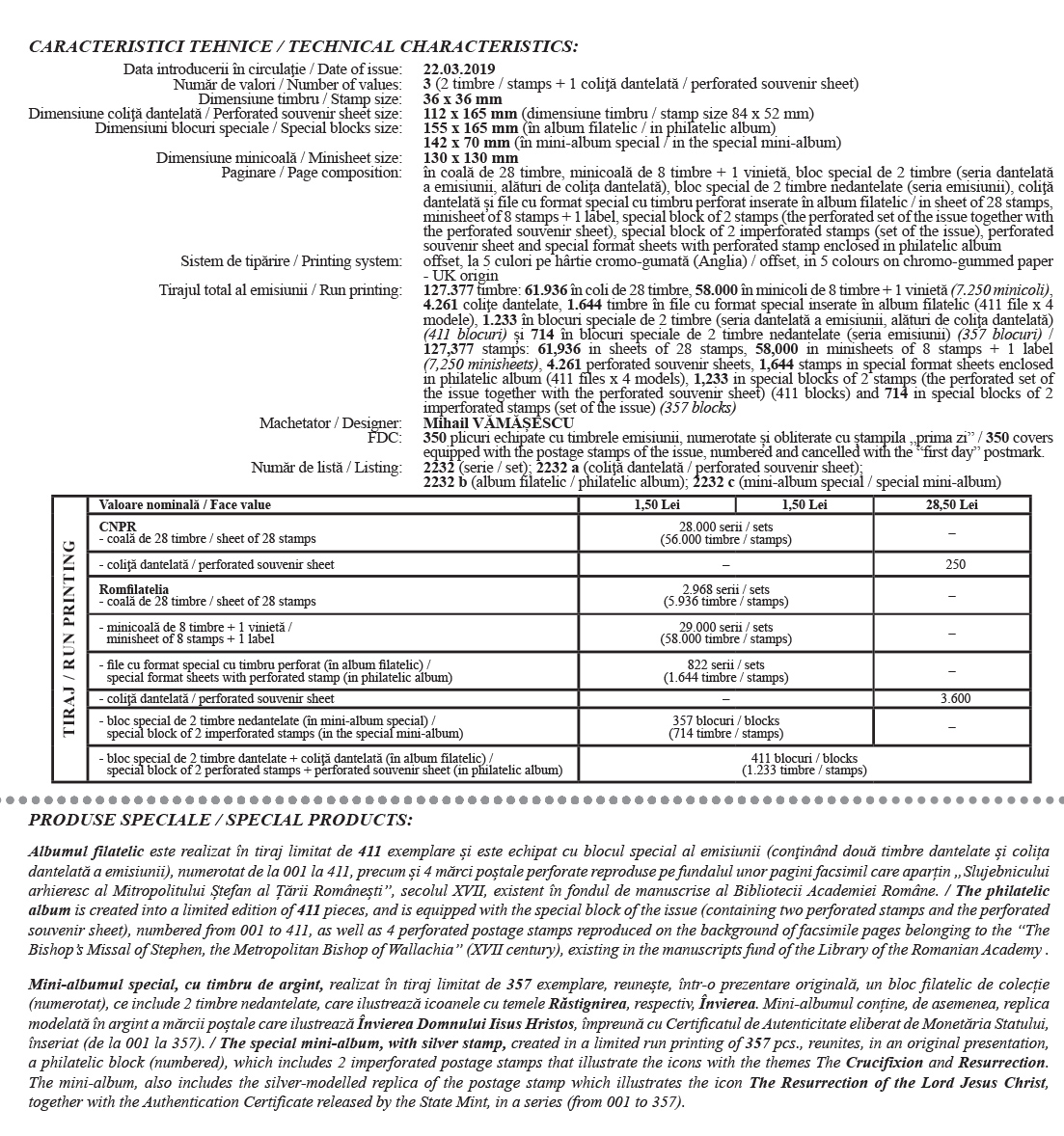