On the Eve of the most important event of Christianity, Romfilatelia introduces into circulation the postage stamp issue The Holy Easter 2018, which commemorates the turning points from the life of Jesus Christ – the Entrance to Jerusalem, the Crucifixion and the Resurrection.

Considered the holiday of holidays, the Resurrection brought humanity the hope of salvation and of eternal life, through the sacrifice of Lord Jesus Christ.

In 2018, the Year of the Great Union Centenary, proclaimed “Solemn Year of Unity of Faith and Nation” and “Commemorative Year of the 1918 Great Union Founders” by the Holy Synod of the Romanian Orthodox Church, Romfilatelia travels to the Alba Iulia fortress, symbol of the Romanian unity due to the first unification accomplished by Michael the Brave and, subsequently, the venue of the Great Union. The historic moment of the Romania’s Unification was marked by the erection of the Coronation Cathedral, with the patronage of the Archangel Saints Michael and Gabriel, whose cornerstone was laid on March 28, 1921, the second Easter Day. Built with the support of the Royal House of Romania, the cathedral is the place where the coronation of the sovereigns of Unity, King Ferdinand I and Queen Marie, took place.

In 1998 it was elevated to the rank of Archbishopric Cathedral. Included on the list of historical monuments of Romania, the Cathedral remains, at the same time, a symbol and a monument of our national unity, as well as a sacred place of pilgrimage.

The two postage stamps of the issue, both with the face value of Lei 1.30, illustrate icons from the patrimony of the Alba Iulia Cathedral – The Entrance to Jerusalem and The Resurrection of Jesus Christ.

The Entrance of Lord Jesus Christ in Jerusalem, known as Palm Sunday, marks the beginning of the last week of His earthy life. From this day the Holy Week starts, and all churches officiate, every evening, masses through which believers are called to accompany Christ on the Via Dolorosa, until His death and His Resurrection.

Christ entered Jerusalem glorious, yet still sad, knowing that He will pay with beatings, flagellations, with the laying on the Cross and with death for the ovations received. The crowd that acclaimed Him on Palm Sunday – witness of the miracles accomplished by Jesus – is the same which, instigated by the Pharisees frightened by His popularity, would abandon Him and would shout, full of hatred, “Crucify Him, crucify Him!” (John 19:15).

The act of Resurrection is the confession of God’s boundless power, a proof of the people’s resurrection, this being a basic truth of the Christian faith. Christians find comfort in the fact that God became human, died for people’s sins and was resurrected on the third day.

The death sentence by crucifixion of the world’s Savior, Jesus Christ, during the Old Testament Easter, represents for Christians a new beginning: the commemoration of Christ’s sacrifice followed by the great celebration of the Resurrection.

The stamp of the perforated souvenir sheet, with the face value of Lei 12, reproduces the icon The Crucifixion of Lord Jesus Christ, from the iconostasis of the Alba Iulia Cathedral. Through the crucifixion, the most important moment from Jesus Christ’s messianic mission, God’s Son receives the earthly death, the supreme sacrifice, through which He takes upon himself the sins of the world, reconciling man and Creator. The Icon of the Crucifixion signifies God’s infinite kindness and love towards humanity, and He is not afraid of any suffering.

The Romfilatelia team wishes you Enlightened Holidays, together with your dear ones!

Romfilatelia thanks His Beatitude Daniel, the Patriarch of the Romanian Orthodox Church and Priest Irineu, Archbishop of Alba Iulia, for the documentary and photographic support provided for the achievement of this postage stamp issue. 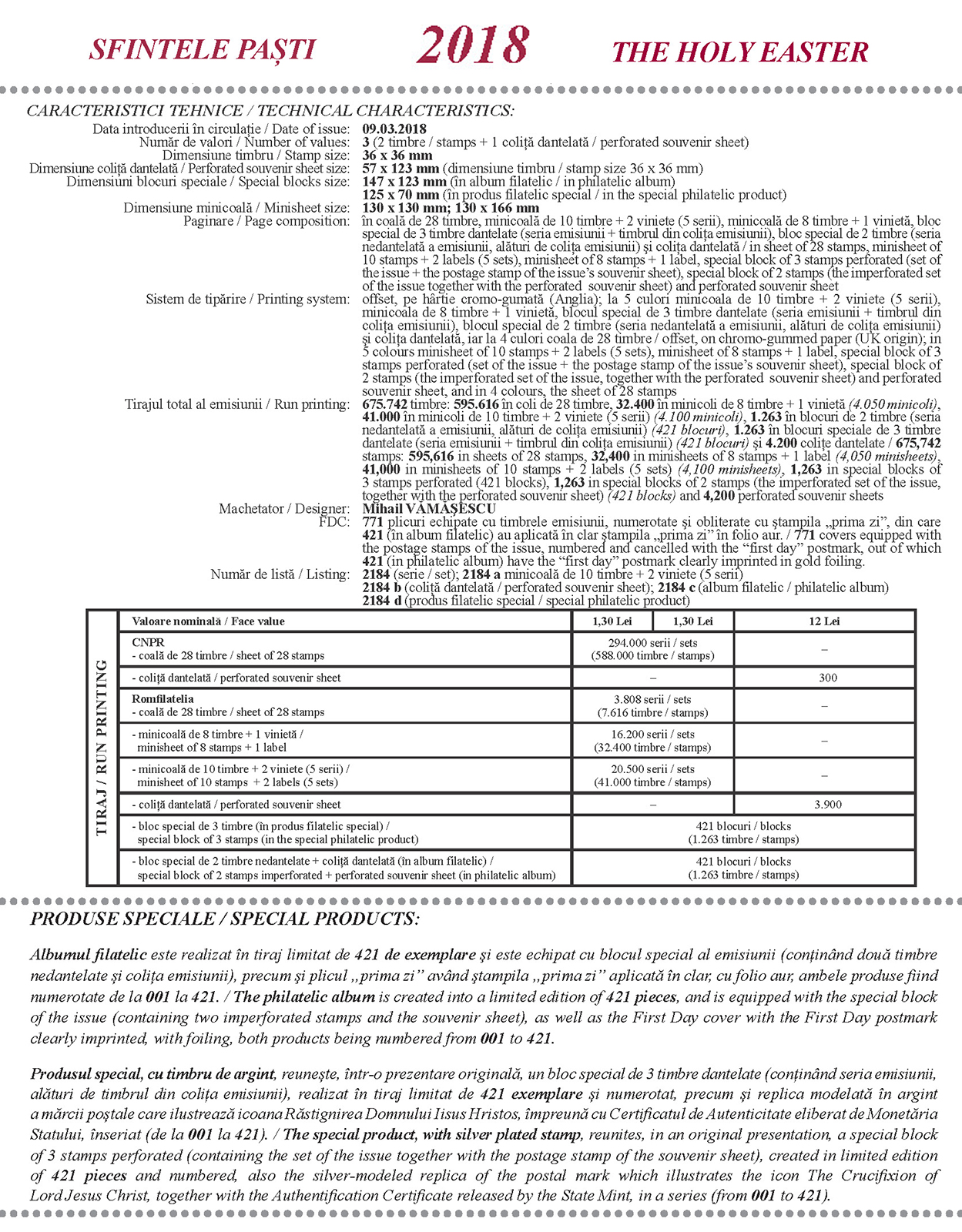