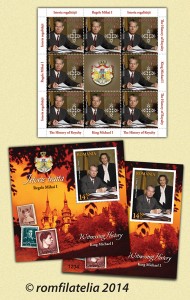 “The Royal Crown is not a symbol of the past, but a unique representation of our independence, sovereignty and unity. The Crown is a reflection of the State and the Nation. The Crown has consolidated Romania through loyalty, courage, respect, generosity and modesty.” King Michael I

On 25th October 2014, the longest living statesman in Romania´s entire history, His Majesty King Michael I, turns 93. Born on 25th October 1921 at the Foisor Castle from Sinaia, King Michael I has had a tumultuous life, marked by two reigns (1927-1930 and 1940-1947), the first of them under a Regency and the second under the sign of the Second World War. On 23rd August 1944, 70 years ago, King Michael took the decision to turn against the Axis powers, in order to save the country’s existence, by joining Romania to the Allied camp. The instauration of the communist power led to his forced abdication on 30th December 1947, which marked the beginning of an over 40-year long Exile.

The stamp with the face value of lei 4.70 depicts His Majesty The King in the anniversary year 2008, sitting at his desk from Elisabeta Palace, currently his official residence. It is in the same office where King Michael worked for three years (1944-1947), after the bombing of the building known as „The New House”, located behind the Royal Palace in Calea Victoriei. The graphical mark represents the Cipher of King Michael I, adopted in September 1940, and formed by the combination in a cross of the letter M, crowned. It is still used today on Royal correspondence and documents, and throughout time it has been used for the Royal Guards Regiment and on the combat flags of military unities.

The souvenir sheet with the face value of lei 14.50 depicts Their Majesties King Michael I and Queen Anne of Romania, in the same office at Elisabeta Palace. Born Princess of Bourbon and Parme, on 18th September 1923, Queen Anne met King Michael in 1947, at the wedding of Queen Elisabeth II of Great Britain, in London. On 10th June 1948, the royal couple got married in Athens, at the Tatoi Royal Palace, where the Throne Hall had been converted for a day into an Orthodox Chapel. Together they have five daughters, the eldest of them, Her Royal Highness Crown Princess Margareta of Romania being appointed Custodian of the Crown of Romania. Queen Anne has been awarded the Croix de Guerre for her acts of bravery during the Second World War, when she served as an ambulance driver in the North of Africa and then as translator for some of the great commanders in Western Europe.

„This is what we have done our whole life: shoulder to shoulder, we have helped one another and we were accomplices, without just looking at each other, but rather both of us looking as a single being towards the meandering road in front of us.” – Queen Anne speaking about her life with King Michael.

Romfilatelia thanks the Household of His Majesty the King and Mr. Marius Baragan for the documentary and photographic support granted in the accomplishment of this postage stamp issue. 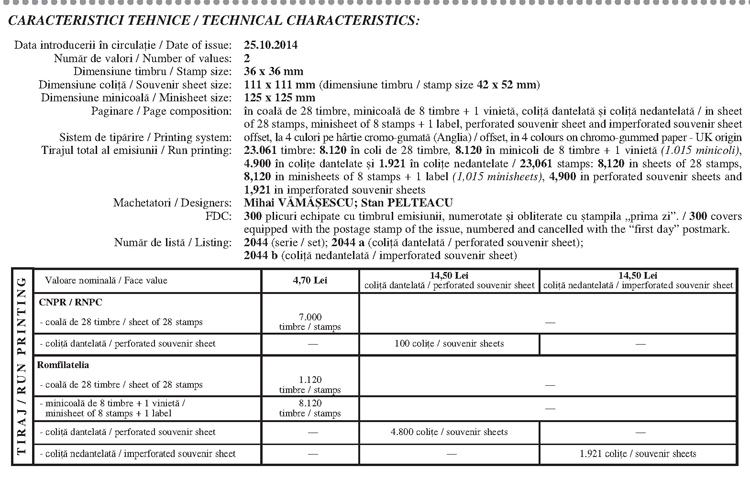