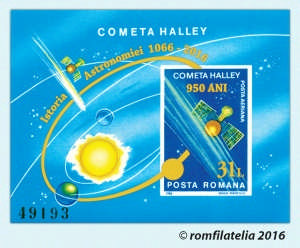 The history of astronomy is the history of the science that studies celestial bodies, from simple observation to theories about the universe. Astronomy includes the study of planets and their satellites, comets, meteors, stars, black holes, galaxies and solar systems.

This postage stamp issue represents the overprint of the souvenir sheet of the issue The Return of Halley’s Comet, in 1986.

The curiosity of ancient peoples over astronomical phenomena made them study the sky and understand the formation of day and night, sun and moon’s role in the measurement of time and the seasons. Ancient peoples observed that the celestial objects behave in a regular pattern, helping to measure time, forming days, weeks, months and years.

We have some of the oldest testimonies of the importance that people gave the sky from Sumer, the British Isles, Egypt or Maya. These populations have shown a major interest in the creation of astronomical sanctuaries where they could track and measure the rising of stars, like Sirius, or planets, like Venus and Mercury.

Halley’s Comet is the most famous of the periodic comets, and could be seen about every 75 – 76 years. The comet received the English astronomer’s name, Edmond Halley. By applying Newton’s gravitational theory and taking into account the gravitational effects of Jupiter and Saturn, he managed to establish the approximate date of the next reversion of the comet.

The firsts sighting of Halley’s Comet could not be calculated, but the first mentions of it were made by the Chinese in 611 BC. It was observed in 467 BC and 240 BC.

Since 240 BC until now, the comet was observed about 30 times, its next appearance being estimated for 2061. The gravitational force of planets alters the orbital period from revolution to revolution. Non-gravitational effects, such as explosive reactive gases that heat up when the celestial body passes near the Sun, play an important role in changing its orbit.

Halley belongs to the category of short period comets. Comets of this type have an average inclination relative to the ellipse of only ten degrees and an orbital period of just 6.5 years, making Halley’s Comet’s orbit an atypical one. This suggests that the Halley Comet was originally a long period comet, whose orbit was perturbed by the gravitational pull of the giant planets, the periodical closeness to the Sun, and sent into the inner solar system.

One of the most famous passes, recorded on the no less famous Bayeux Tapestry, was in 1066, when it stunned William the Conqueror’s army; since then, no less than 950 years have passed.

The Bayeux Tapestry is a embroidered canvas, about 70 meters long, which describes events leading up to the Norman conquest of England by William, Duke of Normandy (later king of England) and his struggles with Harold II of England, culminating in the Battle of Hastings. The tapestry is made up of 50 scenes with Latin titles, embroidered with colored wool yarn on canvas. Halley’s Comet, which appeared in the skies of England in 1066, is pictured on the 32nd picture of the Bayeux Tapestry, regarded by King Harold II, before the Battle of Hastings.

An interesting story about the Halley Comet is linked to the fate of American writer Mark Twain, who was born in 1835, two weeks after the comet’s passing. In 1909, Mark Twain wrote in his autobiography that he came along with the comet and would go with it. And he left in April 1910.

No less famous was its last crossing, in 1986, becoming the first comet over-flown by a space mission, namely Giotto and Vega.

Romfilatelia thanks the Astronomical Institute of Romanian Academy for the documentary support granted in the creation of this postage stamp issue. 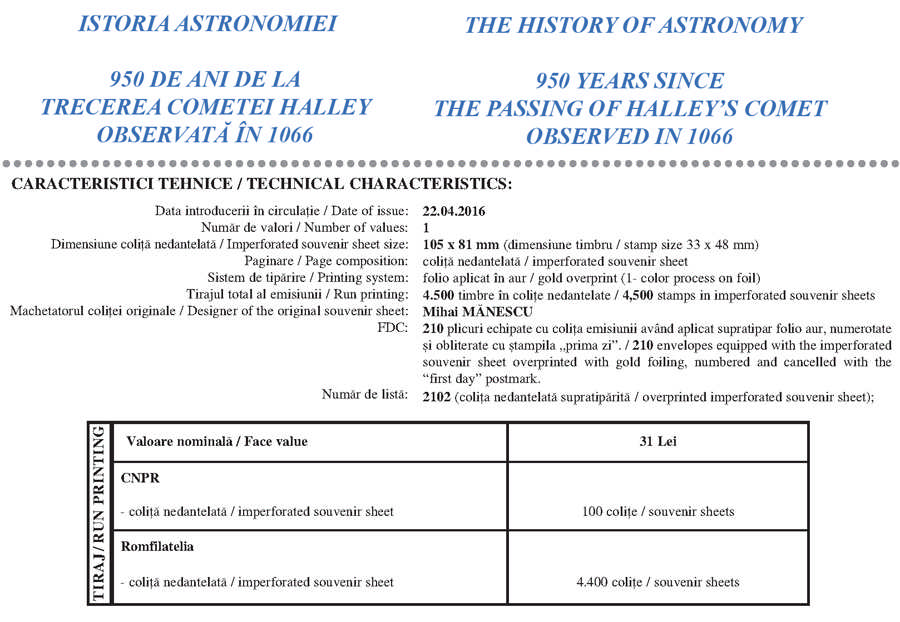