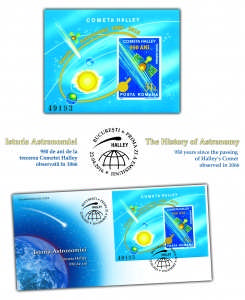 The history of astronomy is the history of the science that studies celestial bodies, from simple observation to theories about the universe. Astronomy includes the study of planets and their satellites, comets, meteors, stars, black holes, galaxies and solar systems.

Halley’s Comet is the most famous of the periodic comets, and can be seen about every 75-76 years. It received the English astronomer’s name, Edmond Halley, and belongs to the category of short period comets.

An interesting story about the Halley’s Comet is linked to the American writer Mark Twain, who was born in 1835, two weeks after the comet’s passing. In his autobiography he wrote that he came along with the comet and would go with it, its prediction actually becoming true as he passed away in april 1910, date which registered a new passing of the comet.

The latest philatelic project is dedicated to this periodic comet and represents the overprint of the souvenir sheet of the issue The Return of Halley’s Comet, in 1986.

Bearing the title The History of Astronomy, 950 years since the passing of Halley’s Comet observed in 1066, the issue consists of a first day cover and an overprinted imperforated souvenir sheet, showing a stylized illustration of Halley’s Comet’s journey through our galaxy.

The issue’s leaflet offers additional information about the comet’s characteristics, details about its first mentions and its most famous apparitions, as well as a short introduction in the beautiful field of astronomy.

The postage stamp issue can be purchased starting with Friday, April 22nd, 2016, in Romfilatelia’s stores in Bucharest, Bacau, Brasov, Cluj-Napoca, Iasi and Timisoara.

Romfilatelia thanks the Astronomical Institute of Romanian Academy for the documentary support granted in the creation of this postage stamp issue.

A stamp ennobles the communication by itself; it shares emotions, compresses distances and creates connections; it gathers on its miniature surface “huge” stories about human and material values,
including them successfully within the Romanian heritage; A stamp is transformed in time, redefining its role according to the society’s current facts: from an advocate of noble causes and a friend of influential Romanian personalities to a leading messenger of the most important events, or simply, a genuine ambassador of our country and the Romanian people. Do not forget to search for and discover the excitement of a world gathered on the Romanian stamps!