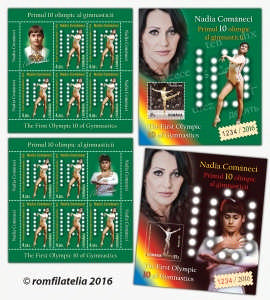 “Hard work made everything easy! That’s my secret!”
Nadia Comaneci

Every nation has its great values, and Romania has an impressive number of personalities of which it is proud, and whose achievements have crossed the borders of the country. One of these figures is the world’s largest gymnast Nadia Comaneci.
Nadia Comaneci’s achievements have revolutionized world gymnastics and thus she entered history as the best Romanian athlete of all time that was submitted to the International Gymnastics Hall of Fame in 1993.
On July 18th, 1976, a 14 year old gymnast from Romania surprised the sports world with an unrivaled performance: “absolute” 10 at the Summer Olympics in Montreal. The electronic display was not programmed to show grade 10, because there were only three spaces to show the grade, so that the screen showed grade 1.00. Nadia Comaneci got, on this edition of the Olympic Games, the perfect score, winning three gold medals in the individual all-around, balance beam and uneven bars, one silver medal with the team and one bronze for the floor routine.
“Nobody knows when exactly they enter history. There is no specialty manual in the field, to tell you how to deal with the moment. As I was the last to compete in the uneven bars, I immediately started to warm up for the beam. While I was doing warm ups for the beam, the electronic board displayed the grade. A 1.00. I kept warming up, ignoring what had happened, focused on the next exercise. Béla came near me and I asked him: Is it really a 10, Sir? His smile widened from ear to ear and he said yes.”, Nadia recalls with nostalgia.

Since then, the gymnast from Onesti made history as the first athlete with a perfect exercise. If the beam, called “the bridge of sighs” is an aparatus that most gymnasts “run away from”, but for Nadia, in Montreal, it meant another step towards the Olympic title and another perfect score. Two of the elements currently bear her name, the “Comaneci Dismount” and the “Comaneci Jump”.
Nadia Elena Comaneci was born on November 12th, 1961, in Onesti, Bacau County and was named after “Nadezhda” “Hope”, the heroine of a film.
Nadia debuted nationally in 1970, as a member of her hometown team. The same year she began training with Béla Károlyi and his wife Márta Károlyi. At age 13, Nadia Comaneci’s first major success was winning three gold medals and one silver at the European Championships in 1975 in Skien, Norway.
“I didn’t have someone to follow, my parents were not athletes, so I could not follow in their footsteps. My dream was to discover myself, to find out what I could do, to win my own trust and be better than the others”, she said earnestly.
Until 1981, when she retired from competitive activities, Nadia Comaneci won five gold medals, three silver and one bronze at the 1976 Olympic Games and the Olympic Games of 1980 and 11 awards gold, 4 silver and one bronze at global and European competitions.
Celebrating this year the 40th anniversary of the first Olympic 10 in gymnastics, Romfilatelia introduces into circulation a special postage stamp issue, making sport lovers and not only, relive the excitement of that day of July 18th, 1976, when a child changed a world, Nadia Comaneci.
The stamp and the two souvenir sheets of the issue suggestively illustrate the moment of July 18th, 1976, when Olympic gymnastics attained perfection through the performance of a 14 year old child, who dominated by her impeccable technique. The illustrated sleeve of the souvenir sheet features in the background the word ten in the six official UN languages – English, French, Spanish, Russian, Arabic and Chinese. The image of the 14 year old child is brought into the present by the current image of the champion. The two souvenir sheets bring philatelists the gift of two premieres – a symbolical run printing of 2016 pcs., suggesting the marking in 2016 of 40 years of perfection in gymnastics, as well as two types of special paper with security features that the two souvenir sheets are printed on.

Romfilatelia thanks Mrs. Nadia Comaneci, the Nadia Comaneci Foundation in Romania and the “Carol I” Central University Library for the images (photos from the champion’s archive) and the documentary support granted in the creation of this postage stamp issue. 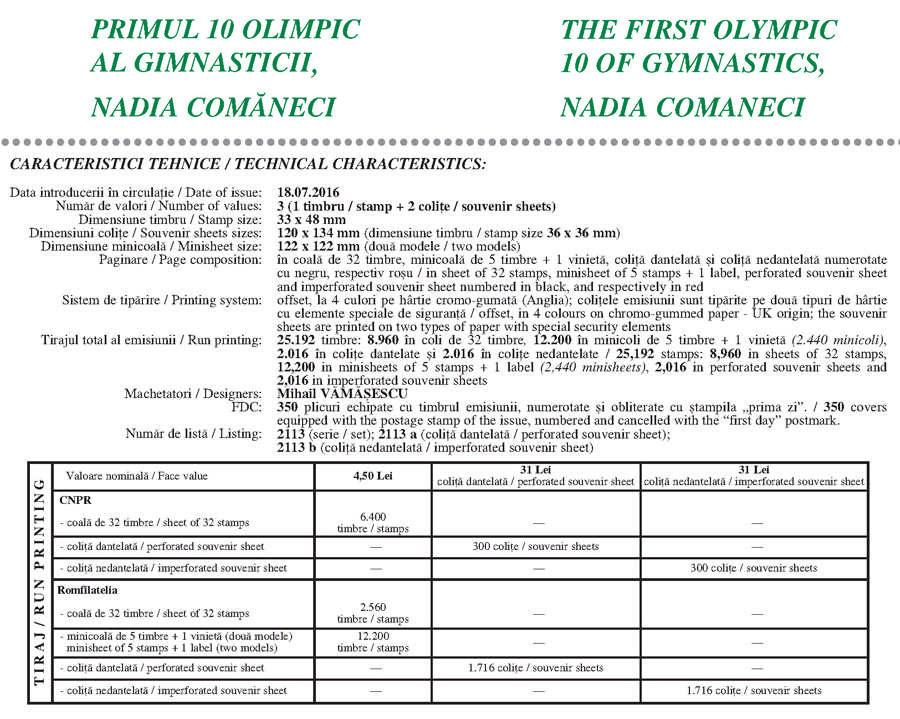