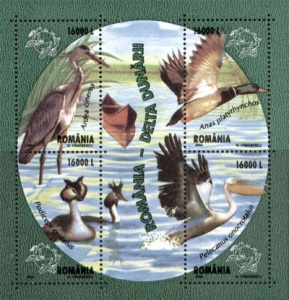 The Romanian Post has initiated a special postage stamp programme consisting of a set of themes of great interest for philatelists. This programme is dedicated to the 23rd Universal Postal Union Congress which our country has the honour to host in Bucharest between the 15th of September and the 5th of October 2004. The first theme of this programme is the Danube Delta, our natural treasure.

The Danube, the second longest European river, rises in the Black Forest Mountains of Germany and flows for some 2,850 km to its mouths on the Black Sea where it created a delta. Along its course it passes through nine countries: Germany, Austria, Slovakia, Hungary, Croatia, Serbia, Bulgaria, Romania and Ukraine.

The Danube Delta is a comparatively young formation and covers an area of some 4,340 square km on our territory. About 6,500 years ago, the delta site was a shallow cove of the Black Sea coast, but it was gradually filled by river-borne silt. The delta continues to grow seaward even now. This natural reservation of international interest and major touristic attraction is a paradise for a multitude of flora and fauna species.

The stamps have the same denomination of 16,000 lei (ROL) and each bears the logo of UPU (Universal Postal Union). The unitary composition of the bloc depicts a landscape of the delta with four characteristic bird species on the stamps.

Anas platyrhynchos, the wild duck of the Northern Hemisphere is the ancestor of most domestic ducks and is probably the most recognized waterfowl in the world. The species shows strong sexual difference in plumage, but both sexes have the beautiful iridescent blue feathers on the wings.

Ardea cinerea, the grey or common heron, is widespread throughout much of Europe. The big size, pale grey plumage and distinctive shape distinguish it from all other birds. They have broad wings, long legs and prolonged straight sharp-pointed bills.

Pelecanus onocrotalus, the European white pelican, is among the largest of living birds. Their plumage is white except for some black feathers on the wings. Pelicans are characterized by their long bills and large, elastic throat pouches. They live, breed and migrate in large colonies.

Podiceps cristatus, the great crested grebe, is an excellent swimmer and diver and has brown plumage and a superb red collar. It comes to our country in the summer to the Danube Delta and to the lakes and rivers surrounded by reed.