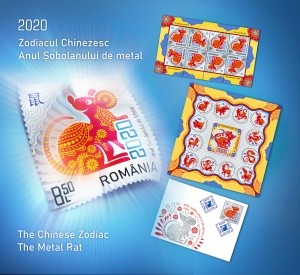 Romfilatelia introduces into circulation, as a premiere, on Thursday, January 23rd, current year, the postage stamps issue The Chinese Zodiac. Year of the metal rat, a philatelic theme beloved by collectors around the world.

The rat, illustrated on the postage stamp with the face value of Lei 8.50, is the first sign in the 12-year cycle of the Chinese zodiac. After this lunar year, the next one is the Year of the Ox.

Horoscopes have been developed in close connection with animal signs to predict the traits and destiny of the personality. It is known that each animal has certain characteristics that a person born under that sign would demonstrate. The year in which a person is born determines the zodiac sign. For example, a person’s animal sign is a rat if it was born in one of the rat years.

Unlike the Western linear calendar, the Chinese calendar has a cyclic dating method that is repeated every 60 years. The calendar is based on two interacting cycles – the Chinese zodiac, which is divided into 12 parts and five elements.

Much of Chinese philosophy is elaborated in close connection with five elements and the belief that they interact with natural phenomena. The five elements include metal, water, wood, fire and earth have been in Chinese culture for thousands of years and define the Chinese Zodiac. Each element has different features. The characteristics of the five elements are attributed to the 12 animal signs, creating 60 possible characteristic combinations. The concept of Yin and Yang also affects the Chinese Zodiac, allocating forces opposite each animal sign – odd years are Yin years and even years are Yang years. The yin is perceived as earth, feminine, dark and passive. Yang is perceived as man, heaven, light and active.

The rat is associated with the earthly branch Zi and midnight hours. In yin and yang terms, the rat is yang and represents the beginning of a new day and also a sign of water. The closest Western correspondent sign is Sagittarius.

According to the Chinese lunar calendar, the Chinese New Year 2020 or the Spring Festival begins on Saturday, January 25th and for over 1000 years it has been the most important and widely celebrated Chinese event in the world. Associated with many fascinating legends and customs, it is a time for honouring deities and ancestors, full of prayers, offerings and other acts of devotion.

The festival date fluctuates, but falls in January or February. The Chinese year 4716 begins on January 25th, 2020 and is the Year of the Yang Metal Rat (Geng Zi). The Chinese New Year is also called the “Spring Festival” and “the Lunar New Year”, because it fits into the spring and is based on the Chinese lunar calendar.

According to a myth, the jade king said that the order will be decided by the order in which the animals arrived at his party. The Rat tricked the Ox into carrying him back to the party. Then, just as they reached the finish line, the Rat jumped ahead and took first place before the Ox.

In Chinese culture, rats were seen as a sign of wealth and surplus. Due to the breeding rate of this animal, married couples have prayed and worshiped him for fertility.

On the imperforated souvenir sheet of the issue, with the face value of Lei 28.50, all the animals of the Chinese zodiac are graphically reproduced along with the rat, shown on the postmark, all elements being printed in special colours (yellow UV).

The postage stamps issue “The Chinese Zodiac. Year of the metal rat” will be available on Thursday, January 23th 2020, in Romfilatelia’s shops network in Bucharest, Bacau, Brasov, Cluj-Napoca, Iasi and Timisoara and online on https://romfilatelia.ro/store/. The postage stamps issue is completed by the  “first day” cover and as page composition in sheet of 28 stamps, minisheet of 8 stamps with tête-bêche and imperforated souvenir sheet. 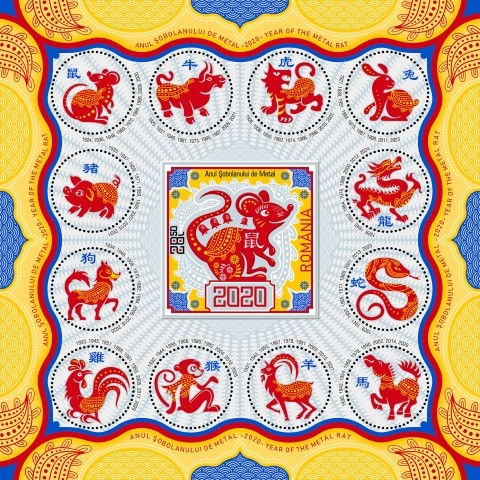 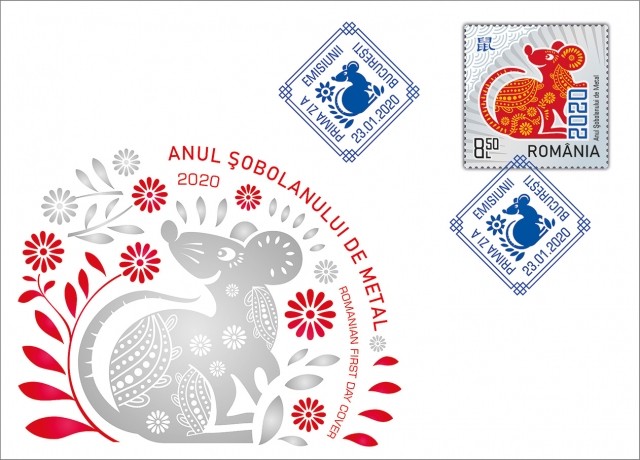 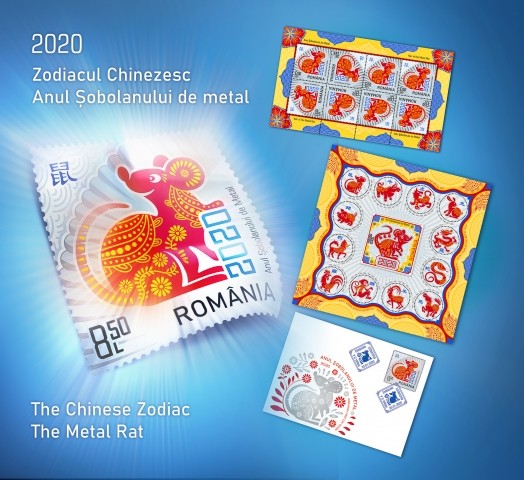 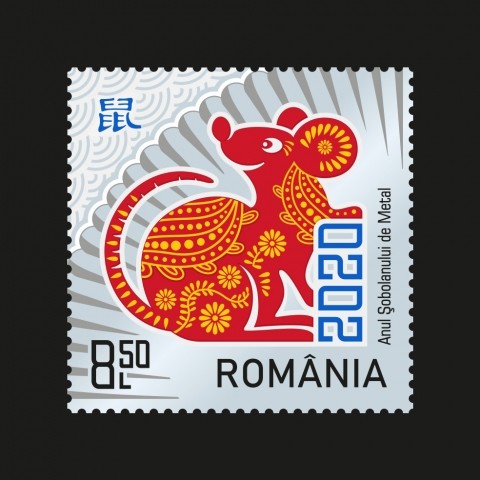 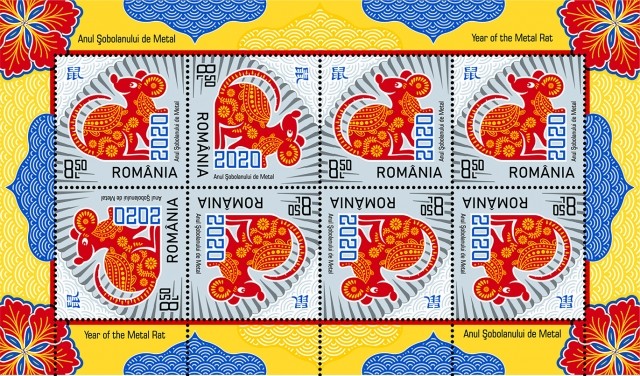