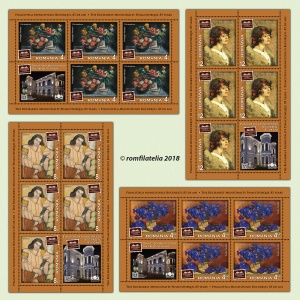 On the occasion of this special anniversary, Romfilatelia invites all collectors and art enthusiasts to celebrate and honor the considerable value of the works of art belonging to the patrimony of this important cultural institution, by introducing into circulation the postage stamp issue The Bucharest Municipality Pinacotheque, 85 years.

The stamps of the issue display four of the most representative and valuable works of art belonging The Bucharest Municipality Pinacotheque.

Zinnia (Carciumarese) painting, whose author is Gheorghe Petrascu, is illustrated on the stamp with the face value of Lei 4.00.

Another valuable artwork from the Pinacotheque’s patrimony, Cornflowers (Albastrele) signed by Stefan Luchian, is shown on the stamp with the face value of Lei 4.50.

On the stamp with the face value of Lei 8.00 is represented the painting Peasant Women (Taranca), by Theodor Pallady.

The painting bearing the name Woman Portrait with Red Scar (Portret de femeie cu esarfa rosie), signed by Nicolae Grigorescu, is reproduced on the stamp with the face value of Lei 12.00.

The inauguration of the Bucharest Pinacotheque, an interwar project that materialized on July 19th, 1933, summed up the successful endeavors of the Mayor Dem I. Dobrescu, supported by the donations made by three widows. Magdalena Marin had donated, in 1932, the art collection signed by her husband, the artist Filip Marin, Elena Movila that gifted away the Romanian and European art collection of the magistrate Ioan Movila, and least, Jana (Ioana) Urseanu donated to the City Hall, in 1933, the house where she had lived with her husband, Admiral Vasile Urseanu, today the “Admiral Vasile Urseanu” Astronomical Observatory, to become “… a shelter for art and an occasion for spiritual exaltation”. Thus, in 1939, the Bucharest Pinacotheque’s patrimony included about 250 works.

Between 1950 and 1952, valuable works of Romanian and universal fine art were transferred to the National Art Museum of the People’s Republic of Romania, by decisions of the Council of Culture and the Peopleʼs Council of Bucharest, in order to be exhibited and to express the pictorial national treasure. The Pinacotheque changed its name and followed a sinuous road together with the Simu Museum and the collection it owned. The Pinacotheque will function in this tandem until 1978, when the Anastasie Simu Collection moved to the Art Collections Museum.

If, in 1949, The Bucharest Municipality Pinacotheque counted 1,055 pieces, by acquisitions, donations and transfers performed over time, today, in its patrimony, there are over 5,500 artistic assets, that cumulate four valuable sub-collections: painting, graphics, sculpture collections and a small collection of decorative art. The rarity, the formal quality and the age of the countless works that may be found in its patrimony are reflected by their inclusion in the treasury and inventory categories, but not only this classification makes them special. The uniqueness comes also from the fact that it is the only collection in Bucharest that is not fragmented in terms of the art history chronology, possessing not only art works of modern Romania, but also contemporary Romanian art.

Although Pinacothequeʼs institution has undergone throughout history countless locative pilgrimages and turnarounds and is still lacking a permanent exhibition space, it maintains its commitment to both the passion for art and the noble scientific and educational quests, that it has been having in regard since the year of its establishment. The masterpieces of the art collection could be admired only in temporary exhibitions organized within the Bucharest Municipality Museum, or in collaboration with other institutions.

We have been keeping alive the passion for art since 1933! 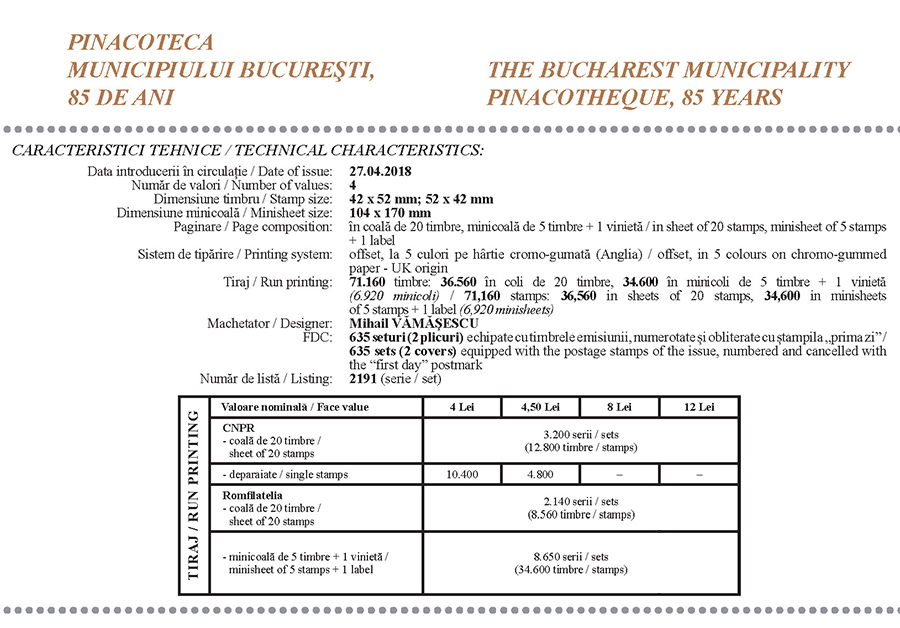