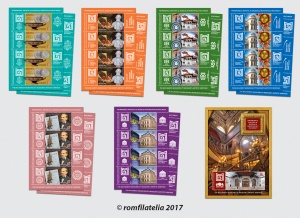 The Bucharest Municipality Museum was established under the name of “Bucharest Commune Museum” in 1921, by a decision of the Bucharest Communal Council, at the suggestion of Mayor Gh. Gheorghian. The actual opening of the museum was held on November 22, 1931, in the presence of Prime Minister Nicolae Iorga, as well as the first director of the Museum, the famous collector Dr. George Severeanu.

The George Severeanu Museum was the residence of the first radiologist in Romania, being representative of the way of life specific to the Romanian middle class from 1880-1920. The stamp with the face value of Lei 2.50 depicts a coin from Wallachia (14th century) and a Greek vase (about 500 B.C), both from the heritage of the museum.

On C. A. Rosetti Street, we encounter a particular building in Bucharest’s urban landscape, which shelters the Theodor Aman Museum, the first art museum in the capital. The eclectic building, which is assimilated to the French Neo-Classical style, is the home where Theodor Aman lived and created for nearly 22 years (1831-1891), conceiving every detail of this true „temple of art”. At the same time it was the first home-workshop in the Romanian space, intended from the very beginning to become a museum. The bust of the painter and the painting Cherries – oil on canvas, are illustrated on the stamp with face value of Lei 2.70.

The patrimony of the Museum of Doctor Nicolae Minovici, illustrated on the stamp with a nominal value of Lei 3.50, reflects the art interest of a collector from the beginning of the 20th century, where textile objects (shirts, blouses, wool, scratches, blanchets) predominate alongside ceramic ones. The museum also holds representative collections of icons, painted eggs, and wooden objects specific to the local peasant household.

In 1907, the first Romanian astronomical society appeared, named after Camille Flammarion, the well-known popularizor of sience in France. His friendship with the Romanian, Victor Anestin, inspired the latter to make some of the „secrets of heavens” known to the public. Since then, astronomy enthusiasts from all over the world have been able to see the spectacles of the celestial vault in the dome or on the „Admiral Vasile Urseanu” Astronomic Observatory’s terrace, illustrated on the stamp with the face value of Lei 4, together with one of its beautiful stained glass window.


The edifice of the Victor Babes Museum was erected by Mircea Babes, the only son of the scholar, between 1928-1929. The high and spacious rooms create, through the objects on display, the atmosphere of the beginning of the 20th century. From the very beginning, Mircea Babes conceived the space to commemorate his father, bringing all the objects that belonged to the scholar, from his period of directorhip of the Institute of Bacteriology, which today bears his name. The microscope designed by Babes and his portrait appear on the stamp with a face value of Lei 4.50.


The Filipescu-Cesianu house, illustrated on the stamp with the face value of Lei 15, is an example of the restoration of an older residence from 1846-1850 and is one of Belle Époque’s few typical aristocratic residences of Bucharest which is still true to its original design.

This house was home to several families belonging to the Romanian aristocracy, such as that of Iancu Filipescu and Maria Ghica Filipescu. Constantin Cesianu extended the house with the help of the architect Leonida Negrescu, in 1892. On this occasion, the exterior ornaments and the imperial roof were added and the residence’s park was created.

On December 10, 1956, the museum was awarded the Sutu Palace (the current administrative headquarters of the institution, which is also hosting the permanent exhibit Time of the City).


The Sutu Palace, whose interior is illustrated on the souvenir sheet of the issue, having the stamp with the face value of Lei 16, is one of the oldest aristocratic residences in Bucharest and one of the few buildings which have remained unchanged for more than 150 years. The second half of the 19th century was the Palace’s golden age, the first ball of each year taking place here, every February.  Romfilatelia thanks the Bucharest Municipality Museum for the documentary support granted in the creation of this postage stamp issue. 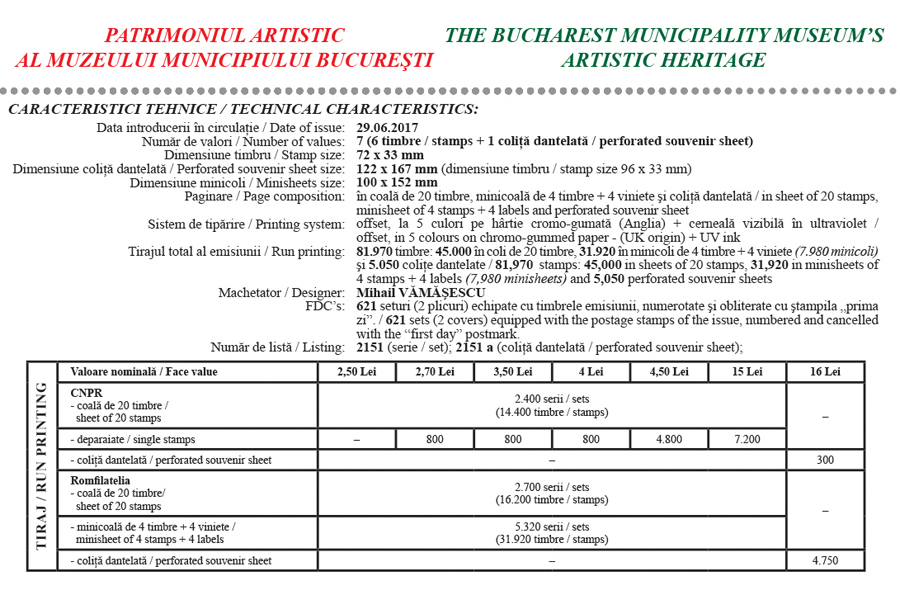