Romfilatelia dedicates THE BUCHAREST CIRCUS postage stamp issue to this traditional institution, which, over time, by the remarkable representations of its artists contributed to the development and inclusion of the Romanian Circus into the elite of the World Circus.

With a history that has its roots in Antiquity and spectacularly evolving over time, the circus signifies that wonderful childhood performance that reunites true artists under its dome.

A brief incursion into circus evolution reveals the presence of this type of art on all continents. The statues in the sacred tombs of Egypt, the columns of the Thebes fortress, the ruins of Rome and other parts of Italy, as well as of Southern France, bas-reliefs and drawings on rocks, all are testimonies over the ages for the existence of this art form.

On the territory of our country, the circus begins its story with the occupation of Dacia by the Romans, when the first forms of organization specific to Roman society began to appear. Thus, the Circus, present in the coliseums built by the Romans, had quickly gained great popularity until the beginning of the Aurelian retreat (year of 271). Later, in the wake of the economic downturn, circus games ceased.

In the feudal period, both in Moldavia and Wallachia, entertainment took place in the mansion houses, on the occasion of religious celebrations or other family events. Later on, the shows found their place in the streets, city markets, or traditional festivals.

One of the pioneers of the modern Romanian circus was Theodor Sidoli, an Italian settled on our realms, that distinguished himself and became really famous especially by his act of horseback riding. In 1874, on the site of the current Gambrinus Brewery, Sidoli opened the first professional local circus under the name of The Sidoli Circus.

From its first expressions to the present day, the circus has experienced not only years of glory but also very difficult years, especially during the period of the two World Wars.

The year 1954 represents an extremely important moment in the evolution of the Romanian Circus – the establishment of the State Circus. Located originally on Nicolae Balcescu Blvd., the place became soon inappropriate for the public’s demands.

A new edifice was necessary to be built. On the site of former brick factories and wood warehouses, is where today the State Circus displays its thole, on the Aleea Circului in District 2 of the capital.

The current headquarters, built during the Communist period (1960-1961), creation of the joint effort of the architects Nicolae Porumbescu, Nicolae Pruncu and Constantin Rulea, was declared a historic monument in 2010.

The building, a modern assembly composed of central ring and annexes, is covered with a reinforced concrete dome in the form of a waving tarp.

The central ring is concentric in shape, so that the circular arena with a diameter of 13 m captures all the spectators’attention.

Regardless of the name under which it was known, at the beginning State Circus, then Globus Circus, for a short period, Globus Circus & Variety, and today the Bucharest Metropolitan Circus, under its dome over time evolved a series of remarkable artists – acrobats, illusionists, comedians, trainers – who, by passion, hard work and talent, created complex, modern, bold and exceptional performances, pantomime, extravaganzas, classical characters and new comedies, spectacular acrobatics, thus contributing to the inclusion of the Romanian Circus into the elite of the world circle and meeting the exigencies of all categories of spectators.

Recognition of the value of Romanian artists did not fail to appear. They brought home to Bucharest no less than 3 Bronze Clowns, a Golden Lion and many other awards, most of them obtained at the prestigious Monte Carlo Circus Festival.

The stamp with the face value of lei 3.50 illustrates the poster of a 1995 show.

The stamp with the face value of lei 4 illustrates a horses’ show.

The contortionist acrobat is illustrated on the stamp with the face value of lei 4.50.

On the stamp with the face value of lei 15 is a clown, the representative image of the circus.

Romfilatelia thanks the Bucharest Metropolitan Circus for the documentary support to the granted in the creation of this postage stamp issue. 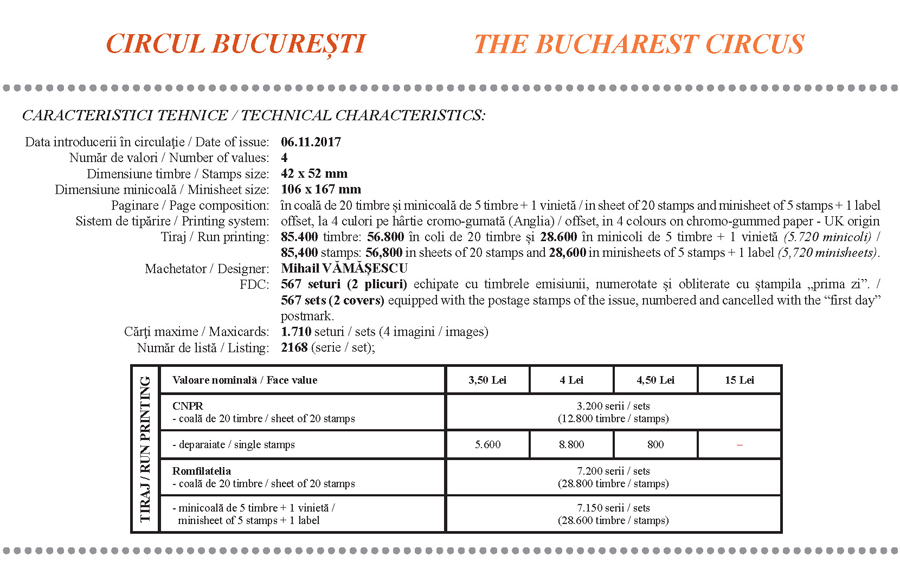