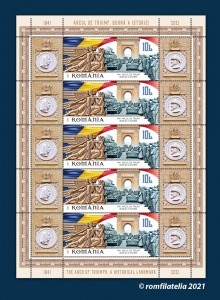 On the occasion of the National Day of Romania, or the Great Union Day, Romfilatelia will introduce into circulation on Wednesday, December 1st, 2021, the postage stamps issue The Arch of Triumph, a Historical Landmark (1941-2021).

Along with the Coronation Cathedral in Alba Iulia, the Mausoleum of Marasesti, the Cross of the Nation’s Heroes on Mount Caraiman and the Tomb of the Unknown Hero in Carol I Park, the Arch of Triumph is on the list of monuments commemorating Romania’s participation in the First World War to the Allies’ side, at the end of which the territories inhabited by Romanians were found in what represents Greater Romania. In three other previous situations, several similar temporary constructions were built to mark Romania’s victory in the War of Independence (1878), the jubilee of 40 years of reign of King Carol I (1906) and the return of the Romanian royal family from the exile from Iasi (1918). In 1922, in the context of the coronation of King Ferdinand I and Queen Maria as sovereigns of Greater Romania, the commission for the organization of the coronation celebrations used the services of the architect Petre Antonescu to create an imposing Arch of Triumph. The short time allocated to the construction allowed only the pouring of the concrete of the monument’s skeleton and the realization of the wonderful exterior bas-reliefs in plaster.

On October 16th, 1922, the festivities organized around the Arch of Triumph were attended by representatives from over 20 European states, the United States and Japan, which meant a wide international recognition of the Kingdom of Greater Romania. After a decade, the construction of the Arch of Triumph begins to take on a new shape, in which the initial bas-reliefs were made of stone or Ruschita marble. Among the artists who were present at the works were Constantin Baraschi, Ion Jalea, Dimitrie Paciurea, Costin Petrescu. Thus, the symbols of Victory and the allegories of Manhood and Faith (belonging to Ion Jalea and Constantin Baraschi) were made. The completion of the monument dates back to 1936, when the current shape is made in the classical style, after the model of the great Arch of Triumph in Paris. The inauguration ceremony took place on December 1st, 1936, when it was 18 years since the Union of Transylvania with Romania. Among the participants in the festivity were King Carol II, mother Queen Maria, Crown Prince Michael, members of the Romanian government and numerous guests of honour from the country and abroad. It should be mentioned that the effigies of King Ferdinand I and Queen Maria, made by the sculptor Alexandru Calinescu, were removed and destroyed by the communist regime. After 1989, two bronze medallions were installed in their place, depicting the faces of King Ferdinand I and Queen Maria.

In 1941, on November 8th, on the feast of Saints Michael and Gabriel, the name day of King Michael I, a military parade was organized to honour the heroes who fell in the battles for the liberation of Bessarabia and Northern Bukovina. One by one, under the Arch of Triumph, on Calea Victoriei and through the Royal Palace Square, units from the Guard Division, the Border Guard Division and the Armored Division paraded. The ceremony was opened by officiating a religious service in the square in front of the Arch of Triumph, after which the flags and officers were decorated with the “Michael the Brave” Military War Order. The Minister of National Defence read the high decoration decree, after which His Majesty the King proceeded to the decoration of each officer. After the parade, the Knights of the “Michael the Brave” Military Order of War were invited to the festive meal given in their honour at the Royal Palace.

The anniversary postage stamps issue, consisting of a postage stamp with a face value of Lei 10 and a First Day Cover suggestively illustrates the military parade of 1941 (postage stamp) and a current military parade of December 1st (First Day Cover). The architectural detail of the Arch of Triumph symbolizing Victory and the vignettes that reproduce the effigies of Queen Maria and King Ferdinand I harmoniously summarize the idea and significance of the event dedicated to the honouring of the heroes and the “Unifier” Kings of Greater Romania.

Romfilatelia thanks the Ministry of National Defence and the Romanian National Military Archives for the documentary and photographic support provided for the development of this postage stamps issue. 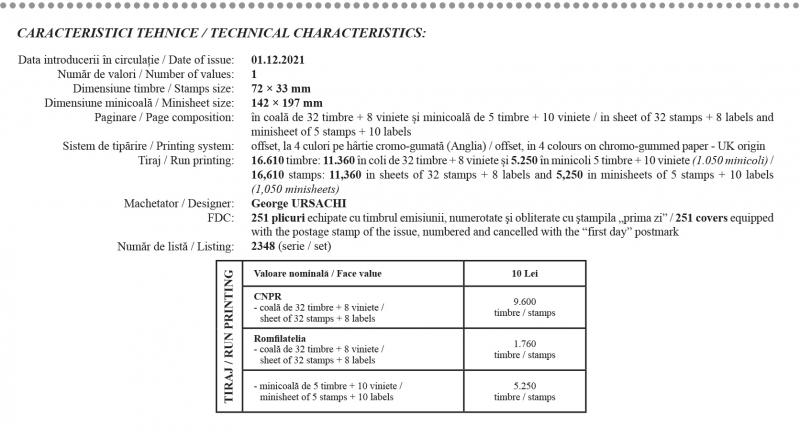