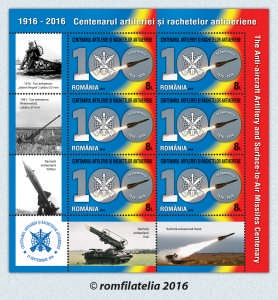 The celebration of 100 years since the establishment of the Romanian Artillery and Anti-aircraft Missile branch constitutes an important opportunity to highlight its traditions and also an interesting subject for accomplishing an anniversary postage stamp issue.

In actions for the defence and liberation of the national territory, anti-aircraft artillerymen found themselves in legendary feats of heroism, performing many missions that were included in the golden chronicle of great victories.

Starting from the adaptation of field or fortress artillery for gunnery and reaching complex systems of surface-to-air missiles, the Artillery and Anti-aircraft Missiles branch has become, over time, an essential component of the Romanian airspace defence.

Thus, the anti-aircraft artillery was born on August 15th, 1916, when Romania entered World War I, with an established Anti-aircraft Artillery Corps, under the command of Captain Gheorghe Ciurea.

On September 19th, 1916, during the manoeuvre from Flamanda, Romanian anti-aircraft artillerymen shot down an enemy plane on the Romanian bank of the Danube.

This first victory became the reason the day of September 19th, 1916, was adopted as the Artillery and Anti-aircraft Missiles Day.

The Romanian artillery’s participation in battles of Marasti, Marasesti and Oituz meant an increase in warfare efficiency, through the acquisition of superior procedures and technical methods, a fact confirmed by the numerous appreciations and decorations received from both Romanian and allied upper echelons.

For the development of the artillery, the interwar period represented a milestone in all areas: organization and endowment, teaching the military personnel and the unit, the development and modernization of the means of production and repair, and in the field of means and techniques of Anti-aircraft Defence.

In this sense, the activity of colonel Ion Bungescu, the inventor of a powerful central gunnery management device and founder of various educational institutions, remains memorable.

The batteries of anti-aircraft artillery, both middle and small calibre, as well as machine guns, ensured the protection of troops, during WWII, in the campaign on the Eastern and Western fronts, but also the main strategic objectives found on national territory.

In the communist era, Air Defence entered the age of the missile, starting a second phase for those who have as their mission the banning of unauthorized aircrafts entering the Romanian national space.

Currently, the artillery and air defence missiles troops are in a continuous process of training and upgrading, to be capable of meeting the national defence requirements, at the standards imposed by N.A.T.O.

Artillery and anti-aircraft missiles represent the experience of the last century, gained nationally and internationally. The chronicle of the weapon’s evolution, from its foundation to the present, is dotted with numerous acts of heroism, feats of arms of the artillery and the anti-aircraft missile units, who were able to turn the mission into a sacred and noble duty.

To celebrate the 100th anniversary since the establishment of the Romanian artillery and missiles, Romfilatelia introduces into circulation the thematic postage stamp issue entitled The Anti-aircraft Artillery and Surface-to-air Missiles Centenary. 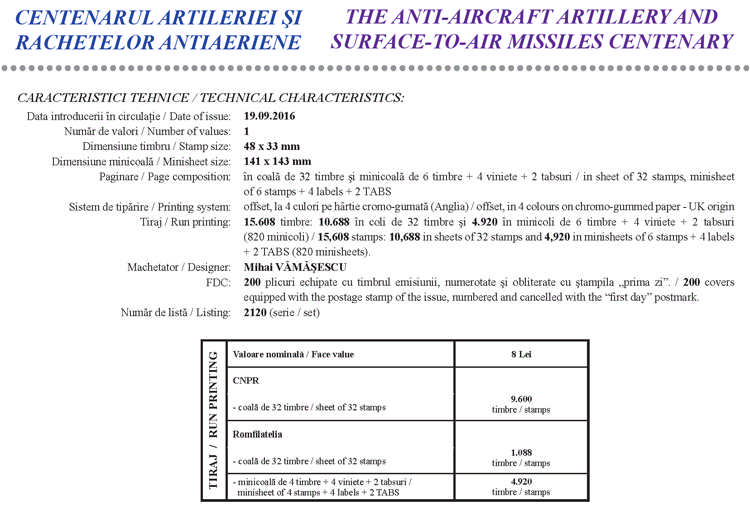