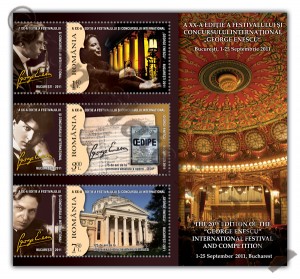 53 years ago, at the initiative of the conductor George Georgescu, there was organized in Bucharest the first edition of “George Enescu” International Festival and Competition.

53 years ago, at the initiative of the conductor George Georgescu, there was organized in Bucharestthe first edition of “George Enescu” International Festival and Competition.

This Festival wanted to be not only a sign of acknowledgement of Enescu’s genius, but also a homage paid to his life and creation.

During the first editions, prestigious names of the world music gathered on the stage of the Festival among whom can be mentioned Lord Yehudi Menuhin, Sviatoslav Richter, Herbert von Karajan or David Oïstrakh.

At 130 years since George Enescu’s birth, the 20th edition of the Festival that takes place in Bucharestbetween 1 and 25 September 2011, will comprise Concert Evenings under the titles: World Great Orchestras, Recitals and Chamber Concerts, Midnight Concerts, World Music, Opera and Ballet Performances, 21st Century Music, Enescu and his Contemporaries and the City of Culture.

During the first edition of the Festival in 1958, the Romanian première of Enescu’s musical work “Oedipus” took place, starring David Ohanesian as main character.

The world première took place at Opera Garnier inParis, on 13th of March 1936 and it was a homage paid to Maria Rosetti-Tescanu, the George Enescu’s wife-to-be.

“George Enescu stirred admiration. He was a magnificent violinist, an excellent pianist and a highly appreciated composer as well… “Oedipus” is one of the most amazing contemporary musical works.” (1944, Piero Copolla, Italian composer and conductor)

During the nineteen editions of the Festival, “Oedipus” was staged several times, but one of the most spectacular stagings of the opera was done by Andrei Serban, in 1995. The opera was also performed on lyrical stages inItaly,Germany,Austria, theGreat Britainand theU.S.A.

The Romanian Athenaeum hosted all the editions of the Festival, the acoustics of its hall being one of the best in the world.

125 years ago, the foundation of the Romanian Athenaeum was laid on the location belonging to Vacaresti family and where there had been grounded the riding house of the “Romanian Equestrian Society”.

Part of the funds alloted for the construction were collected by public subscription, the call “Give one leu for the Athenaeum!” being famous.

The plans of the Athenaeum were designed by the French architect Albert Galleron.

The building has a peristyle supported on eight Ionic columns. Between the peristyle and columns there are large mosaic medallions representing Neagoe Basarab, Alexandru the Kind, King Carol I, Vasile Lupu and Matei Basarab. The construction ends with a decorated cupola.

The concert hall has about 800 seats out of which 52 boxes. Above them,except the stage, there is a monumental fresco, 3 m wide and 70 m long, made by the painter Costin Petrescu between 1933 and 1939. In its 25 scenes, the fresco exhibits important moments in the history of the Romanian people.

Since 2007, the Romanian Athenaeum, together with theCantacuzinoPalace(“George Enescu”NationalMuseum), have been introduced in the European Cultural Heritage.

On the occasion of the 20th edition of “George Enescu” International Festival and Competition, the 75th anniversary of “Oedipus” world première and the 125th anniversary since the foundation of the Romanian Athenaeum, Romfilatelia introduces into circulation a postage stamps issue dedicated to these important events. 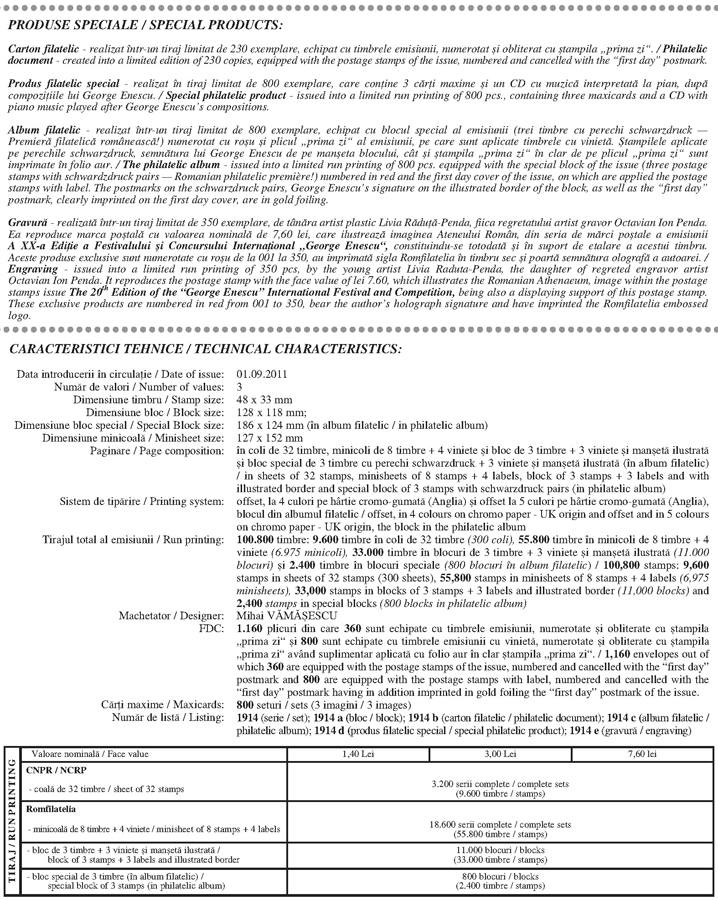