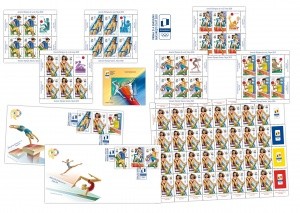 On the occasion of the most looked-for sports event of the year 2021, Romfilatelia introduces into circulation, on Friday, 23rd July, this year, the postage stamps issue Summer Olympics Games, Tokyo 2020.

In Tokyo 2020, the summer edition of the Games of the XXXII Olympiad, the first in history to be postponed, around 100 athletes under the colours of the Romanian tricolour will attack the Olympic podium in 17 sports.

The Romanian national football team returns to the Olympic competition after 47 years since the last participation, also in the capital of the Land of the Rising Sun.

The 3×3 Women’s Basketball Team will make their debut at the Olympics Games with this sport.

In rowing, no less than 36 rowers will fight for the Olympic medals in 9 competitions.

Also, for the first time, the tricolours will participate in the Olympic mountain bike cycling and triathlon competitions.

In gymnastics, at his 5th participation in the Olympics, Marian Dragulescu will fight to write history at the age of 40 and to win the Olympic title, the only one he lacks in his rich record. Along with him will compete the colleagues from the women’s gymnastics group, Maria Holbura and Larisa Iordache.

In fencing, Ana-Maria Popescu, number 1 in the world sword standings before the Games, will duel for another Olympic title at her 5th Olympic participation, while Iulian Teodosiu, Olympic bronze medallist with the sword team, will fight in Tokyo for medals in single relay.

In swimming, Robert Glinta, the first Romanian to obtain tickets for Tokyo 2020, and Daniel Martin will compete in the 100 m backstroke, and David Popovici, the youngest member of TEAM ROMANIA at the age of 16, will attack the highest place possible in the standings at 100 m freestyle.

In canoeing, Catalin Chirila and Victor Mihalachi, coordinated by the Olympic champion Florin Popescu, will fight to transform European gold into Olympic gold.

In wrestling, Albert Saritov, Olympic bronze medallist in Rio, and the world vice-champion Alina Vuc, together with Alin Alexuc-Ciurariu, present for the 3rd time at an edition of the Olympics, and the debutants at the most important sports competitions in the world, Andreea Ana and Kriszta Incze, are fighting to overcome themselves.

In shooting sports, Laura Ilie, three-time European champion, dreams of the first step of the Olympic podium in the 10 m compressed air rifle, and in table tennis, the four tricolours in the group will try to climb the huge wall of Asians and reach the podium in at least one of the 5 competitions in which they participate – women’s teams, women’s & men’s singles, mixed doubles.

In boxing, Cosmin Gîrleanu and Claudia Nechita, who will climb for the first time into the Olympic ring, dream of crossing their gloves for the brightest medals.

For all the tricolours, as well as for the performers from all over the world, it is an honour to participate in the Tokyo 2020 Olympic Games, rescheduled in 2021, the competition considered the symbol of victory of sports and the Olympic Movement in the fight against the coronavirus pandemic.

Since its first participation in the Olympic Games, in 1924, in Paris, when it also obtained the first medal – bronze in rugby -, the Romanian Olympic Team was absent only at the summer editions of the Olympic Games in 1932 and 1948 and at the winter edition in 1960.

TEAM ROMANIA has a record of 305 medals – 89 gold, 94 silver and 122 bronze, a bronze medal being obtained at the Winter Olympics.

The six stamps of the issue, with face values of Lei 1.70, 2, 2.20, 7, 9 and 10.50, and the souvenir sheet with the face value of 31.50 Lei feature stylized images of sportspeople in various fields of sports: football, rowing, swimming, discus throw, tennis, table tennis and fencing, respectively. The Two Firs Day Covers show athletes in artistic gymnastics performing routines on different apparatuses.

Romfilatelia thanks the Romanian Olympic and Sports Committee for the documentary support offered for the development of this stamps issue. 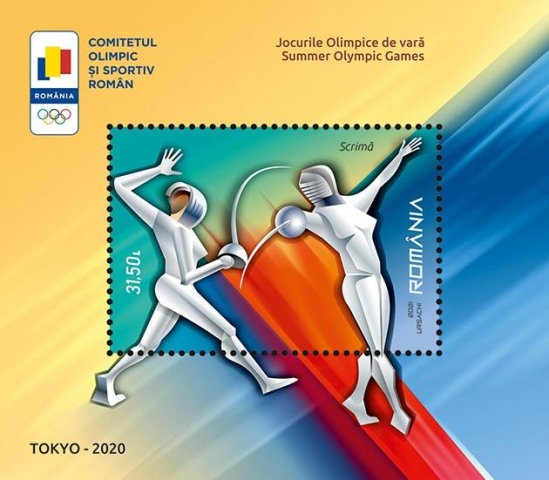 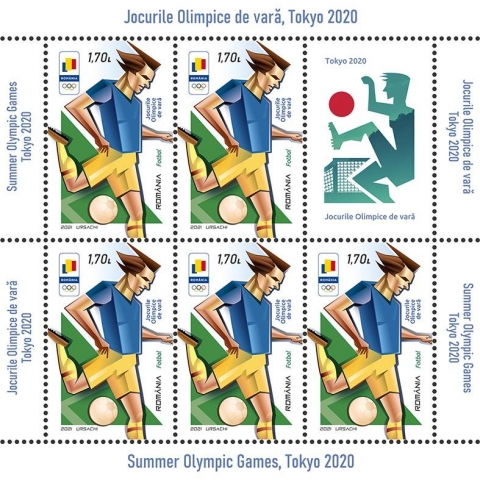 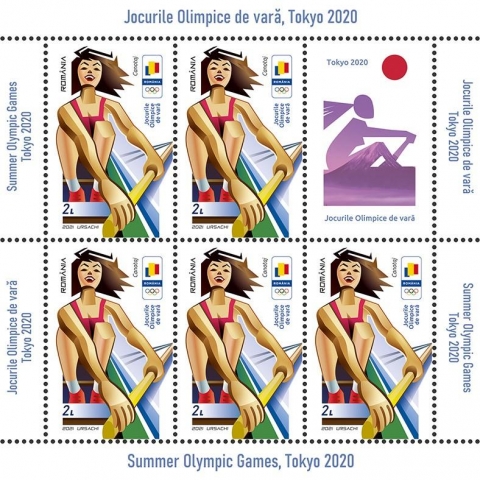 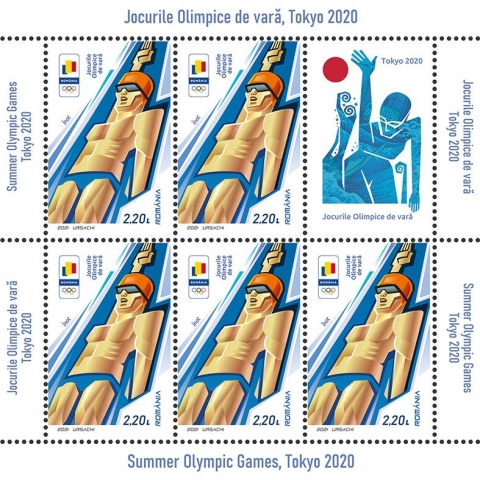 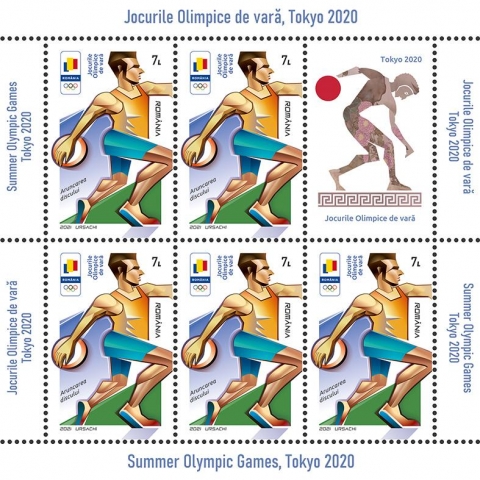 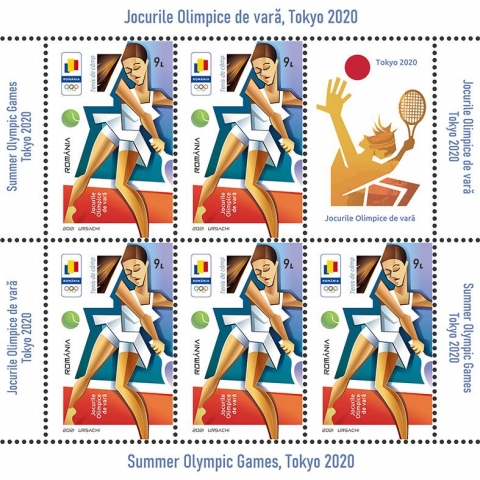 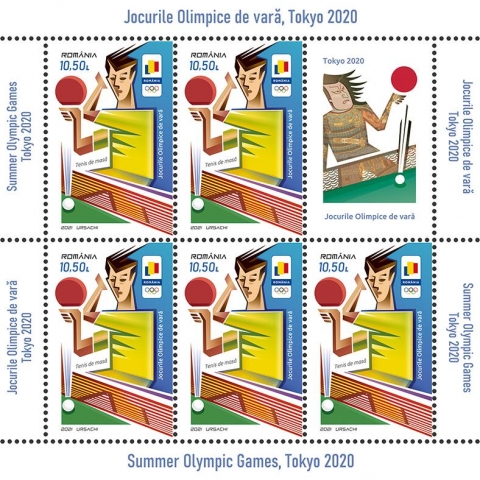 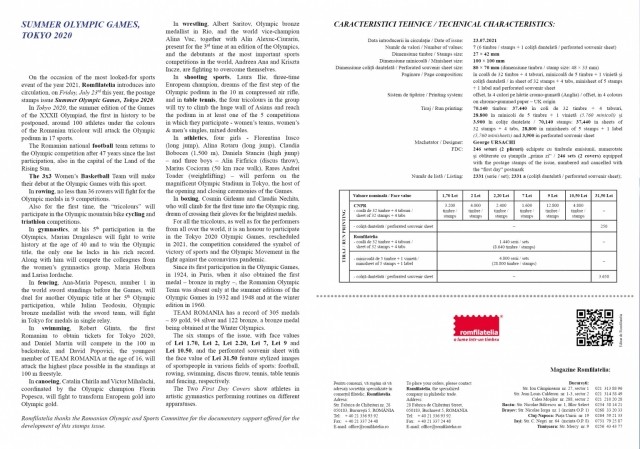 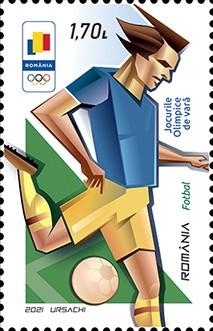 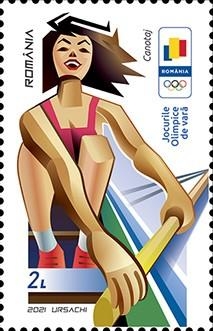 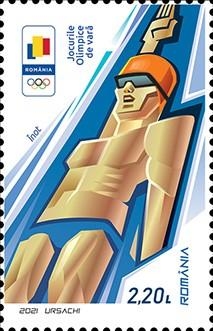 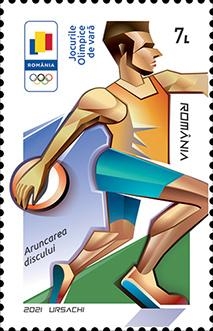 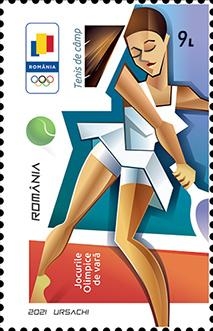 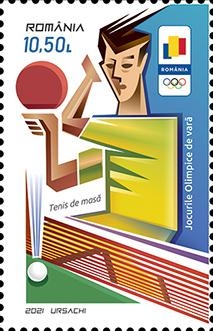