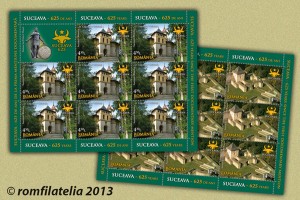 “In the world glory fades away / Like in a dream, just like sea foam! / Up there, in the fortress of Suceava / I say: Sic transit gloria mundi!” (Prince Dabija’s Shadow – Mihai Eminescu)

This year marks the 625th celebration of the documentary certification of Suceava, in a document issued on 11th February 1388 in the “Fortress of Suceava”.

The two stamps of the philatelic issue illustrate the Seat Fortress of Suceava and Saint George Church – Mirauti.

The Fortress of Suceava was built during the reign of Petru I Musat (1375-1391). It must be noted that the ruler minted the first coin ofMoldavia – the silver groschen.

Suceava became Seat Fortress and continued to be one until mid-16th century,when the Moldavian capital was transferred toIasi.

The Fortress of Suceava was the most important citadel inMoldavia, a clear proof of this being its resistance to extremely tough attacks. Surrounded by solid walls bastions and a moat, it was designed as unconquerable.

In 1476 the armies of Muhammad II siege the fortress without succeeding in conquering it, and contented themselves only with burning the city down. Later on, in 1497, the Polish armies of John Albert return to their country after having sieged the fortress for 21 days.

A new turning point is represented by the Ottoman campaign led by Suleiman the Magnificent himself, who came to relegate the ruler ofMoldavia, Petru Rares. Following a betrayal from the boyars, Suleiman occupies the fortress and seizes the entire treasure ofMoldavia, wealth which amazes even the Ottoman chroniclers accompanying the campaign.

The last episode in the history of the fortress as citadel is written during the reign of Dumitrascu Cantacuzino when, on the command of the Turks, “they filled it with wood and straws, then set fire to them and burned it down. Afterwards having weakened the wall, they dissipated”. (Nicolae Costin)

After a few years, the destruction is completed by a powerful earthquake.

Another holy place built by Petru I Musat is the Saint George Church – Mirauti. Monument existing since the 17th century, with subsequent restorations, it still maintains the foundation of the church built at the end of the 14th century as ordained by Petru I.

Located halfway between theRoyal Courtand the Seat Fortress, theMirautiChurch, the oldest one from Suceava, served as the first headquarters of the Metropolitan Church of Moldavia.

This place of worship housed for almost two hundred years the relics of “Saint John the New” brought here by Alexander the Good. It is said that this was the place where Stephen the Great became the ruler ofMoldaviaand his first wife, Evdochia of Kiev, was buried in the same place of worship.

The remarkable history of this church spreads over several hundreds of years, but its serious damaging, at the end of the 16th century, most likely following an earthquake, led to its abandonment and the transfer of the newMetropolitanChurchheadquarters in the church started by Bogdan III (1504-1517) and finalised by his successor.

Subsequently, bricks and stone from the church were used for other constructions and, during the 19thcentury, it was transformed into an ammunition storage area and warehouse.

In 1886, after an intervention from the Archbishop, the land where the church ruins laid was enclosed. Afterwards, on the expense of the Orthodox Religious Fund, the restoration of the place is initiated and conducted between 1898 and 1903. The restoration will be coordinated by the Austrian architect K. A. Romstorfer and the church will be painted by the Viennese painter Karl Jobst.

Between 1991 and 2002, the church was subject to a comprehensive restoration and preservation programme, which restored its architectural and historical values.

We thank the Bucovina Museum in Suceava for the support granted in the accomplishment of this postage stamps issue. 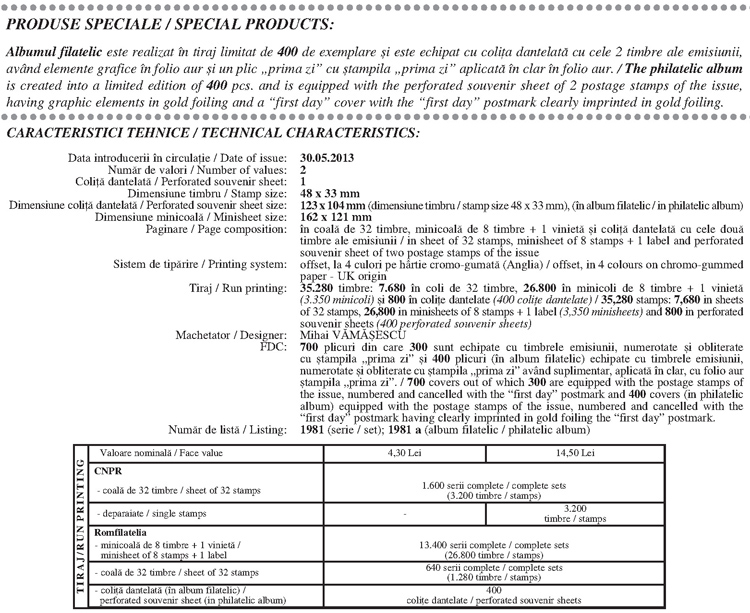