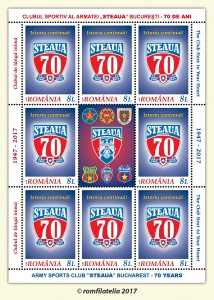 The “Steaua” Bucharest Army Sports Club has a 70-year tradition and an impressive record. The history of the club begins in 1947, with the establishment of the Army Sports Association, a moment celebrated by Romfilatelia through the postage stamp issue Steaua, 70 years since the founding.

Army Sports Association was created to respond to the need for young athletes which enrolled to receive military training, to continue in an organized manner the completion of their sporting craftsmanship; at the same time, it aimed to provide the talents of the army’s permanent cadres a possibility to assert themselves in the realm of sporting performance.

The first section of the club was football, which, after the reorganization of the championship system, was admitted to the first division of the country, following the contest of the barrage games. Also in 1947, the following sporting sections were founded: horse riding, fencing, tennis, boxing, volleyball, athletics, shooting.

The club itself suffered many changes in name, dictated by the rigours of time, but kept its military character and the desire to reach sporting excellence.

These name changes were also reflected in changes of emblem, but keeping the beloved colours of red, white and blue. The stamp if the issue, with the face value of Lei 8, illustrated the club’s anniversary logo.

The main objective of the Army Sports Club “Steaua” Bucharest is to promote physical education and sport in the democratic spirit, with an accent on individual sports.

Today the club is proud of its impressive sporting heritage, which included hundreds of medals (gold, silver and bronze) received worldwide, and on a European and national level.

With dozens of sporting and social events organised every year, the club fulfils its missing of attracting as many people as possible on the beneficial path of a healthy life, which includes sport, be it for performance or just fun. Initiation programs target the young generation, from which, inevitably, through hard work and dedicated effort, tomorrow’s champions will emerge ready to continue the proud tradition of Army Sports Club “Steaua” Bucharest.

Romfilatelia thanks the Army Sports Club “Steaua” Bucharest for the documentary support granted in the creating of this postage stamp issue. 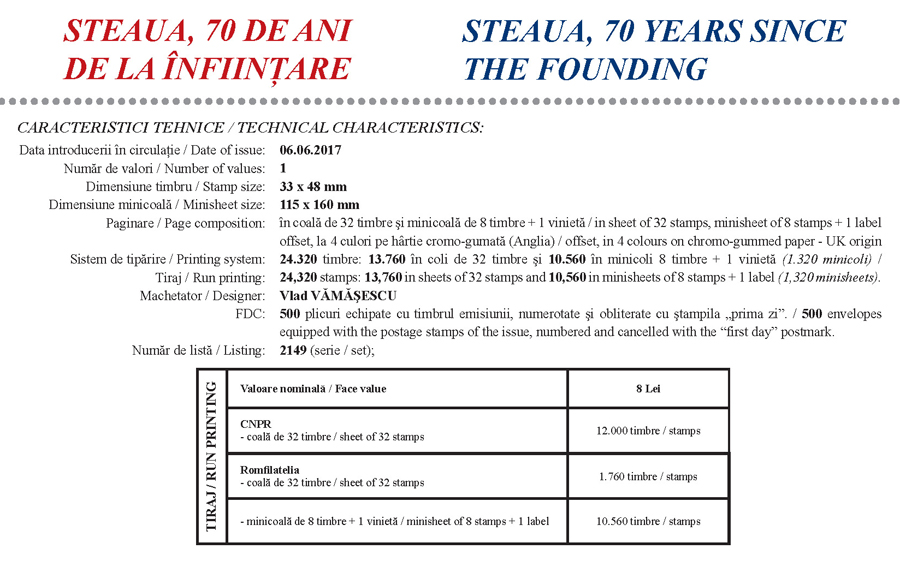