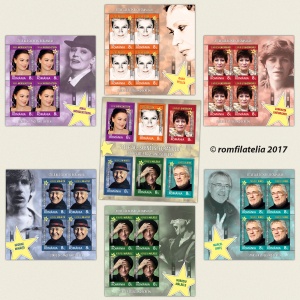 Romfilatelia dedicates the postage stamp issue Stars of Stage and Screen to some of the most appreciated and beloved Romanian actors, who, throughout their careers, have promoted cultural values, contributing to the creation of artistic Bucharest.

The stamps, each with the face value of Lei 8, illustrate the portraits of actors Maia Morgenstern, Oana Pellea, Luminita Gheorghiu, George Mihaita, Horatiu Malaele and Marcel Iures, personalities of the Romanian stage and screen.

At the State Jewish Theatre, where she has been manager since 2012, she made remarkable roles in Tonight: Lola Blau, Kings’ Game, Driving Miss Daisy, or Park your car in Harvard yard. On the stage of the Bucharest National Theatre, she played roles in A Midsummer Night’s Dream, The Visit of the Old Lady, The Cherry Orchard, Catherine the Great or The Bourgeois Gentleman, and at The Metropolis Theatre in Jubilee, A Stormy Night etc. She collaborates with other theatres, from Bucharest and the country – Bulandra Theatre, Odeon Theatre, Mic Theatre, “Radu Stanca” National Theatre in Sibiu, as well as with other theatre and film personalities over the world.

We can see her in films like The Secret of Bacchus, The Oak, The Earth’s Most Beloved Son, Orient Express, The Passion of the Christ, The End of Silence, The Secret of Polichinelle, or Miss Christina.

The actress also starred in 20 films, some of them international productions, including Sand Cliffs; With Love, Rita; Never enough, I Really Hate My Job, One Step Ahead, Biblioteque Pascal or Fire & Ice: The Dragon Chronicles. In 2006, she co-starred Clive Owen and Julianne Moore in Children of Men, a film directed by Alfonso Cuaron.

The Romanian Academy awarded her with Aristizza Romanescu Prize for the theatrical and cinematographic career.

His Majesty, King Michael I of Romania, conferred Oana Pellea the Cross of the Royal House of Romania Decoration, on October 25th, 2012.

In the theatre, she made memorable roles in plays like Strindberg’s The Pelican, Marin Sorescu’s A cold, Chekhov’s Uncle Vanya and Three Sisters, Shakespeare’s The Winter’s Tale, or Catherine Aigner’s The old woman who listens Abba.

Equally attracted by theatre and film, the actress made a breakout with the role of Catrina from the film Morometii. She rose to international fame with her role in The Death of Mr. Lazarescu, and with the collaboration with the director Michael Haneke, in Code Unknown, as well as in Time of the Wolf. Her rich filmography, with over 35 roles, brought her numerous awards: The Excellency Award (Iasi International Film Festival, 2009, TIFF Festival, 2013), Bucharest Municipality Award of Best Actress for the 2008-2009 Theatrical Season, The Prize of Honour for extraordinary merits brought to Romanian Cinematography (GE-FO-RUM & Filmmuseum Munich, 2013), the Best Actress Award and the Academy Award at the UCIN 2013 Gala for the role from Child’s Pose and I’m an old Commie! Luminita Gheorghiu also received a nomination at the European Film Awards 2013, for her role in Child’s Pose, film that was awarded with the Golden Bear at the Berlin International Film Festival.

George Mihaita, born on September 23rd, 1948, is an emblematic actor of the Romanian stage that has become famous in theatre and film through talent, facial expressivity, and also specific voice. Since 2002 he is the director of the Comedy Theatre.

He studied The Art of Acting at the Institute of Theatre and Film from Bucharest and graduated in 1971. A Lost Letter, The Matchmaker, The Cherry Orchard, The Wisdom-Tooth, 12 Angry Men, A Stormy Night, Poker, The Italian Straw Hat – are just a few of the theatre plays from the artist’s repertoire. With the stage play The Government Inspector by N.V. Gogol, directed by Horatiu Malaele, in which George Mihaita plays the role The Mayor, the actor has participated to numerous European festivals.

He made his screen debut with the role of Vuica in the movie The Reenactment, designated by the Film Critics Association as the best Romanian film of all time, which was a breakout role that significantly contributed to the development of his career.

During his 45 years of work, he has been cast in over 70 films: The Accident, The Man of the Day, Veronica, Somewhere in Palilula, The Survivor, Silent Wedding etc.

The talent and passion for the scene brought him many awards, such as: Best Actor 2010 (the UNITER Gala Award for the role of Ametistov in the play Zoika’s House), Best Actor 2007 (National Comedy Festival, Galati and JoakimInterFest Festival, Kragujevac, Serbia, for the role The Mayor from the play The Government Inspector).

As a founder and president of the UNESCO Club Adolescentii he has been involved in this field and has set up the Jos Palaria Theatre Festival for High School Students.

In 2002, he was decorated with the National Order for Faithful Service in the rank of Knight, “for the devotion and artistic grace put in the service of the Romanian theatre”.

In theatre he played memorable roles in: Servant of Two Masters and The Liar by Carlo Goldoni, The Tót Family by Istvan Orkeny, The Karamazovs based on the novel of Dostoyevsky, Scapin by Moliere, Decomposed Theatre by Matei Visniec, The Suicide by Nicolai Erdman, Uncle Vanya by Chekhov, Dinner for Schmucks by Veber etc.

In 2009, at the National Theatre in Bucharest, he made his directorial debut with The Lesson by Eugene Ionesco. Later on, he staged The Flea by Georges Feydeau, The Oxen Meadows and The Jester after Chekhov, The Café after Sam Bobrik, The Government Inspector by Gogol, Shylock by Gareth Armstrong etc.

Throughout his career, Horatiu Malaele has won numerous awards: the Romanian Humorists’ Association Award for Interpretation (1993) for The Flea, the Prize for Directing at the Romanian Comedy Festival (1994) and the Special Prize of the Jury at the National Festival of Contemporary Theatre (Brasov, 1996), Award for Best Stage Play at the National Comedy Festival for the show Money from Heaven (Galati, 2001). At the 8th edition of the Romanian Comedy Festival “festCO 2010”, Horatiu Malaele received the Best Actor In a Leading Role’ Award for the role of the Professor in the Eugene Ionesco’s Lesson and the Best Director Award for the same spectacle. The actor’s record includes two UNITER Awards: Best Actor in 1992 for the role of Lelio in the play The Liar, played on the stage of the Odeon Theatre and Best Actor in 1998, for the role of K. Mueller in The Revolver, a theatrical production of Nottara Theatre.

He also played in several movies, such as: Divorce… Out of Love, This Lament, The Bastards, Amen, Morometii etc. In 2012, the actor was awarded with the Excellence Award for the Entire Career at the “Comedy Cluj” International Film Festival. In the same year, the beloved actor received a star on the Celebrity Alley in Time Square from Bucharest.

He published the book Horatiu about Malaele (2002), which includes texts, photographs, graphics reproductions that reflect the artist’ s life and his creative activities. He is also the author of the volumes A story with Horatiu and Wanderings. As cartoonist and graphic designer, Horatiu Malaele had dozens of national and international exhibitions (in Munich, Paris, Venice, San Francisco, Montevideo etc.), and published thousands of cartoons and drawings.

Marcel Iures, born on August 2nd, 1951, graduated from the Institute of Theatre and Film in Bucharest, in 1978, and was distinguished by talent and stage presence.

Between 1978 and 1980 he worked at the Cluj-Napoca National Theatre, and after 1980 he performed on the stages of the Bulandra and Odeon Theatres, in Bucharest.

On stage, he distinguishes himself in plays such as Romeo and Juliet, As you like it, Hamlet, Richard III, A Stormy Night, or in the leading role from Caligula.

His cinematographic performance is an important one, the actor creating unforgettable roles in the Carpathian Castle, To Die Wounded by Love for Life, Miss Aurica, The Oak, Keep an eye on happiness, Amen, The Phantom Father, 3 pazeste.

His talent helped him to conquer Hollywood, co-starring with celebrities of the American cinema: with Tom Cruise in Mission Impossible, with Nicole Kidman and George Clooney in The Peacemaker, and with Bruce Willis and Colin Farrell in Hart’s War.

Throughout his career, he has been rewarded with many awards: The Best Actor in Leading Role Award (UNITER Gala Awards in 1999 and 2002), The Excellence Award (UNITER Gala Awards in 2004), The Trophy for the Most Important Personality of the Romanian Theatre (offered by Tofan Foundation for Theatre and Film in 2001), the Flacara Grand Prize (at a Gala organized by the National Theatre Bucharest, in November, 2008).

In 1995, Marcel Iures founded the Cultural and Artistic Foundation ACT Theatre, the first independent cultural and artistic institution from Romania, having its own multipurpose hall, designed for theater, music and dance performances, and for film and exhibitions. The hall was opened to public in September, 1998.

In 2012, at the ceremony of awarding the Romanian Oscar trophies – for excellence, Marcel Iures was among the personalities with remarkable results in various fields of activity who were awarded such a trophy – a gold-plated metal statuette, a modified version of the famous American Oscar.

We thank all the actors for their assistance in the accomplishment of this postage stamp issue and we send them all our admiration and gratitude for everything they have achieved in theatre and cinema, as well as for the promotion of Romania’s cultural values world-wide. 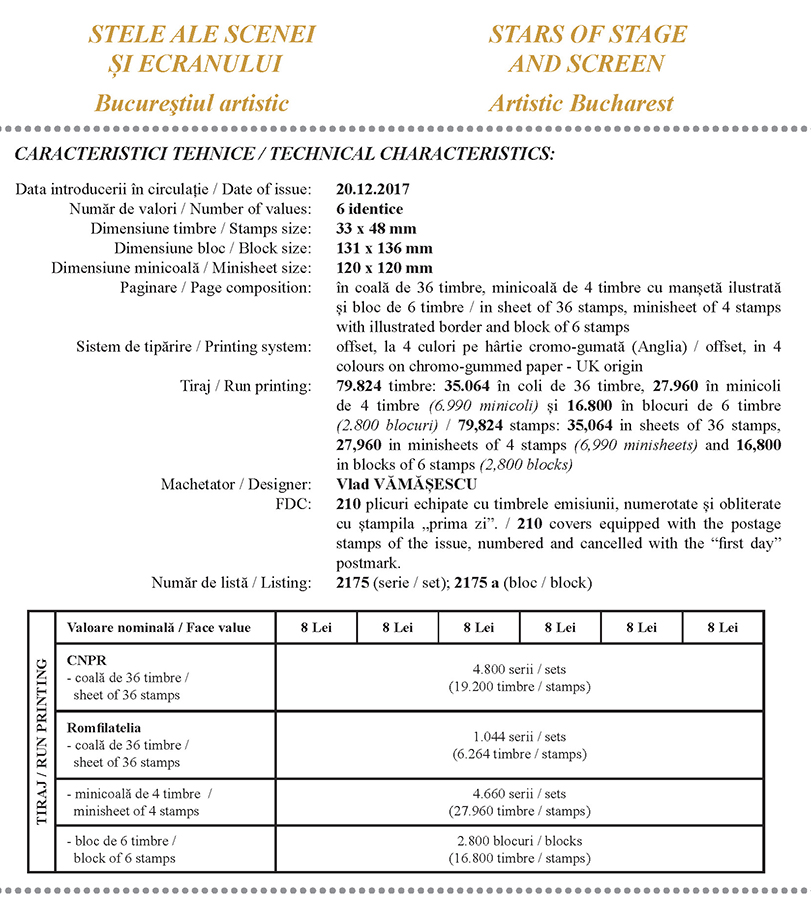