The stamp and the coin are often partners in Romania’s promotion campaigns, developed nationally and internationally, both representing national emblems and having a joint role, to treasure, for posterity, the values and symbols that shape the Romanian spirit.

Therefore, on the occasion of this beautiful anniversary of the national coin and the institution that oversees its long journey, the Romanian philately answers positive to this moment, through a special postage stamp issue.

Knowing several stages of development and organization, the Romanian Mint marks in 2015 almost a century and a half of experience, with an unquestionable cultural, social and financial value and importance. The coins and other products manufactured in the Mint (jewelry, religious objects, badges, decorations, etc.) are, like stamps, the bearers of meanings and symbols, history and culture.

Thus, Romfilatelia dedicates the philatelic issue 145 years since the inauguration of the Romanian Mint to the celebration of this fundamental national institution, one of the oldest of our state, the place where the coin is minted even nowadays.

The postage stamp of the issue with the face value of lei 8.10 reproduces the image of the 1870’s first building of the Romanian Mint, along with the reverse image of the first 1 leu coin, a silver coin issued by the Mint in the same year, 1870, and included within the stamp graphics in a special perforation.

The stamp of the souvenir sheet, having the face value of lei 14.50, presents the first golden coin of 20 lei, issued by the Romanian Mint in 1870 while the margin illustrates the effigy of King Carol I, the Romanian Mint being inaugurated in his presence, on February 24, 1870.

On this anniversary, Romfilatelia makes available to collectors and the general public a valuable
philatelic-numismatic product, created into a limited edition of 430 copies – the silver souvenir sheet with
gold plated stamp, which reproduces the first gold coin issued by the Romanian Mint in 1870. The silver perforated souvenir sheet is an exclusive product, based on an original concept of Romfilatelia, a replica of the issue’s
souvenir sheet, whose gold plated stamp is actually a first because of the perforation made in a precious metal. The product is inserted in an elegant box, on whose interior lid is placed the philatelic booklet containing the “complete series” block of stamps (the stamp of the issue and the stamp of the souvenir sheet) and the certificate of authenticity, numbered from 001 to 430, together with the silver souvenir sheet with gold plated stamp, replica of the philatelic product with the face value of lei 14.50.

Starting with Tuesday, May 19, 2015, the postage stamp issue 145 years since the inauguration of the
Romanian Mint will be available in all Romfilatelia shops in Bucharest and countrywide. 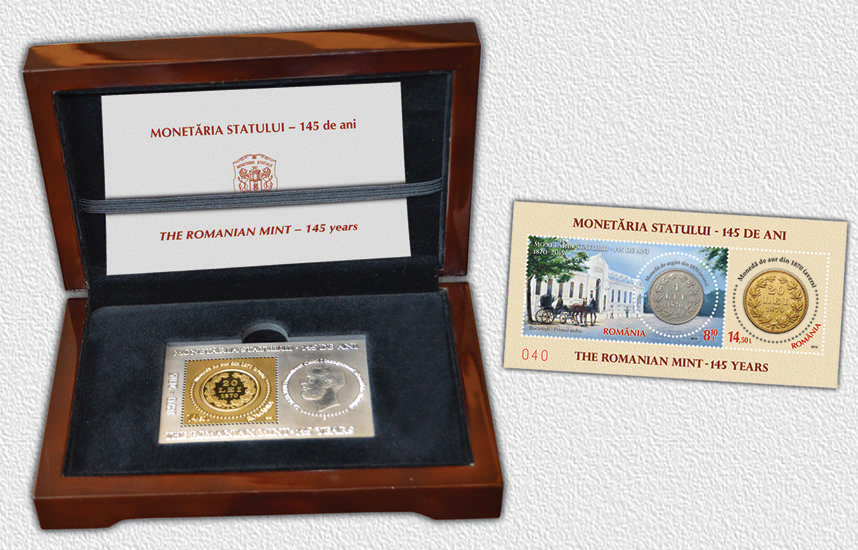