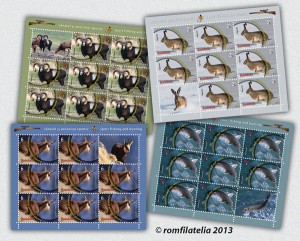 Due to its geographical position, its various existing landforms and the climatic influences in the area,Romaniahas a large biodiversity of animal and vegetal species.

The country’s natural habitats are reservations recognized acrossEurope, which contain, in considerable densities, species of large and medium predators, aquatic ones, as well as a great variety of migrating birds, which are rarely encountered or on the verge of extinction in other places.

Fauna’s biodiversity preservation and the perpetuation of a healthy balance between different species, as well as between them and their environment, represent the object and goal of many and various trades, specialities and activities, among which sport hunting can be mentioned. This is defined as a rational activity carried out to maintain the natural balance by exploiting, in a sustainable manner, a renewable natural resource. Sport hunting, carried out to maintain the agro-forest-cynegetic balance within the limits of the sustainable population growth, is subject to the approval and control of central public authorities in charge of hunting and the environment. Hunting implies multiple knowledge about the nature, the prey and the hunting technique, but also qualities such as reason and inspiration, physical features and passion, self-education and self-control, talent and experience.

Fishing, practiced as an organized form of food procurement or an exchange of products, has always been one of the main activities of the Romanian population. Besides being a complex activity, fishing is also a way of relaxation and a hobby. Almost one century ago, the great scholar Grigore Antipa described fishing as follows:

“… one of the favourite occupations of our nation. For this purpose, Romanians invented all sorts of instruments – from the most rudimentary up to the most sophisticated ones – to catch fish; though people used to make it not only to procure their daily meal, but especially because it was their favorite way of having fun… I think I need not to prove how important and educational is for a state to find and cultivate such means of moral entertainment which bind the humans more tightly to the nature and make them love their country even more”.

Romfilatelia introduces into circulation the Sport fishing and hunting postage stamps issue containing 4 stamps, which represent images of the following species: the chamois, the European hare, the mouflon and the trout.

The chamois can be mainly seen in rocky regions and alpine bare areas in the Carpathians, descending to forested areas in winter. Highly sensitive to temperature changes, the chamois is in the habit of choosing its place of living according to weather. It is a vigilant animal, endowed with highly developed hearing and smell, being also capable to perceive movement at long distances. It has an exclusively diurnal activity. When in danger or warned by other peers, the chamois quickly withdraws in the least accessible places by making leaps of up to 2 meters high and 6 meters long.

The European hare lives on the entire territory of our country, preferring the wide, fertile, alternatively seeded plains, so that it can also enjoy thorn bush areas or small brushwood. The European hare is a lonely animal accustomed to its living grounds, that does not move too far away from its birth place. It has mainly nocturnal activity. During the day it rests in holes dug into the ground, among the roots of trees or briers, in ploughed areas and generally in places protected against the wind.

The mouflon is the only representative of wild sheep from Europe, being brought toRomania in the interwar period. The mouflon prefers hill areas with an altitude between 300 and 500 m, where there are meadows near forests. With its short legs, it can not move through high snow in winter, and thus it withdraws into valleys and on the southern slopes, which are less snowy.

The trout can be found in mountain rivers, being very choosy in terms of environmental conditions and needing cool, clear and rich in oxygen waters, with temperatures below 17-18°C. Its favourite places to rest and hunt are the hiding places between banks, the hollows between rocks and stones and the places under the tree roots on the banks of rivers.

We thank the management of “Grigore Antipa” National Museum of Natural History and the General Association of Sport Fishermen and Hunters of Romania (AGVPS) for their support granted in the accomplishment of this postage stamps issue. 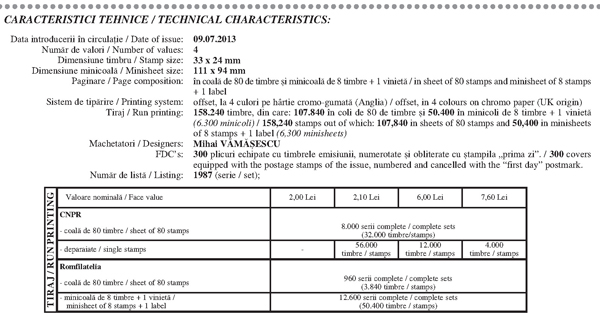