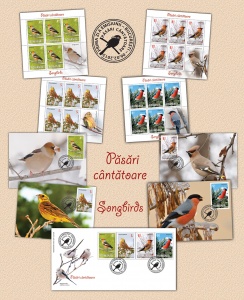 Romfilatelia proposes to bird lovers and philatelists a special postage stamp issue illustrating Songbirds. Also called Oscines (from the Latin word oscen meaning songbird), these were assigned by ornithologists to the order Passeriformes, being characterised by the diversity of size and plumage.
The Hawfinch (Coccothraustes coccothraustes) is a small bird with an 18 cm long, strong and stocky body, and is illustrated on the stamp with the face value of lei 4.50.
The beak is large, thick, with strong curved edges.
The forehead, crown and sides of the head are yellow-brown, the neck is black, the body being a mixture of chocolate-brown, chestnut, white and grey.
The land of the Hawfinch is the temperate European countries and neighbouring regions of Asia.
Because of its heavy flight, it is often found in the foliage of trees that serve as a hiding place for it.
The Hawfinch preferably consumes seeds with strong crust (cherries, sour cherries, etc).
In our country, the Hawfinch is a sedentary bird, very common, which hatches in all the lowland light forests.
Its song consists of sharp tones or hissing issued for hours and accompanied by body movements.
The Yellowhammer (Emberiza citrinella) is illustrated on the stamp with the face value of lei 5.00. It is spread almost all over Eurasia, the species in our country preferring open habitats. Its predominant plumage colours are yellow and brown. Yellow covers the head and belly, while the wings and back also present various shades of brown. The bird has a body length of 16 cm, the wingspan is 23-29 cm and it weighs 25-30 g.
It builds the nest on the ground, in tall grass or low bushes.
The food consists mainly of seeds they eat directly from the ground.
The song consists of a series of 5 to 8 high trills, rapidly repeated.
On the stamp with the face value of lei 8.10 is reproduced the image of the Bohemian Waxwing (Bombycilla garrulus) that nests in coniferous forests of the Northern parts of Europe, Asia and America. In our country, it is an irregular winter visitor, appearing in small or large flocks.
Its plumage is silky, a feature that also gives the bird its popular name. Moreover, its Latin name – Bombycilla garrulus – is composed of Bombux (silk) and Cilla (tail). The adjective Źgarrulous alludes to the fact that it is a garrulous bird. It has a body length of between 16 and 20 cm and a wingspan of 30-36 cm. The dominant colour is grey, while its forehead and sides of the head are brown.  It lives in bushes and trees, feeding on insects.
The song is slow, resembling a chirp; it is heard especially in summer and cannot be compared with a special chirp as the Bohemian Waxwing emits sparse sounds.
On the stamp with the face value of lei 9.10 is depicted the Eurasian Bullfinch (Pyrrhula pyrrhula), a small passerine bird, spread throughout Europe, except for the cold areas. In Romania, it is met in mountainous forests, going down to valleys in cold winters.
The male has a colourful plumage, its head, wings and tail tip being black and its back being dark grey. The throat and breast are brick-red, and the sub-tail area is white. The eyes are small and black, and the beak is short, strong and black. The legs are thin and short; the tail and wings are black with a white cross stripe. The Eurasian Bullfinch has a length of 15 cm, a wingspan of 22-26 cm and a weight of 21-27 g.
The Eurasian Bullfinch feeds with various seeds, buds of trees and shrubs, and rarely with insects. Eurasian Bullfinch makes its cup shaped nest in trees or bushes.
The song is slightly noisy, slow, consisting of whistles and some alternating harsh sounds.
The Long-tailed Tit (Aegithalos caudatus), reproduced on the first day cover, is a little sedentary bird of great beauty. It lives in deciduous and mixed forests, but its also present in parks, gardens and orchards. The Long-tailed Tit is spread throughout the entire Europe.
Its dominant colour is white with shades of pink and scarlet. The neck is black, as well as the wingtips and the tail. We can also see two white feathers on each side of the tail. The body length is 15 cm, the wingspan measures 16-19 cm and it weighs 7-9 g.
The food of the Long-tailed Tit consists mainly of small insects.

Romfilatelia thanks the Institute of Biology of the Romanian Academy and the photographers Bogdan Ciungara, Cristian Mihai and Daniel Petrescu for the documentary and photographic support granted for the achievement of this postage stamp issue. 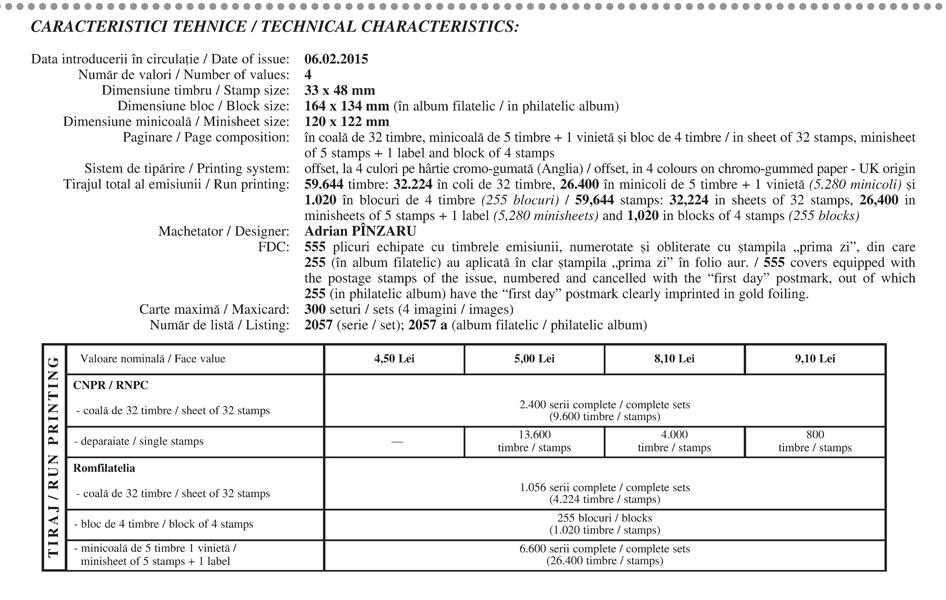