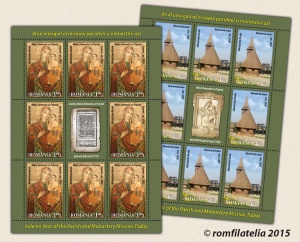 The Holy Synod of the Romanian Orthodox Church declared 2015 as the Solemn Year of the Parish and Monastery Mission Today.
To pay homage to this event in particular, Romfilatelia dedicates a postage stamp issue to the Nicula Monastery and to the pilgrimage to the miraculous icon of the Virgin Mary located in this holy place.
An ancient hearth for the Romanian Orthodox spirituality, this monastery is known as one of the oldest monastic settlements in the Romanian space.
The first historical evidence attesting the monastic establishment is related to the presence of a wooden church, built in the Maramures style, dedicated to the Holy Trinity, dating from 1552.
The icon of the Virgin and Child, to which many people come in pilgrimage, was painted in 1681 by Father Luca, from the town of Iclod.
In 1694, the village of Nicula became the property of several small Romanian local nobles. One of them, Ioan Cupsa, would buy from Father Luca the icon of the Virgin Mary. The icon was meant for his community church and would later be entrusted to the monastery on the hill.
In an official report summarizing the results of the investigation initiated by the authorities of the time, it was noted: the icon of the Virgin Mary with Child, found today at Nicula, has wept continuously between February 15th and March 12th, 1699. Thus was born one of the most spectacular phenomena of the Transylvanian culture and spirituality, the pilgrimage to the Nicula Monastery.
Between the years 1712-1714, the wooden church was restored, serving as a place of worship until 1973, when it was destroyed by a fire. It was replaced with another old oak church dating from the17thcentury which was brought in from the village of Nasal Fanate. This place of worship is still venerated today by the many faithful who circle around the church on their elbows and knees, praying devoutly to the Virgin.
Alongside the wooden church can be found a large brick and stone church, built between the years 1875-1879 which is dedicated to the Assumption of the Virgin Mary. The iconostasis which adorns the church was carved in linden wood by craftsman Samuil Kerestesiu, in1938 and has at its center the miraculous icon. Both the fact that it hosts the miraculous icon, as well as its solar shape iconostasis of rare beauty, turn this place into a unique one in the Orthodox East.
Nicula Monastery is today the largest pilgrimage center in Romania. Long convoys of believers from all over the country head towards it every day, on Sundays and holidays, but especially during a loved feast of the Romanian people, the Assumption of the Virgin Mary, also called St. Mary the Great, celebrated on August 15th (recognized as a national holiday by the Romanian State).
On the eve of the feast, for several days, the faithful from all over the country but also from beyond, keep watch all night with lit candles, singing hymns of praise, to meet the greatest feast day of the Virgin Mary, the church and the feast of the miraculous icon.
The icon was, throughout the centuries, the protector and healer of the Romanian Christians as well as people of other faiths, who truly believed in the miraculous powers of the Holy Mother.
Some of its reproductions are found in the monasterys Museum which is endowed with a rich collection of icons on glass from the Nicula, Alba Iulia, Fagaras, Scheii Brasov areas, as well as Somes area icons on wood, but also from other parts of Transylvania, dating from the 17th and 18th centuries.
One of the icons on wood of the Virgin and Child, dating from the same period as the miraculous icon painted by Father Luca, as well the wooden church, was brought in from the Ceaca parish, in the County of Salaj. Dated stylistically to the late 17thcentury and possibly painted by the same author as the miraculous icon, it was restored by the painter Andras of Cluj, in the late 18th century (the faces and hands of the Virgin and Baby Jesus were repainted, next to the floral ornaments on the throne of the Virgin).
Another important copy of the Virgin and Child icon is a bas-relief in stone dating from the year 1700. The bas-relief is exhibited in the monasterys museum, but is part of the Dej Municipal Museums heritage and represents the truest replica of the miraculous icon of the Virgin Mary.
An engraving of the miraculous icon was printed in the Blaj Breviary of 1751 and is a document of paramount importance related to the history of the icon from Nicula, with the accompanying caption: the Icon of the Most Holy Mother of God, Who wept in Ardeal, at the Holy Monastery of Nicula, in 1699, February 4th/15th.
All icons are miraculous and helpful to the believer, but the Nicula icon of the Virgin Mary in particular brought people together, both through the many miracles and healings that have occurred there, as well as through the wonderful tears it miraculously shed more than once.
The miracles accomplished by the Icon of the Virgin Mary from the Nicula Monastery, cultivate into the souls of the faithful who come to the pilgrimage feelings of closeness and devotion to it, but also strong feelings that all men are sons of the Virgin Mary.
The stamp with the face value of lei 1.00 illustrates the wooden icon of the Virgin Mary with Child (17th century) and the stamp with the face value of lei 4.50 illustrates the image of the wooden church from the Nicula Monastery.

Romfilatelia thanks His Grace Andrei Andreicut, Archbishop of Vad, Feleac and Cluj and Metropolitan of Cluj, Maramures and Salaj, Archimandrite Nicolae Moldovan, abbot of the Nicula Monastery, Cluj county, The Dej Municipal Museum and Father Siluan Timbus for their support in the achievement of this postage stamp issue. 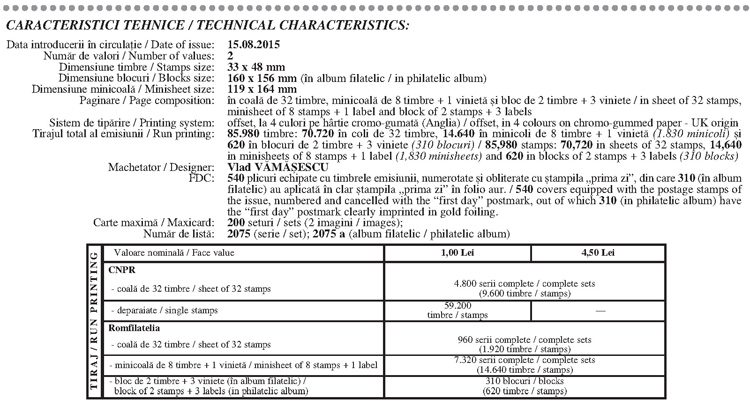