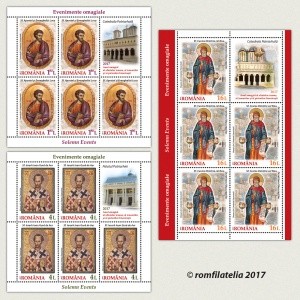 The Holy Synod of the Romanian Orthodox Church at the initiative of His Beatitude Patriarch Daniel and in the context of the 1230th anniversary of the 7th Ecumenical Synod of Nicaea (787) which approved the cult of holy icons, have declared 2017, the Solemn Year of Holy Icons, Iconographers and Church Painters and Commemorative Year of Patriarch Justinian and of the Defenders of Orthodoxy during Communism.

The Patriarchal Cathedral, situated on the hearth of the monastery of the “Holy Emperors Constantine and Helen”, founded by the voivode Constantin Voda Serban (1654-1658) and his wife, Balasa, a historical monument and landmark of the Romanian Orthodoxy, houses an impressive collection of icons.

The Saint Demetrius the New was born in the village of Basarabi (Bulgaria). He was initially a shepherd, and later took up the monk’s coat at a monastery set in a cave not far from his hometown. Three years after his death, people discovered his entire body which shone with the grace of the Holy Spirit, after a flood. Brought to Bucharest on July 13, 1774, by Metropolitan Grigorie II (1760-1787), the relics of Saint Demetrius the New, housed in a wonderful silver casket, have inspired many miracles.

Another icon of the iconostasis of the Patriarchal Cathedral represents the Apostle and the Evangelist Luke.

The Palace of Patriarchy, an architectural masterpiece of Bucharest, houses a valuable collection of icons. Built at the beginning of the 20th century by the Romanian State according to the plans of the architect Dimitrie Maimarolu, it is the first work cast in reinforced concrete in the country.

Born around 354, Saint John Chrysostom recalled in 368. His work is one of the richest and most holy of universal literature, containing treaties, homilies, catechesis, biblical comments, speeches, epistles, and cult books, almost entirely preserved. The icon, hosted by the Patriarchal Palace, is made in a mosaic and depicts Saint John Chrysostom as he was described in the writings of the time: a pleasant face, but weakened by fasting and suffering, drawn cheeks, high forehead, free and prominent, bald head, flat face, bearded, with deep penetrating and agile eyes.

In the context of the Solemn Year of Holy Icons, Iconographers and Church Painters, and the celebration of Saint Demetrius the New, Protector of Bucharest, on October 27, Romfilatelia introduces the postage stamp issue called Solemn Events.

The icon of the Apostle Luke the Evangelist in the Patriarchal Cathedral is illustrated on the stamp with the face value of Lei 1.80.

The stamp with the face value of Lei 4 represents the icon of Saint Hierarch John Chrysostom, exhibited in the Patriarchal Palace.

The stamp with the face value of Lei 16 illustrates the icon of Saint Demetrius the New, Protector of Bucharest, on a mosaic, which is part of Patriarchal Cathedral patrimony. The icon watches the shrine with its holy relics.

Romfilatelia thanks His Beatitude Daniel, the Patriarch of the Romanian Orthodox Church, the Archdiocese of Bucharest, the representatives of the Patriarchal Cathedral and the Patriarchal Palace, and the Lumina newspaper for the documentary and photographic support given to this postage stamp issue. 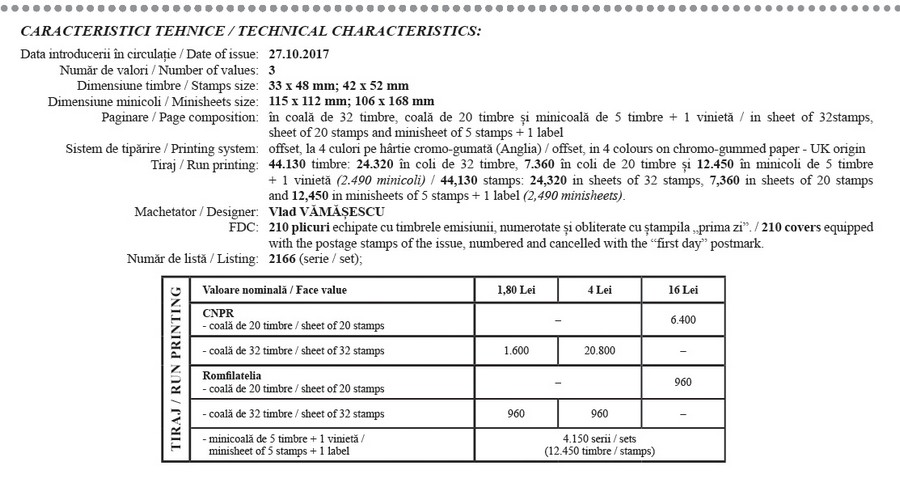