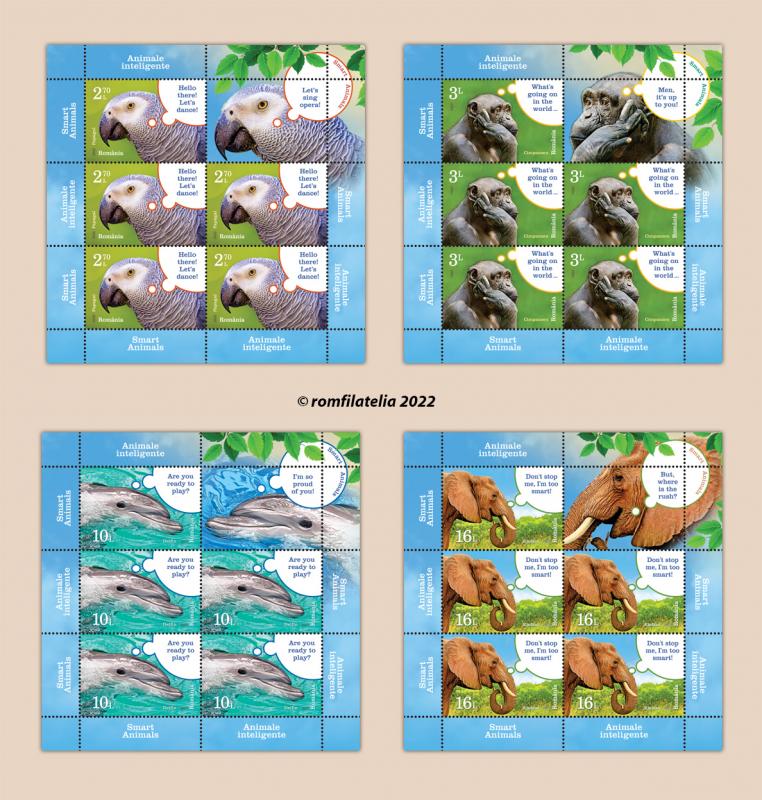 Romfilatelia has included in a philatelic theme a new issue to draw attention to the obligation to preserve the environment in which animal species having noticeable native intelligence live.

The issue with the generic title “Smart animals”, consisting of four stamps, four minisheets, a First Day Cover and a special philatelic folder for collectors, will enter into circulation on Wednesday 6 July, this year.

Within the stamps of the issue, the following species are illustrated: the chimpanzee, the dolphin, the elephant and the parrot. The First Day Cover features an image of a sea lion.

On the stamp with the face value of Lei 2.70, is depicted the parrot, often preferred as a pet for its intelligence, thanks to which it understands and adapts to the environment, acquiring new skills. The most valued remains the ability to memorise and reproduce human speech, thanks to the developed cognitive skills, some species being able to remember hundreds of words and even associate them with objects that the parrot recognises distinctly, being capable to understand concepts such as shape, number and colour.

On the stamp with the face value of Lei 3.00, is illustrated the chimpanzee, which proves its intelligence through its ability to communicate and understand, being able to learn sign language and the use of many tools, surpassing the skill of any other animal on the planet. Uses body language, facial expressions, clapping and kissing to communicate within the community. Considered the noisiest wild animal, it has a sophisticated sound system for communication. Man’s closest relative, the chimpanzee remains under researchers’ scrutiny to better assess its intelligence, behaviour and actions.

The dolphin, represented on the stamp with the face value of Lei 10, performs difficult tasks, learns from experience and passes on knowledge to others in the group. It is very sociable and has a complex communication system based on its characteristic sounds. Dolphins address each other with different sounds to identify each other with their own distinctive code. Social play, mutual cooperation, caring for each other’s offspring and passing on hunting strategies have been seen as signs of complex behaviour.

The elephant, illustrated on the stamp with the face value of Lei 16.00, lives in herds, with a matriarchal way of organisation. The elephants communicate with each other and can identify each other from three kilometres away. The large number of synapses in its cerebral cortex allows the elephant to understand non-verbal language, but one of the most remarkable expressions of its intelligence is its ability to tackle new challenges and adapt, achieving a radical change in behaviour to cope with adverse situations. Its specific memory is due to a large and complex hippocampus, whose main function is associated with processing certain types of memory, mainly spatial.

The sea lion, depicted on the First Day Cover, is a highly skilled and intelligent animal, playful, responsive and with the ability to learn tricks. It is well known for shows with trainers, but has also been trained for various aquatic activities. When hunting, it may ally with dolphins or birds when encountering large schools of fish, and in areas where salmon are found, especially at river mouths, sea lions stalk their prey. Its name comes from the roar of the male in order to protect its territory. 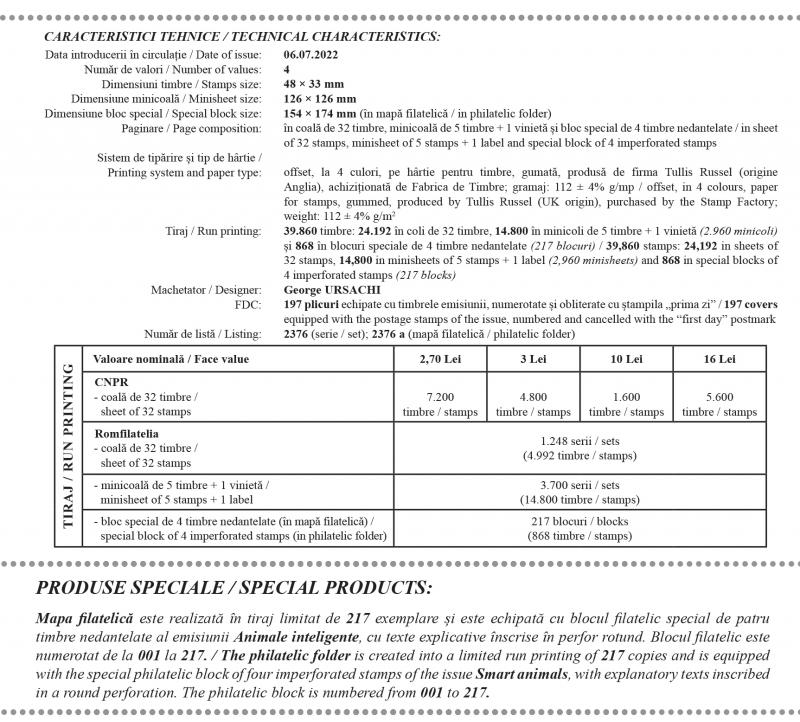