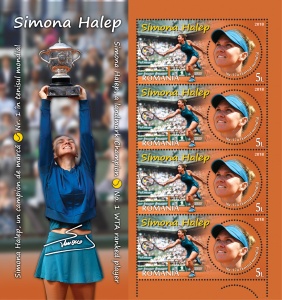 To honour the performance of a great tennis player, Romfilatelia introduces into circulation the postage stamp issue Simona Halep, a landmark Champion. The stamp of the issue reproduces a sequence from a match played by Simona Halep, and the perforated souvenir sheet illustrates the moment of the triumphant rise of the Roland Garros trophy.

Simona, WTA number 1 ranked player, conquers Paris and wins the first Grand Slam tournament from her professional career, 40 years away from the success of another Romanian female player, Virginia Ruzici, and 10 years after winning the competition for juniors, defeating, in a fantastic match, American Sloane Stephens with score 3-6, 6-4, 6-1.

She made her debut in international competitions in 2008, when she managed to win the juniors tournament in Italy and the Roland Garros dedicated to junior players, in a 100% Romanian final, defeating Ana Bogdan. The tournament in Kristinehamn (Sweden) followed, as well as the doubles within the Futures women’s tournament in Bucharest, alongside Ionela-Andreea Iova.

Simona represented Romania in 17 team meetings at the Federation Cup, where she was first selected in 2010, disputing 27 single and double matches. In 2016, she was one step away from the Fed Cup Semifinal, along with the Romanian team.

After another three Grand Slam finals – two at Roland Garros (2014, 2017) and one at the Australian Open (2018), Simona Halep won the Roland Garros Grand Slam Tournament (June 9th, 2018), becoming the most important trophy of her career until that time.

The Romanian Olympic and Sports Committee (ROSC) awarded Simona Halep, in January 2015, the title of “Sportsman of the Year” for the outstanding results achieved in 2014. In 2014, the Romanian tennis player was third in the ranking of the best athletes in the Balkans, prepared by the BTA Bulgarian agency.

Also, Simona Halep has been nominated, for consecutive two years, namely in 2014 and 2015, by WTA, the most popular player, her player account being the most “accessed” on the women’s professional circuit website, wtatennis.com. In recognition and appreciation of her sporting performances, Halep was appointed honorary citizen of the cities of Constanta and Busteni in 2014, and of the city of Bucharest, the Capital of Romania, in 2018.

The new issue will be available on Wednesday, August 29th, 2018, in Romfilatelia’ own shops network in Bucharest, Bacau, Brașov, Cluj-Napoca, Iași and Timișoara and online on https://romfilatelia.ro/store/. The postage stamp issue is completed by a First Day Cover and a maxicards, as page composition there were used a sheet of 14 stamps, minisheet of 4 stamps with illustrated border and perforated souvenir sheet 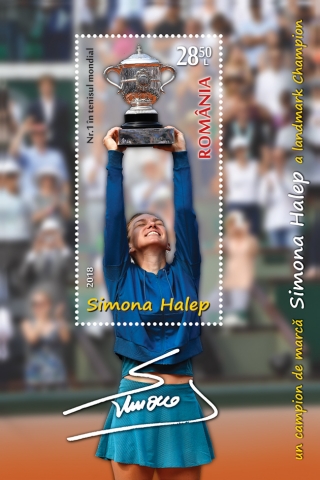 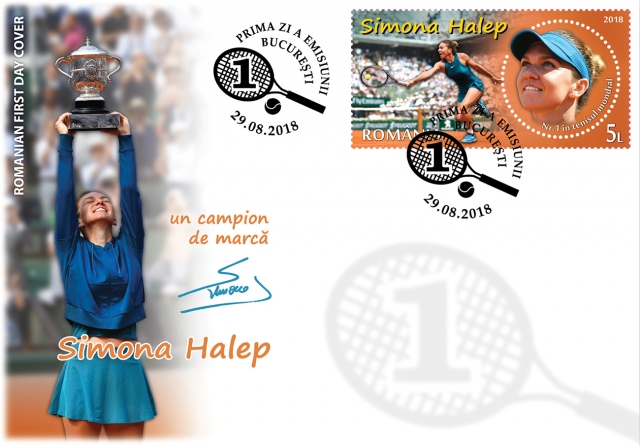 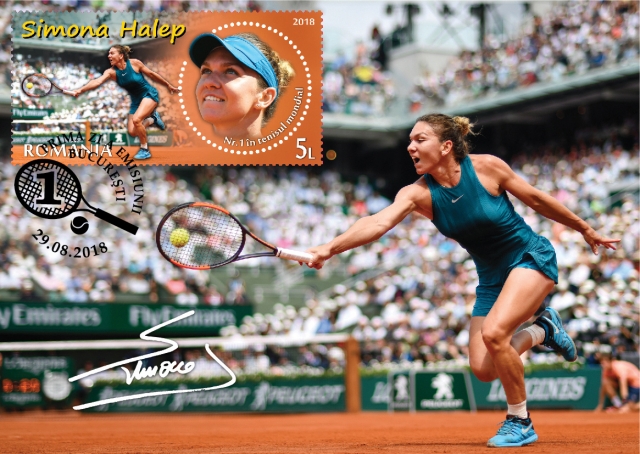 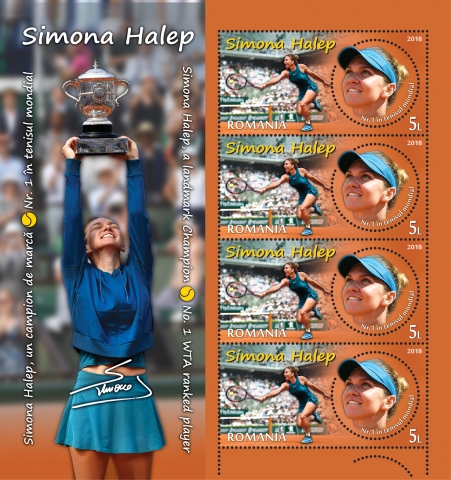 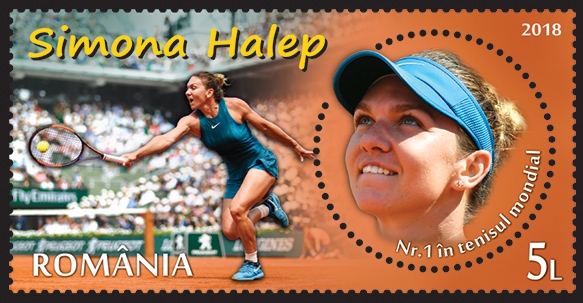