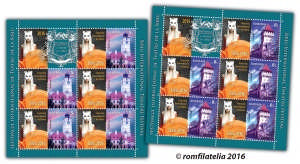 Through this postage stamp issue, dedicated to the cultural manifestation, the stamp once again certifies its role as ambassador of culture in the world.

In 1993, a group of the “Radu Stanca” Theatre of Sibiu had the initiative to revive the city’s lost sparkle by organizing a theatre festival, aided by Romanian cultural personalities and theatre personalities from Romania and abroad. The first edition of 1993 took place in that March, in a late winter with mounds of snow, and for many, who hadn’t seen snow except in movies, Romania seemed a fascinating country. On the first edition the attending guests wore garlic in their pockets to ward off vampires.

In the spring of 1994, the ambitious “Festival of Young Professional Theatre” would start in the first theatre auditorium of central Europe, built 400 years previous.

The Sibiu Festival of Young Professional Theatre was the occasion on which to see the plays of the most important theatres in the country. All the shows of the first Sibiu Festival were free. Many people crowded the entrances where astonished porters were trying to keep up with a public thirsty for culture.

The festival gained continuity; it achieved notoriety from America to Japan, to later become an institution with increasingly better defined persona and structure.

If the first edition was attended by representatives from only 2 countries (Romania and Moldavia), in 2000, on its 7th edition, the festival attracted a record number of participants from 54 countries.

The year 2007 marked an exceptional edition of the festival as recognition of the contribution this event brought Sibiu in achieving the title of European Capital of Culture together with Luxembourg.

2008 – 2012 marks a period of maturity for the Sibiu International Theatre Festival as a meeting place of excellence in the performance arts. For the first time in the history of a Romanian festival, a new section of patrimony was inaugurated, which capitalizes the most representative productions from the Romanian space.

Each edition of the festival takes place under generous themes around which the artistic planning is made. The 23rd edition of the Sibiu International Theatre Festival has the slogan Building trust as a motto and will take place during June 10-19, 2016.

The festival is structured into 16 sections: theatre performances, contemporary dance, street performances, circus shows, theatre and circus performances in fortresses and historical sites, world music shows, flamenco shows, the theatre school reunion, visual arts platform, spoken word shows and radio theatre, conferences and seminaries, book launches, movies, work-shops, the performance market and meeting of cultural networks. 452 performances take place in 67 play spaces, along the 10 days of the festival, for 65.000 spectators, who have the occasion to experiment with the creative side. The purpose of the festival is to actively grow the community through culture, consolidating the interaction among different groups from the cultural community and the wider audience.

The two stamps of the issue refer to the graphic elements of the festival’s poster (the masked character) and also to the symbols or Sibiu’s architecture (Council Tower, Potter’s Tower).

Romfilatelia thanks the organizers of the Sibiu International Theatre Festival and photographer George Avanu for the documentary support granted in the creation of this postage stamp issue. 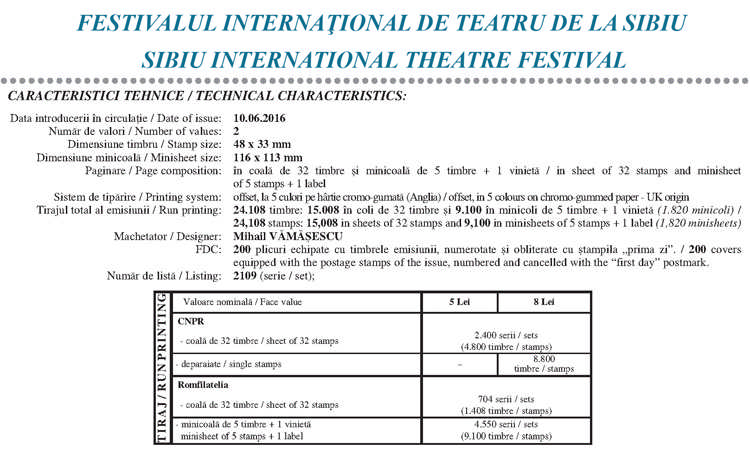