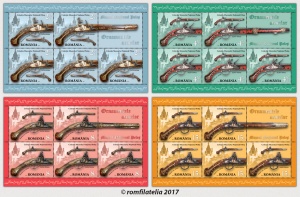 The history of human kind can be written in various manners. We can talk about human evolution in terms of how it was evolved the way of living, building, speaking, expanding and improving working tools, mundane objects or even fighting weapons.

As from the natural interest of men for beauty, class, originality and creativity, Romfilatelia offers to postal marks lovers a new exceptional issue under the title: Weapons’ Ornaments.

The four value of this issue are available starting on Friday, March 24th, 2017, in Romfilatelia’s stores in Bucharest, Bacau, Brasov, Cluj-Napoca, Iasi and Timisoara.

This philatelic project brings to the attention of the philatelists a few images of old firearms, from several parts of the world.

All these objects represented on the stamps of the current philatelic issue belong to the National Peles Museum’s heritage.

On the stamp with the face value of Lei 2.50, is illustrated a Persian origin gun from the first half of the 18th century. The gun has a length of 46,5 cm and 15 mm calibre and it is made of combination of three materials: steel, silver and wood.

The stamp with the face value of Lei 4.50 reproduces the image of a flintlock pistol of Italian origin from the first half of the 18 th century. It has a length of 54,5 cm and 16 mm calibre. The steel that this gun was made of was engraved, silver plated and gilded. Moreover, it is enriched with cut polished wood and carved coral.

A flintlock pistol of Turkish origin from the first half of the 18th century, with a length of 50,5 cm and 15 mm calibre is represented on the stamp with the face value of Lei 8. This piece is made of three different materials, too: steel, wood and silver.

The stamp with the face value of Lei 15 depicts another Turkish origin pistol from the first half of the 18th century, with a length of 49, 5 cm and 16 mm calibre. This gun is also made from an artistic and original combination of steel, wood, silver and brass.

Visually, the elements of this issue are composed form the images of these pieces of art, presented in attractive chromatics, having on the background the image of the National Peles Museum.

This issue is completed by a set of two first day covers and as page composition the sheet of 20 stamps, the minisheet of 5 stamps + 1 label were used.

Romfilatelia thanks the National Peles Museum for the documentary support granted in the creation of this postage stamp issue.