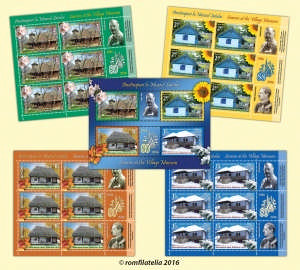 On the lakeside of Herastrau, in the middle of the Romanian capital, visitors from everywhere have the joy of meeting a genuine village, with monuments and artifacts from the 17th century, until the early 20th century, where representative constructions from important ethnographic regions gained a new life in the “Dimitrie Gusti” National Village Museum.

The Village Museum was created in 1936 at the initiative of Professor Dimitrie Gusti being one of first ethnographic museums in the world.

The postage stamps issue Seasons at the Village Museum, which Romfilatelia introduces into circulation, illustrates images of monuments in every season of the year.

For each house a season was selected and for every season a story was chosen.

Romfilatelia invites you on a journey through the four seasons, back in time, in childhood, on the village alleys, to enjoy the green of the spring, to rest on the house porch in the middle of summer, to reap the fruits of autumn and to sing Christmas carols in winter.

The stamp with the face value of lei 2.00 reproduces the image of the „Sfintii Voievozi” Church from the Rapciuni village, Neamt county, which entered into the „Dimitrie Gusti” National Village Museum’s collection in 1958.

The church was built in 1773, in the time of Prince Grigore Ghica, a date that was written in Cyrillic, on the entryway wooden door and on the narthex.

The artistic value of the church is completed by the mural painting, done in two stages: the simpler original painting and the painting from the North wall of the narthex.

The church is the place where all the important events from the village life were recorded. The Cyrillic inscriptions from the porch are very interesting because they are reminders of wetter winters and dry summers or unusual events such as, for example, the coming of the locusts in 1847.

The stamp with the face value of lei 2.40 reproduces the image of the Jurilovca Homestead from Tulcea County, 1898.

Jurilovca ensemble household is specific of the Lipova style, the local villagers dealing with fishing and viticulture.

The homestead, with all the annexes, was brought in the museum village in 1963, from Jurilovca, a place located on Razim lake.

The rooms interiors are characterized by the same polychrome aspect, from the presence of carpets, blankets and quilts made from pieces of industrial cloth, colored moldings of stoves, to folk painting on wood, glass or cardboard, crocheted curtains, furniture and fabrics.

The constructive style, the ornamental elements and the massive presence of fishing gear, make the Jurilovca household a valuable evidence of the life and work of a population that has found its second homeland in Romania.

The stamp with the face value of lei 8.00 reproduces the image of the Surdesti Homestead, Maramures, 18th century.

The homestead, which was transferred to the museum in 1967, dates back to the second half of the 18th century, originating from the Lapus area.

In line with the geographical environment and the historical evolution and according to the socio-economic conditions, the Surdesti village was developed as a diffuse type village which is representative for Romanian settlements in the hilly region.

The specific arrangement of the homestead – the shed with stable at the entrance, near the street, and the house which is located in the second part of the yard – enstills the household structure in the „double courtyard” type specific to pastoral-agrarian economy village.

The stamp with the face value of lei 15,00 reproduces the image of the Chiojdu-Mic Homestead, Buzau County, 18th century.

The house is built on a high foundation of river stone, in which the cellar and tool room are sheltered.

The walls of the house are made from round shape fir logs, with a small diameter, arranged in horizontal wreaths.

The four slope roof has a small shingle cladding in a fish scale pattern.

The main decorative elements, done by chopping and witling wood is seen on the beams, pillars and balustrade pavilion.

Romfilatelia thanks the “Dimitrie Gusti” National Village Museum for the documentary support granted in the creation of this postage stamps issue. 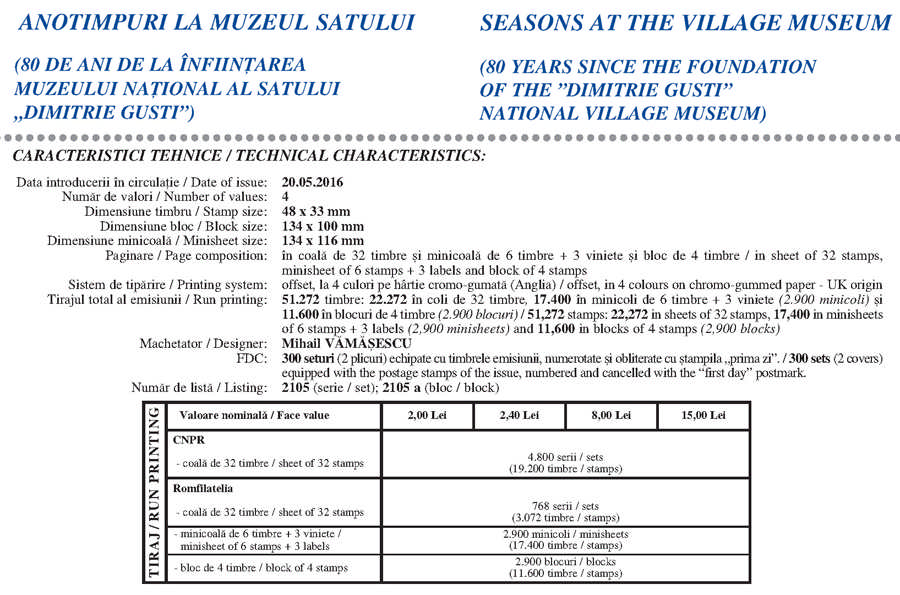