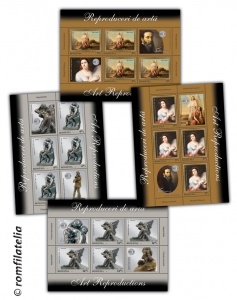 Romfilatelia continues the topics dedicated to the history of Royalty through the philtelic issue Royalty in Romania, the postage stamps issued on this occasion depicting the four royal couples in the history of the Romanian Monarchy.
The stamp with the face value of lei 3.10 illustrates King Carol I and Queen Elisabeta of Romania, together with their monograms. King Carol I was elected Ruler of the United Principalities on April 20th, 1866. The forefather of the Romanian Dynasty is also known as The Founder of many public institutions, laws and traditions. During his reign, Romanias independence was recognized, Dobrudja returned to the mother country (both in 1878) and the country was proclaimed a Kingdom (1881).
King Carols wife, Elisabeta of Wied, was born on December 29th, 1843, in Neuwied, the Duchy of Nassau.
Known under the literary and artistic pseudonym of Carmen Sylva, Queen Elisabeta wrote poems, plays, short stories, essays, and other works in Romanian, German, French and English. Personalities such as George Enescu, Elena Vacarescu, Nicolae Grigorescu and Vasile Alecsandri attended many cultural events organized by the Queen.
The stamp with the face value of lei 3.30 reproduces the images
of King Ferdinand I and Queen Marie of Romania, together with their monograms. King Ferdinand I, nephew to King Carol I, became King of Romania on October 10th, 1914.
Ferdinand bears the pseudonym The Unifier or The Loyal because during his reign the Great Union was accomplished (1918) and because he led Romania in World War I on the side of the Entente, despite his German origins. The crowning of the royal couple took place on October 15th, 1922, at Alba Iulia. Alongside Ferdinand was Queen Marie, known as Mother of Wounded for the help she gave soldiers on the battlefront during World War I. Modern, impressive, intelligent and independent, she supported culture and science, and cultivated relationships with the greatest political, spiritual and social figures of the world, bringing Romania to their attention.
The stamp with the face value of Lei 6.00 reproduces the portraits of King Carol II and Queen Mother Helen of Romania, together with their monograms. Carol II became one of the most controversial figures of modern history. The reign of Carol II included the peak of economic, social and cultural prosperity of Greater Romania, as a European power, but it was also the beginning of the disintegration of Romanian democracy. The wave of popular discontent led to the abdication of Carol II, but not before the -establishment, with his consent, of Antonescus dictatorship.
Queen Mother Helen of Romania became a leading figure in the modern history of Romania. She married the (then) Crown Prince Carol on March 10th, 1921, and after Carols renouncement of succession rights, the Parliament granted her the title of Princess of Romania in 1925 and, later on, Queen Mother. During the Antonescu dictatorship and the Second World War, she contributed effectively to the rescue of many Jewish -citizens, so that she was subsequently proclaimed Righteous Among the Nations by the Yad Vashem Holocaust Memorial. In 1948, she went into exile with her son, King Michael I.
The stamp with the face value of lei 14.50 presents Their Majesties King Michael I and Queen Anne of Romania, together with their monograms. Born on October 25th, 1921, in Sinaia, King Michael reigned for the first time between July 20th, 1927, and June 8th, 1930, under the Regency, and then from September 6th, 1940, until his imposed abdication in December 30th, 1947. King Michael I, is known for his decision of August 23rd, 1944, to turn weapons against the Axis Powers. On December 30th, 1947 he was forced to abdicate and go into exile. He returned to his home country shortly after the Revolution of 1989, and then after 1997, when he supported the lobby for Romania’s accession to NATO and the European Union, being received with the highest honors by the European Royal Houses. On December 30th, 2007, he proclaimed the new Fundamental Norms of the Royal Family of Romania appointing his daughter, Princess Margareta as Crown Princess and Custodian of the Romanian Crown. He celebrated his Diamond Wedding and his 90 years Jubilee alongside the Romanian people, giving a speech to the united Chambers of Parliament and enjoying the unanimous appreciation of society.
His wife, Princess Anne of Bourbon-Parma, veteran of the Second World War, during which she actively served in the Free French army, along with the allied troops, received the Croix de guerre (French War Cross) for bravery.
She is recognized as Queen of Romania on marriage documents of June 10th, 1948, title further confirmed by the Fundamental Norms of the Royal Family. She has been at all times alongside the King, raising with him their five daughters, Princesses Margareta, Helen, Irina, Sophie and Marie. She entered the country after the revolution of 1989, being actively involved in Romanian society and culture, and in the development of the Crown Princess Margareta of Romania Foundation.

Romfilatelia thanks His Majesty the Kings Household for the documentary and photographic support offered in creating this postage stamp issue. 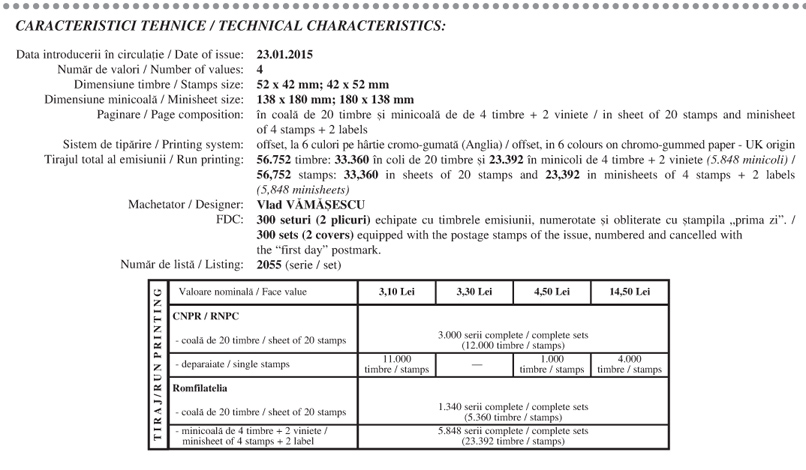