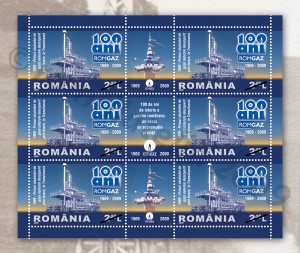 On the occasion of the 100th anniversary of the natural gas discovery on the territory of our country, Romfilatelia introduces into circulation the postage stamps issue ROMGAZ – 100 years (1909 – 2009).

We bring here special thanks to S.N.G.N. ROMGAZ S.A. Medias and Engineers Society of Natural Gas Field Medias for the documentary consultancy offered for the accomplishment of this philatelic issue.