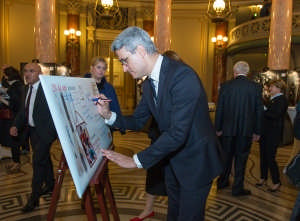 On Monday, October 24th, 2016, the Romanian Athenaeum hosted the anniversary event 20 years of activity SERA Romania Foundation, which marked two working decades of this nongovernmental institution, serving to protect the children in need.

The event included a series of moments which guaranteed an exceptional evening, based on a noble cause “Every child deserves a family”: the anniversary charity symphonic music concert, having the famous American pianist Alan Gampel as special guest, the photo exhibition dedicated to the work of the foundation, the philatelic moment of presenting the dedicated postal stationery and a cocktail which ended the evening successfully.

The host of the evening, Mr. Bogdan Simion, Executive Director of SERA Romania Foundation, had several special guests: Mr. Dragos Pislaru, Minister of Labour, Family and Social Protection for the Elderly, Ms. Arielle de Rothschild, President of the Board of Directors of the CARE France Foundation, Ms. Michele Ramniceanu, Board Member of the CARE France Foundation, members of the Chamber of Deputies, of the Diplomatic Corps, including H.E. Ms. Tamar Samash, the Israeli Ambassador to Bucharest. There were also representatives of the General Directorates for Social Assistance and Child Protection, guests from the business environment, as well as institutional partners of the foundation.

In order to support the activity of the Foundation, as well as celebrating its anniversary of 20 years of existence, Romfilatelia joined the festive moment by designing a postal stationery with a fixed stamp, wishing to be a loud voice for those causes that deserve to be heard.

Visually speaking, this envelope suggests the bond to the concept of putting a smile on every child’s face, by involvement and also by supporting the ideal “Each child deserves a family”, the motto under which the foundation operates.

Before the concert, Ms. Cristina Popescu, Romfilatelia’s CEO, invited the host of the event, Mr. Bogdan Simion, to sign the giant envelope – a copy of the postal stationery, together with Mr. Dragos Pislaru, Minister of Labour, Family and Social Protection for the Elderly, and Ms. Arielle de Rothschild, President of the Board of Directors of the CARE France Foundation.

The charity concert was sustained by young artists, such as Alan Gampel (USA), Ioana Cristina Goicea and Stefan Cazacu (Romania), by the orchestra “Virtuozii din Bucuresti”, conducted by Cristian Orosan.