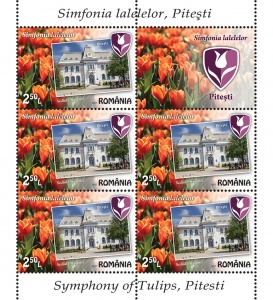 There is a city in Romania where, every spring, following a tradition of four decades, it  gets dressed in flowers. Specifically, colours and shapes full of grace and elegance that have made Pitesti a name associated with the idea of ​​city of tulips.

Due to the beauty and importance of events that take place here, Romfilatelia dedicates an issue of postage stamps Symphony of Tulips, Pitesti.

This issue is available starting on Friday, April 7th, 2017 in Romfilatelia shops in Bucharest, Bacau, Brasov, Cluj-Napoca, Iasi and Timisoara.

The tulip is a flower originating from Central Asia and Middle East and was brought to Europe in the sixteenth century in Turkey, being considered a luxury.

Presented in a variety of colours, tulips symbolize elegance and grace: it is said that the pink tulip brings best regards; the purple tulip reminds us about royalty and rebirth, while the yellow tulip stands for cheerful thoughts and sunshine; orange represents fascination and warmth; white asks for forgiveness; red signifies true love and romance.

The beauty of the flowers is completed by a series of social-cultural, artistic, sporting and commercial manifestations, reunited under the name of Symphony of Tulips, the 40th edition, that will take place in Pitesti, from 21st to 23rd of April, 2017.

The stamp issue consists of four values which depicts the images of four representative buildings for Pitesti, in terms of administrative, historical and cultural heritage, accompanied by the enchanting colours that the Symphony of Tulips pours over the city.

The postage stamp with the face value of Lei 2.50 illustrates Pitesti City Hall, which was built in 1933 as headquarters of the Financial Administration and became City Hall  starting 1968.

Built in Neo-Romanian style, the edifice has as author the architect State Cintan who combined archaeology and ethnography in his works, and was very susceptible to local architectural traditions. Thus, the central hall was conceived as a patio covered by a spectacular skylight.

The stamp with the face value of Lei 4 presents the County Museum, the former Palace of the Prefecture of Arges County, a beautiful Neoclassical building (1898-1899). It hosts significant evidence of the town’s history and that of Wallachia. Near the main building, two new modern buildings complement the museum.

The headquarters of the “Rudolf Schweitzer – Cumpana” Art Gallery is depicted on the postage stamp with the face value of Lei 4.50. The building was made in 1886, in the Neoclassical style, and it was the former headquarters of Pitesti City Hall, until moving to its current location, in 1968. The interior was done in French eclectic style, with a spacious hall and monumental staircase, which is in harmony with the sheltered valuable museum pieces. In its rooms are exhibited works of art by Nicolae Grigorescu, Stefan Luchian, Theodor Pallady, Gh. Petrascu, Rudolf Schweitzer-Cumpana and Nicolae Tonitza attracting visitors’ attention to significant moments in the history of Romanian fine arts.

The stamp with the face value of Lei 16 illustrates the Court of Appeal, a Neoclassical building from 1914. The architects Eracle Lazarescu and Arghir Culina designed a monumental construction, where light transforms into a genuine element of creation and animating the space through central hall skylight.

From visual point of view, the issue of postage stamps Symphony of Tulips, Pitesti combines the elements of architecture, culture and history with the freshness and gracefulness of spring flowers.

The issue is completed by a first day cover and as a page composition were used the sheet of 32 stamps, minisheet of 5 stamps + 1 label.

Romfilatelia thanks the Pitesti City Hall for the documentary support granted in the creation of this postage stamp issue.