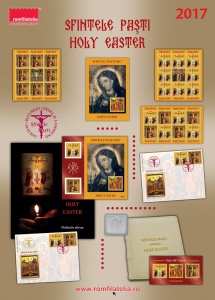 Pending the biggest holiday of Christianity, Romfilatelia continues the tradition of proclaiming the joy of the Resurrection through a unique philatelic project, made public in advance for stamps lovers.

This year, the postage stamp issue dedicated to Easter is even more special as the Orthodox Christians and Catholics celebrate the Resurrection of the Saviour on the same day. On this occasion, the project’s stamps present the iconographic reproductions belonging the two branches of Christianity.

Suggestively entitled Easter 2017 the postage stamp issue brings valuable philatelic items to the public attention, that support and enrich the theme of the project. They are available starting from Friday, March 10th,  2017, in Romfilatelia’s stores in Bucharest, Bacau, Brasov, Cluj-Napoca, Iasi and Timisoara and online at https://romfilatelia.ro/store/ .

The two postage stamps of the issue, having the face value of Lei 1,30, illustrate two icons of the Crucifixion.

The stamp illustrating the Crucifixion of Jesus Christ, from the “Radu Voda” Monastery heritage, is a representation known since the first Christian era.

The second stamp illustrates the Crucifixion icon belonging to the “Saint Joseph” Cathedral, in Bucharest. “Saint Joseph” Cathedral is the seat of the Archbishop Metropolitan of Bucharest, the living breath of the Catholic congregation in southern Romania, a historic, cultural and architectural monument enshrined in national and European heritage. Solemnity of “Saint Joseph, husband of the Holy Virgin Mary” was chosen as patron day of the cathedral and is celebrated every year on March19th.

The stamp of the perforated souvenir sheet, with the face value of Lei 12, illustrates the Resurrection icon, part of the Darvari Hermitage of Bucharest’s iconographic heritage. Full of symbols, the Resurrection – Harrowing of Hell icon of the Lord Jesus shows Him trampling the gates of hell. The Harrowing of Hell bears in itself the beginning of human exaltation, for which physical death is only a passage, a gateway to new life, eternal.

The icon of Our Lady of Sorrows – (souvenir sheet border) is part of the “Radu Voda” Monastery’s heritage.

The special products of the issue complete the project dedicated to the Holy Easter, conffering it value by creative elements as well as by its character of uniqueness due to the limited run printing in which they are available. Created in original graphic and artistic concepts, the special products are appreciated not just by collectors but by the whole audience that turns them into true collectibles and often gifts for loved one.

The philatelic album is created into a limited edition of 403 pieces and is equipped with the special block of the issue (containing two imperforated stamps and the souvenir sheet) as well as the First Day Cover with the “first day” postmark clearly imprinted in gold foiling, both products being numbered from 001 to 403.

The special philatelic product (with silver plated stamp) is an exclusive concept by Romfilatelia and created into a limited edition of 353 pieces. The silver plated stamp is a replica of the postage stamp of the issue’s souvenir sheet and is inserted into this product, next to the certificate of authenticity, and the special block of three stamps (the issue series together with the imperforated stamp of the souvenir sheet), numbered from 001 to 353.

Romfilatelia invites the larger audience to discover and enjoy in advance the elements of the project dedicated to the Holy Easter and thanks the Romanian Patriarchy, the Roman Catholic Diocese of Bucharest, the “Radu Voda” Monastery and the Darvari Hermitage for their documentary support granted in the creation of this postage stamp issue.