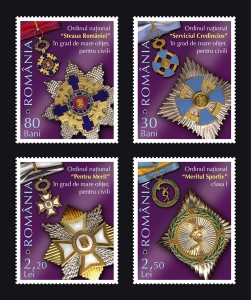 Soon after the Unification of the Romanian Princedoms of 1859, the ruler Alexandru Ioan Cuza was concerned about the idea of instituting orders and medals to be conferred to persons for services provided for the benefit of the country.
The first project for the setting up of the “Golden Wheat Ear”, inspired by the French “Legion of Honor”, due to the internal political events, could not be subject to vote. Then followed the institution of the “Pro Virtute Militari” medal for the survivors of the battle on Dealul Spirii (September 1848), a medal that Cuza shall no longer award in order not to disturb Turkey. Five years after the Unification, he wanted to institute a national order to be awarded on this anniversary and which was called the “Order of Unification”. This latter’s insignia were ordered at a jewelry house of Paris. Unfortunately, the house could not honor the order by the anniversary date, and meanwhile the chancelleries of Vienna and Istanbul found out about the intention of the Romanian ruler, arousing a true diplomatic scandal. In 1864, Cuza minted two more medals: “Military Virtue” and “Devotion and Courage”.
During the reign of Charles I, the Romania’s decorations system was created. Among the most important ones we mention the first Romanian order after the Proclamation of Independence, namely “Romanian Star”. It was followed by the medals “Loyal Service” and “Military Virtue”. After the Proclamation of the Kingdom, a second order is instituted, hierarchically situated under the “Romanian Star”, namely the “Romanian Crown”. At the same time, many other medals were instituted to reward the work of certain social categories, such as teachers, professors, policemen, priests, doctors, those who work in the trade and industry field.
During the reign of King Ferdinand and during the First World War the “Mihai Viteazul” Military Order, the “Military War Virtue” medal, the “Manhood and Faith” medal, the “Queen Mary Cross” Order and the “Sanitary Merit” Cross were instituted. After the war, in 1921, in all the countries of the Agreement (France, England, Serbia, Italy, Romania, United States of America), the “Victory” medal was instituted; each state minted its own medal based on a single type of symbol image, the rainbow ribbon being common.
King Charles II brought many changes to the decorations system, instituting, among others, the “Charles I” Order, “Ferdinand I”, “Aeronautic Virtue”, “Cultural Merit”, “Romania’s Eagle”, the Order and Medal “Bene Merenti of the Ruler’s House”, “Marine Medal”, “Saint George” Military Order.
After the forced abdication of King Michael I, on the 30th of December 1947, all the traditional symbols of the state were abolished, including the entire system of civil and military decorations in use until that date. The new decorations of the People’s Republic of Romania were copied by those of the Soviet Union and, after changing the name of the country into Socialist Republic of Romania, the created distinctions were modernized, partially renouncing to the Soviet red star, with five corners.
The orders now used were reinstituted based on Law no. 29 of year 2000, but for the “Romanian Star” Order, in order to cope with the external protocol needs, the Government enacted an Emergency Ordinance that subsequently became Law no. 77 of 1999.
The postage stamp with the face value of RON 0.30 represents the “Loyal Service” National Order, for the rank of Great Officer (for civilians).
The postage stamp with the face value of RON 0.80 represents the “Romanian Star” National Order, for the rank of Great Officer (for civilians).
The postage stamp with the face value of RON 2.20 represents the “For Merit” National Order, for the rank of Great Officer (for civilians).
The postage stamp with the face value of RON 2.50 represents the “1st Class Sports Merit” Order.
The philatelic issue “Romania’s Orders” was accomplished with the support of the Orders Chancellery of the Presidential Administration.