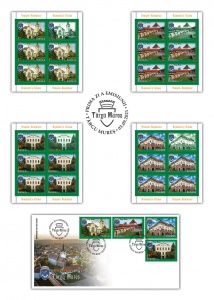 The four stamps of the series illustrate iconic monuments, built in a period of more than four centuries, from the end of the 15th century to the first years of the twentieth century.

On the stamp with the face value of Lei 1.50 is represented the Administrative Palace in Targu Mures. The edifice was built (like the nearby Palace of Culture) in the Art Nouveau architectural style, under the administration of Mayor György Bernády (1864–1938). The building plan was designed by architects Márcell Komor and Dezső Jakab from Budapest, followers of Ödön Lechner, pioneer and prophet of Art Nouveau in Hungary.

Initially, the Administrative Palace (1905-1907) was the City Hall of the Royal Free City of Targu Mures. Today it is the headquarters of the Local Council and the Prefecture of Mures County.

The main gate leads into the festive space of the vaulted lobby, where the ochre yellow and the pink marble combine spectacularly with the turquoise Zsolnay tiles and golden-green iridescences. The elegance is emphasized by the organic shapes of the marble columns and stairs railings, as well as the rosette-shaped decorations of the vaults. The mysterious chromatic of the lobby contrasts with the glow of Miksa Róth’s stained glass windows in the stairwell, representing an almost photographic image of the City Hall.

On the stamp with the face value of Lei 2 is illustrated the Medieval Citadel in Targu Mures.

The Citadel was the first fortified construction of the city, being built at the end of the 15th century under the command of voivode Stefan Báthory (1479-1493). Over time, the fortified ensemble has undergone numerous changes; in its current form, it covers an area of 4.3 ha.

In 2011, an extensive rehabilitation work began, financed by the European Union. At present, the Citadel houses the collections of local artists, exhibition halls and events, creative workshops, the Reformed Church, the Museum of Archaeology and History, the House of Marriages, premises for accommodation and restaurants.

On the stamp with the face value of Lei 5.50 is represented the Palace of Culture, built between 1911–1913. For the ornamentation and works of art in the building, the mayor of the city invited the renowned masters of the Gödöllő Artists’ Colony, Aladár Körösfői-Kriesch, Sándor Nagy, Ferenc Sidló, who were inspired by Hungarian mythology and history as well as elements of Transylvanian folk art. In the 800 seats concert hall, the Rieger organ perfectly evokes the romantic harmony with its delicate tonality. Decorated with motifs inspired by nature and elements of Transylvanian folk art, this space is unique by its spectacular appearance. The twelve stained glass windows in the Hall of Mirrors were made in Miksa Róth’s workshop in 1913 and are the main attraction of the Palace. The two triptychs in the hall represent scenes from Székely legends and from Transylvanian daily life, and the four central stained glass windows illustrate, with a vibrant chromatic, Hungarian folk ballads.

On the stamp with the face value of Lei 19.50 is represented the “Bolyai Farkas” High-School. It is the continuer of the Schola Particula traditions, an elementary school established in 1557 in the building of the former Franciscan Monastery in the Citadel. In 1718, students and teachers of the college in Sárospatak (Hungary) were admitted to the school following their expulsion due to religious conflicts. From that year, the school became a higher level institution, receiving the name of Reformed College.

Since 1804 Bolyai Farkas worked here, occupying the chair of mathematics. The “Bolyai Era” of the college culminated with the work of his son, Bolyai János, the creator of the first non-Euclidean geometry along with the Russian scientist Lobachevsky. In 1948, the Reformed High-School became a state high-school and in 1957, when the school celebrated four centuries of existence, the high-school took the name of professor Bolyai Farkas.

The second floor is almost twice as tall as a normal floor, here being the imposing hall of festivities. The entrance, together with the wide and arched windows, which get bigger as the levels rise, as well as the attics (low floors located under the roof), form the main attraction of the building. Since 2007, on the occasion of the five and a half century anniversary of the founding of the school, in the central attic is located, in a symbolic representation, the emblem of the school – an angel.

Romfilatelia thanks the Targu Mures City Hall for its documentary support granted in developing this postage stamps issue.

The postage stamps issue “Romania’s Cities, Targu Mures” will be available on Friday, 3rd of September 2021, in Romfilatelia’s shops network in Bucharest, Bacau, Brasov, Cluj-Napoca, Iasi and Timisoara and online on https://romfilatelia.ro/store/. 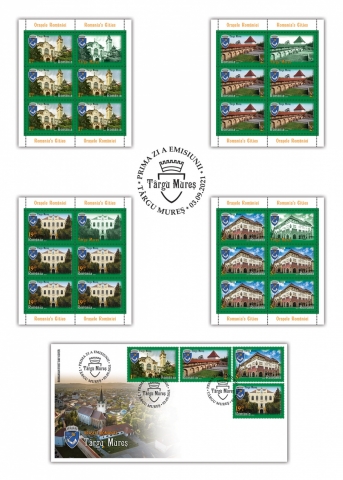 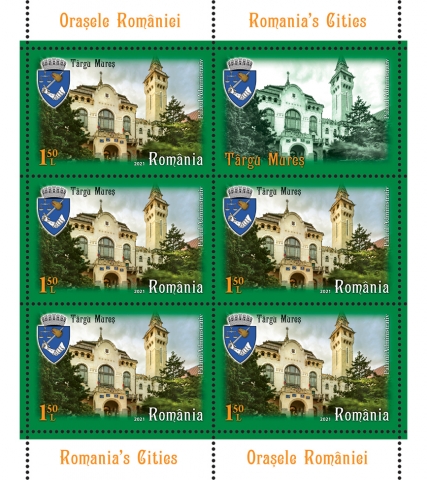 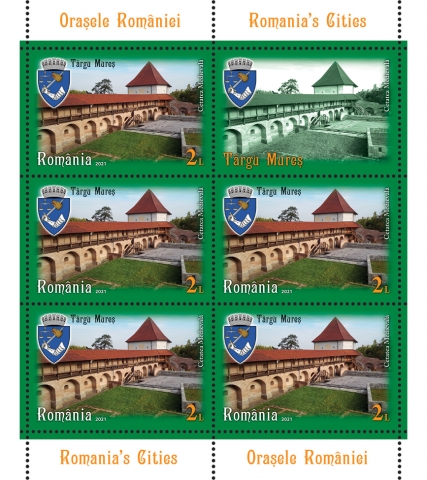 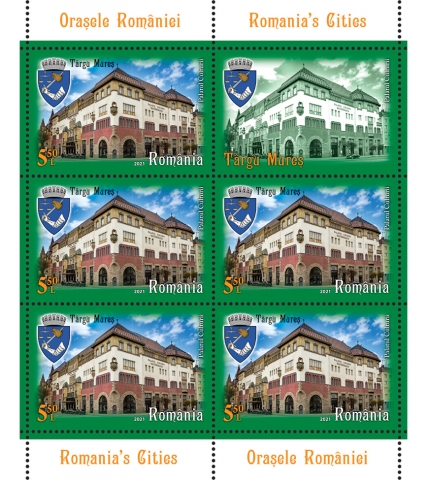 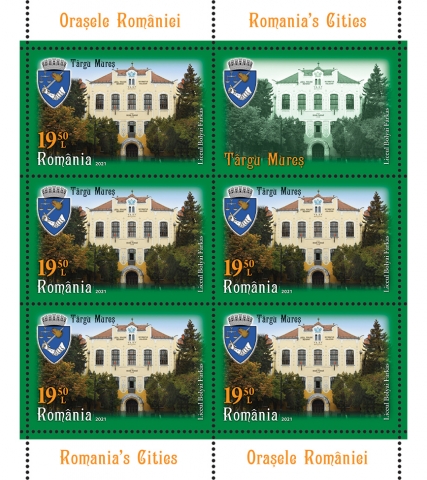 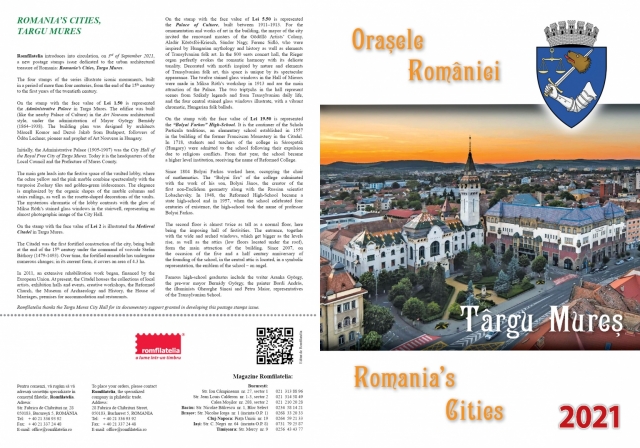 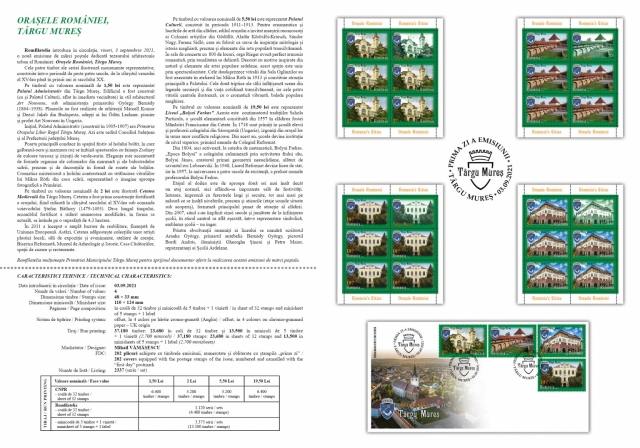 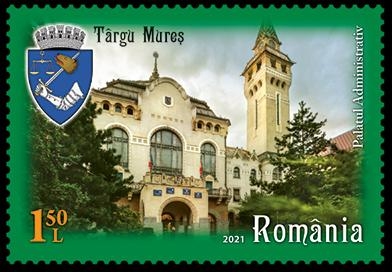 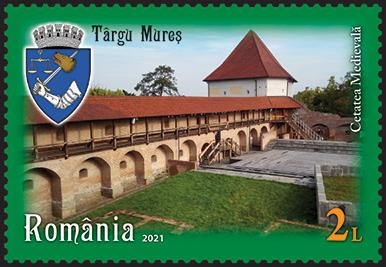 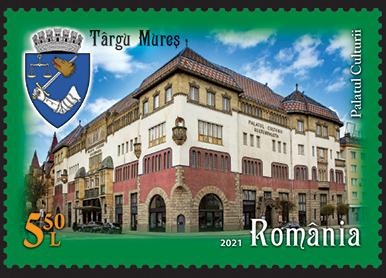 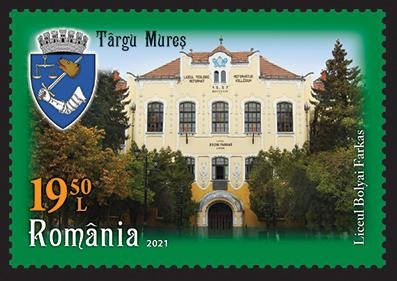